The Knight of the Sacred Lake Reader’s Guide 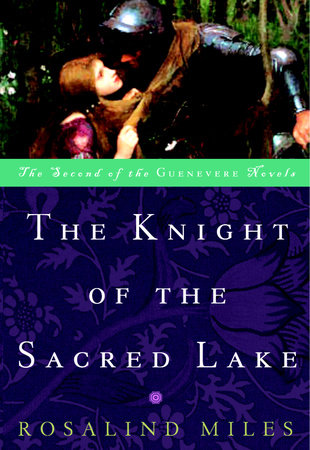 The Knight of the Sacred Lake Reader’s Guide

print
The Knight of the Sacred Lake Reader’s Guide

Guenevere — last in a line of proud queens elected to rule the fertile lands of the West, true owner of the legendary Round Table, and guardian of the Great Goddess herself — is a woman whose story has never been told. Long relegated to a passive role on the arm of King Arthur, Guenevere finally springs to life in this lavish retelling of one of the richest and most enduring epic tales of Western culture: the Arthurian legend. Rosalind Miles’s bold, magical interpretation re-creates the stirring pageant of love, war, heartbreak, jealousy, revenge, and desire from Guenevere’s perspective, capturing as never before her formidable power as a queen and her full-blooded passion as a woman. Rich in historical detail, the Guenevere Trilogy draws us into the inner life of a courageous and beautiful heroine, torn between the fires of her own heart and her devotion to her husband and her people. This guide is designed to help direct your reading group’s discussion of Rosalind Miles’s new perspective on a woman you only thought you knew.

About the Trilogy
When Guenevere, young Queen of the Summer Country, marries Arthur, High King of the Middle Kingdom and heir to the Pendragon dynasty, their union creates the largest and most powerful kingdom ever known in the Isles. Yet their golden era of political harmony and courtly love is not destined to last; a gathering darkness forebodes the evil and revenge that will plague Arthur and Guenevere’s reign. When Arthur’s long-lost half-sisters — princesses torn from their mother and their ancestral right by Arthur’s brutal and unscrupulous father, Uther Pendragon — arrive at court, chaos is unleashed in the form of Morgan Le Fay, whose black enchantments destroy everything Guenevere holds dear and threaten to separate the King and Queen forever.

Always at the center of the story is Guenevere, proud and powerful, yet vulnerable to the longings of her heart. When the young French prince, Sir Lancelot of the Lake, enters the scene, an otherworldly passion is ignited in Guenevere’s heart, and they each must contend with the painful reality that they cannot fulfill their love without shattering the code of chivalry and the man they both love with all their hearts, Arthur. Yet Arthur is not without demons: a bleak shadow falls across Camelot and across the sacred Isle of Avalon as he allows Roman priests to encroach on the kingdom, bringing with them a violent new religion that threatens to destroy the ancient ways of the Mother. And even in the sanctity of the court, all is not well, as betrayals, jealousies, and ancient blood feuds fester. The half-mad Druid Merlin plots furiously to ensure the supremacy of the Pendragon line at any cost; Morgan and Arthur’s incestuous progeny, Mordred, menaces the increasingly fragile peace; and the assembly of the famous Round Table of knights stands vulnerable to Morgan’s dark designs and the irresistible power of the forbidden love shared by Guenevere and Lancelot.

As the final, brilliant cycle of the Arthurian legend spins out, the Quest for the Grail and the fall of Camelot bring Guenevere to the brink of utter tragedy, where she ultimately may complete her destiny as the greatest Queen of the Isles and at last find her heart’s content.

1. The Guenevere Trilogy
The pervasive subtext of the Arthurian legend tells the story of Christianity’s hostile attack on an older, female-centered religion. In fact, the Christians are as much Guenevere’s enemies as is Morgan, if not more so, as they attempt to destroy the succession of queens and usurp Avalon’s sacred relics for their own use. How does this underlying battle affect your reading of the story? Does Miles do a good job of setting the historical record straight? Why or why not? What do you make of the Lady?

2. Throughout the Trilogy, we watch the fascinating and terrifying development of Morgan’s character: the defenseless, frightened creature sobbing in Arthur’s arms; the evil, hypererotic seductress; the havoc-wreaking shape-shifter, who appears at various times as a cat, a raven, a snake, a murderous knight, and a nefarious nun; and the bodiless, tormented spirit hovering in the trees, endlessly torturing Merlin. Are you ever able to sympathize with Morgan? Which is her most frightening guise? Are you able to accept her radical transformation at the end?

3. Greed is a powerful motivating force for many characters in the story. The Abbess Placida covets an authoritative position at Canterbury; Sylvester lusts for Arthur’s soul and Avalon’s treasures; Malgaunt wants control over Guenevere; Mordred wants to be king; Agravain wants undue power and recognition; Merlin wants his Pendragon bloodline to rule the world. Is Arthur greedy? Is Guenevere? Is greed a punishable offense in the universe of this story?

4. The theme of children separated from their parents seems to run throughout this story: Morgan and Morgause are wrested from Igraine; Arthur is taken from Igraine and Uther; Amir is lost by Guenevere and Arthur; Mordred is removed from Morgan; and Galahad is hidden from Lancelot. How do these separations, some more painful than others, mold each character? Why are they necessary? Do you think this theme symbolizes a larger issue?

Learn More About The Knight of the Sacred Lake
print

Guenevere, Queen of the Summer Country

The Raven and the Rose

While Beauty Slept
Back to Top