The Maid of the White Hands Reader’s Guide 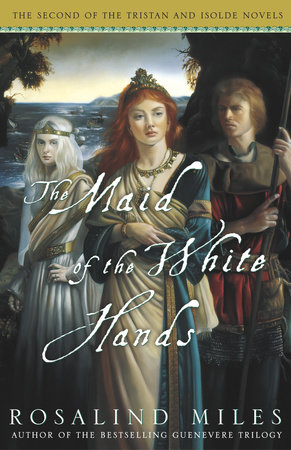 The Maid of the White Hands Reader’s Guide

print
The Maid of the White Hands Reader’s Guide

Tristan and Isolde, star-crossed lovers in the time of King Arthur, have been celebrated in poetry, song, and legend throughout the ages. In her stunning new trilogy, Rosalind Miles—bestselling author of the dazzling Guenevere series—sets the fated duo in a dynamic, freshly imagined epic of conquest, betrayal, and desire. Book One introduced the intoxicating Isolde, renowned healer and princess, and Tristan, her powerful yet tenderhearted knight, as their all-consuming love blossomed against a backdrop of international war and court scandal. Book Two finds Isolde crowned Queen of Ireland, even as conniving forces unite to undermine her power, while Tristan is coerced into a journey that will take him to the very edge of madness—and even death—before he is reunited with his one true love. This guide is designed to help direct your reading group’s discussion of master storyteller Rosalind Miles’s breathtaking The Maid of the White Hands.

Isolde’s queenly destiny reaches its apex when her tempestuous mother dies, leaving the Emerald Isle under her supreme rule. Isolde is now Queen of Ireland in her own right, as well as Queen of Cornwall through her dreaded marriage to King Mark, Tristan’s oafish uncle. Isolde is committed to protecting Ireland as one of the last strongholds of Goddess worship and Mother-right in the British Isles, yet behind her back, a handful of power-hungry knights hatch a scheme to topple the ancient succession of queens, while the growing Christian church threatens the age-old autonomy of women.

But there is another secret plot threatening the queen’s personal happiness. Across the sea in France, a beautiful young princess named after Isolde has determined that one knight and one knight only will suffice as her chosen husband: Tristan of Lyonesse. She is called “Isolde des Blanche Mains” for her lily-white hands and her reputation as a healer, but her soul is far from pure, and she will stop at nothing to separate Tristan from his queen, and make him her own. King Mark plays willingly into her plot when, addled with jealousy and goaded on by Tristan’s hateful cousin, he sends Tristan to France to recuperate from a jousting accident. Close to death, Tristan is unaware of the manipulation going on as his letters to Isolde are intercepted and he is tricked into marrying the vain and self-serving Blanche.

When Isolde hears the devastating rumors of Tristan’s betrayal, she sets sail for France to uncover the truth—and either reclaim her beloved knight or set him free forever.

1. What irreconcilable differences separate Breccan and his brother Tolen? Why does Breccan’s confrontation with Father Eustan and his monks lead to Tolen’s murder? Is the death ever avenged?

2. Merlin has only a brief cameo in this volume of the trilogy. What is the significance of his role? Does the dying queen trust him? Why does she accuse him of cherishing Arthur and Tristan above all others? What does she need Merlin to do?

3. Sir Greuze’s knights follow and obey him long after brain damage on the battlefield claims his sanity, even when they know he perpetrates gory crimes against women. Yet they claim to operate under the code of chivalry. Are there other cases in the story where you find fatal flaws in the rules of chivalry?

4. Three conflicts are brewing throughout the novel: Breccan is drumming up a coup to take the Irish throne; Andred and Elva are making a power play for the Cornish throne; and Dominian is launching an assault on non-Christians. Which attack gains the most ground by the end of the story? How do these plots threaten Isolde and Tristan’s love affair? What is Isolde’s strongest weapon in defending them?

5. Who is the knight promised to Isolde by the Lady of the Sea? Does the fact that Isolde needs to be rescued by a knight at the moment of her crowning undermine her power and authority as queen? What becomes of this savior figure? Who does he claim sent him?

6. Mark’s position as King of Cornwall is tenuous, since he’s technically only a vassal to Queen Igraine. From her perch in Tintagel, Igraine sees and hears everything. Why does she allow Mark to carry on being such a buffoon? Why doesn’t she put a stop to the unsavory influences on him, such as those of Andred and Dominian?

7. Isolde’s mother leaves her court and the nation of Ireland in total disarray when she dies. How well does Isolde put it back together?

8. Kedrin is baffled by his sister’s penchant for ruthlessly pursuing her desires. He thinks: “Treachery was the element in which Blanche lived. Indeed it was not treachery to her but common sense, to make sure that she got what she wanted, whatever the cost.” What do you make of Blanche? Are her father and brother too lenient with her? What does the Chevalier Jacque Saint Rocquefort see in her? Are you satisfied with Blanche’s happy ending?

9. Blanche has no problem convincing Tristan that she’s an innocent maiden being bullied by her father into a brutal marriage with Saint Roc. Can Tristan’s mental and physical exhaustion be blamed for his lapse in judgment? Or is he truly naïve? Where else in the story is Tristan questionable as a judge of character?

10. The Lady of the Sea commands Isolde to focus on her duties as queen and the work at hand, and to let Tristan fend for himself. Does Isolde succeed in obeying these instructions?

11. Isolde has the Sight, allowing her ominous glimpses of the future, and of Tristan’s whereabouts when they are apart. Does she consider the Sight a blessing or a curse? Does it ever mislead her?

12. In denying their affair and defending their innocence, Isolde and Tristan are essentially liars. Does this color the way you perceive them as protagonists? How do they get off the hook when they are cornered by Mark in an open trial at Tintagel? Does Igraine know the truth?

13. After his adventures escaping Duessa, Falsamilla, and Blanche, Tristan laments that he has failed Isolde. Do you agree, or is Tristan being too hard on himself? What were his alternatives?

From the Hardcover edition.
Learn More About The Maid of the White Hands
print

The Lady of the Sea

Lady of the Butterflies

The Tutor
Back to Top