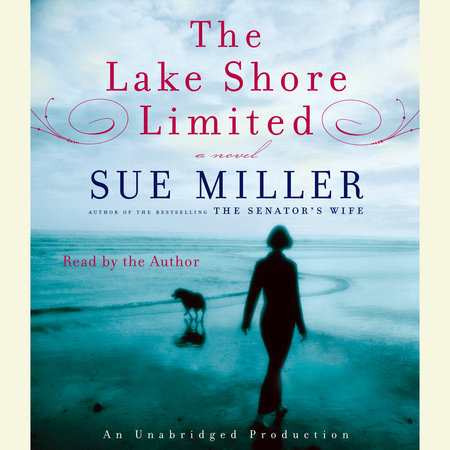 The questions, discussion topics, and reading list that follow are intended to enhance your reading group’s discussion of The Lake Shore Limited, bestselling author Sue Miller’s most satisfying and most ambitious novel yet.

“Miller’s take on post-9/11 America is fascinating and perfectly balanced with her writerly meditations on the destructiveness of trauma and loss, and the creation and experience of art.”—Publishers Weekly

Four unforgettable characters beckon you into this spellbinding new novel from Sue Miller, the author of 2008’s heralded bestseller The Senator’s Wife. First among them is Wilhelmina—Billy—Gertz, small as a child, fiercely independent, powerfully committed to her work as a playwright. The story itself centers on The Lake Shore Limited—a play Billy has written about an imagined terrorist bombing of that train as it pulls into Union Station in Chicago, and about a man waiting to hear the fate of his estranged wife, who is traveling on it. Billy had waited in just such a way on 9/11 to hear whether her lover, Gus, was on one of the planes used in the attack.

The novel moves from the snow-filled woods of Vermont to the rainy brick sidewalks of Boston as the lives of the other characters intersect and interweave with Billy’s: Leslie, Gus’s sister, still driven by grief years after her brother’s death; Rafe, the actor who rises to greatness in a performance inspired by a night of incandescent lovemaking; and Sam, a man irresistibly drawn to Billy after he sees the play that so clearly displays the terrible conflicts and ambivalence of her situation.

How Billy has come to create the play out of these emotions, how it is then created anew on the stage, how the performance itself touches and changes the other characters’ lives—these form the thread that binds them all together and drives the novel compulsively forward.

A powerful love story; a mesmerizing tale of entanglements, connections, and inconsolable losses; a marvelous reflection on the meaning of grace and the uses of sorrow, in life and in art: The Lake Shore Limited is Sue Miller at her dazzling best.

1. Have you read any of Sue Miller’s other books? If so, does The Lake Shore Limited share any themes?

2. What do we learn from the first sentence of this novel? Now that you know the character Leslie, what does it mean to you?

3. Who did you assume was the main character when you first started reading? Did you change your mind?

5. On page 8, Leslie wonders, “But was [possibility] necessary? . . . Weren’t there people, everywhere, who lived without it? Who didn’t imagine anything other than what was?” Ultimately, which of the characters are open to possibility, and which aren’t?

6. Discuss the marriages in the novel. What do they have in common? In what ways are they different? Which seems healthiest to you?

7. On page 50, Leslie realizes that “she had been asking [Pierce] whether he would come with her into what she thought of as this new life—and that he was telling her no.” How does Leslie react to this? Why?

9. What do you think Miller is trying to say about the creation of art and its reflection of real life?

10. The notion of playing a role is a recurrent theme in the novel. Who is most true to his or her authentic self? Who has mastered his or her role? Whose changes most drastically?

11. Why is the Henry James reference in the play (page 54) so important? What was Billy trying to say?

12. When Rafe asks Billy if the play is based on her own life, she insists it isn’t autobiographical (page 91). Is she intentionally lying, or is there something else going on here?

13. Why does sleeping with Billy affect Rafe’s performance in the play?

14. Both Rafe and Sam see themselves in Gabriel. Which man do you think is more like him? Why?

15. What does Gus represent to Billy? To Leslie? What role does grief play in the novel?

16. Over the course of the novel, various characters note that Billy looks like a child. What does this signify?

17. Why do Sam and Leslie stop at just a kiss (page 224)? What do you think would have happened if they had had an affair?

20. On page 278, Leslie thinks, “But that’s what the play was about. . . . At least in part. The wish to imagine what life could be, how it could change, if you were unencumbered.” What do you think the play was about? Which of the four main characters most wishes for an unencumbered life?

21. Reread the alternate endings Billy considered for the play (page 300). Why do you think she chose to end the play the way she did?

22. On page 319, Miller writes, “Now as Sam sits in his living room, holding the Christmas letter from Emma, thinking of Melanie Gruber, he realizes that he’s called her up in part because he feels the same way about Billy, about the accident of Billy’s arrival in his life—exactly that surprised.” Why does he feel this way? How does it change him?

23. Discuss the ending. Was it satisfying? What do you imagine happens next?

Sue Miller is the author of the novels The Senator’s Wife, Lost in the Forest, The World Below, While I Was Gone, The Distinguished Guest, For Love, Family Pictures, and The Good Mother; the short story collection Inventing the Abbotts; and the memoir The Story of My Father. She lives in Boston.

The Last Time I Saw You by Elizabeth Berg; The Last Time They Met by Anita Shreve; Back When We Were Grownups by Anne Tyler; Two Truths and a Lie by Katrina Kittle; So Long at the Fair by Christina Schwarz; Three Junes by Julia Glass
Learn More About The Lake Shore Limited
print

The Unchangeable Spots of Leopards

Companion Piece
Back to Top