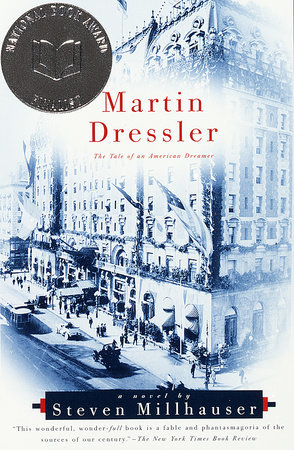 The questions, discussion topics, and author biography that follow are intended to enhance your group’s reading of Steven Millhauser’s Martin Dressler. We hope they will enrich your understanding of this spellbinding tale of genius and obsession, winner of the 1997 Pulitzer Prize for fiction.

It is the late nineteenth-century, "when on any streetcorner in America you might see some ordinary-looking citizen who was destined to invent a new kind of bottlecap or tin can, start a chain of five-cent stores, sell a faster and better elevator, or open a fabulous new department store" [p. 1]. In New York City, new buildings are bursting from the Manhattan bedrock every day, the city changing and reinventing itself at an almost incredible rate. One of the most extraordinary of the city’s many extraordinary entrepreneurs is young Martin Dressler, a cigarmaker’s son who possesses the strength and the good fortune to turn his dreams into reality. We watch as he becomes the model capitalist, rising meteorically from bellhop to founder and proprietor of a string of increasingly fantastic hotels; and we witness his strange enchantment by two sisters, one of whom becomes his companion and business partner, the other his ghostly, elusive bride. Finally, as Martin brings his dreams to their ultimate fruition in the Grand Cosmo hotel, a structure so rich and complex it comes close to rivaling the world itself, this mesmerizing novel brings us face to face with the darker aspects of the American dream, in a denouement that is itself magnificently dreamlike.

1. The first paragraph of Martin Dressler is written as though it were the introduction to a fairy tale. Could this novel be described as a fairy tale? In an interview (Publishers Weekly, 5/6/96), Steven Millhauser said that with the Grand Cosmo, "I wanted to stretch the real into the fantastic without actually snapping it." At what point does the narrative depart from the real and become fantastic?

2. Why does the troupe of actors at the Vanderlyn [pp. 11-12] make such an impression on Martin’s imagination? What do they symbolize to him? At what points in his life does the image of the two feet on the bed come back to him, and how does that image affect his decisions?

3. What is it about Caroline, apart from her sexuality, that attracts and fascinates Martin? How would you describe or characterize Caroline? Does her air of mystery cover secret passions, or is she simply stupid and inert? What do you think she really wants from life? What are her feelings toward Martin?

4. Why does Martin find it impossible to look on Emmeline in a sexual light? To what degree does Emmeline share and believe in Martin’s dreams? Is it possible to deduce her own feelings for Martin? What is significant about the evening visit she and Martin pay to the building site for The Dressler [pp. 201-202]?

5. What roles does Martin mentally assign to the various women in his life: Mrs. Hamilton, Alice Bell, Dora and Gerda, Marie Haskova, Caroline, Emmeline, Mrs. Vernon? Does Martin compartmentalize love and sex, and if so, what effect does that compartmentalization have upon his emotions?

6. How would you describe the four-way relationship between the three Vernon women and Martin?

7. Why are Caroline and Emmeline so dependent upon each other? Martin feels that Caroline is married to her sister rather than to himself, even that a fairy-tale spell has been cast upon them. Can you think of any fairy tales with a complementary pair of sisters like Caroline and Emmeline? Why might Millhauser have chosen this pattern, and what does it mean?

8. Why does Martin compare Harwinton with God? How have the theories and opinions of Harwinton, and those who followed him, characterized the twentieth century and how do they continue to rule our world?

9. Mr. Westerhoven likes to call himself a "preserver" or "reconciler" [p. 116]. What does he represent to Martin?

10. Martin Dressler is subtitled "The Tale of an American Dreamer." Why is Martin described as a dreamer, and what is his dream? What has this novel to say about the American dream and the quintessential American myth of the self-made man? What are the causes of the dissatisfaction Martin often feels, as on page 129, "he felt, even as he turned over the idea of a fourth cafe in Brooklyn, a little sharp burst of restlessness, of dissatisfaction, as if he were supposed to be doing something else, something grander, higher, more difficult, more dangerous, more daring"?

11. Martin is well aware that the grand hotels of his youth embody a paradox: they must be both old-fashioned and aggressively modern. "People liked telephones and the new electric elevators and private toilets and incandescent lights, but at the same time they liked old-world architecture, period furniture, dim suggestions of the very world that was being annihilated by American efficiency and know-how" [p. 70]. What does it say about people’s desires and dreams to want the old with the new?

12. When Martin is a child, one of his tasks is to wheel Tecumseh out onto the sidewalk. How does the image of the cigar-store Indian change and develop over the course of the novel? In what guise do Indians appear in the Grand Cosmo, and what does that appearance tell us about how Martin’s life, and the world itself, has changed during the intervening years?

13. Is it possible to compare Martin’s fantasy of "a world within the world, rivaling the world" [p. 284] with the contemporary notion of the "global village"?


14. How does Martin’s dream compare with the dream of Walt Disney? How do both the Grand Cosmo and Disney World aim to create alternate worlds that are self-contained and even better than the outside world? How do both of these institutions encourage a blurring in the distinction between "real" and "fake," and what are we to infer from the presence of "authentic German cigarmakers" at the Grand Cosmo Cigar Store?

15. Why does Martin hire an actor to impersonate him in the Grand Cosmo?

16. The Grand Cosmo is so enormous that no one knows what goes on in its further reaches, and rumors are spread by journalists. "But whether the writers spoke of the imaginary world beneath the building, or of the many worlds within, they all acknowledged, even in their puzzlement, a sense not simply of abundance or immensity, but of the inexhaustible" [p. 273]. Is this notion of inexhaustibility a metaphor for America, particularly the industrial and post-industrial America of the twentieth century? What images most completely characterize Millhauser’s America?

17. Considering Martin’s personality and his ambitions, was the ending inevitable? At what point does the end become obvious and why? What does Martin mean when he reflects that the Grand Cosmo is "an act of disobedience" [p. 281]?

Steven Millhauser attended Columbia College and pursued graduate studies at Brown University. His first novel, Edwin Mullhouse, was published in 1972; since then he has published three volumes of short stories and three novels, the most recent of which is Martin Dressler, which was awarded the Pulitzer Prize for fiction in 1997. Mr. Millhauser has also received the Lannan Award and has been honored by the American Academy of Arts and Letters. He lives with his wife and two children in Saratoga Springs, New York, and teaches at Skidmore College.
Learn More About Martin Dressler
print

The Emperor’s Children
Back to Top