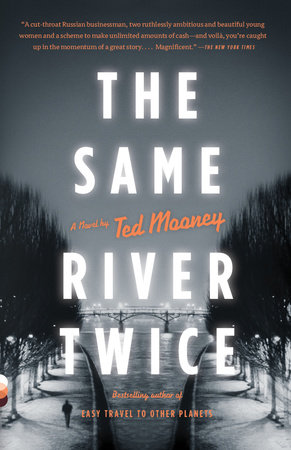 The questions, discussion topics, and suggestions for further reading that follow are designed to enhance your group’s discussion of Ted Mooney’s dazzling new novel, The Same River Twice. At once a race-to-the-finish thriller and a work of literary fiction, Mooney’s book, set largely in the Paris of the mid-1990s, examines the way lives intersect as the old world order falls away and people are left wanting to believe that “a new life was possible, even if not for [them].”

When Odile Mével, a French clothing designer, agrees to smuggle ceremonial May Day banners out of the former Soviet Union, she thinks she’s trading a few days’ inconvenience for a quick thirty thousand francs. Her independent filmmaker husband, Max, is ignorant of her clandestine activities and distracted by his quest to find out who released unauthorized copies of his first film with a completely different ending. As the details of the couple’s escapades prove ever more connected in a web of Russian mafia and high crime, their marital deceptions begin to multiply, leaving them to confront exactly what they are willing to do for the sake of their marriage—and their lives.

1. The first two chapters of The Same River Twice are devoted to Odile and her American husband, Max, respectively. What is your first impression of each character? When Odile reflects on the very first page that “all was not well at home,” what is she referring to? Does Max see this problem in the same way? How close do Max and Odile seem to each other, as a couple? What part does money play in their current situation? How do their respective professions affect their way of viewing the world and each other? At what cost or to what benefit?

2. In the second chapter, we learn how Max and Odile met, apparently by accident. How much can we confidently infer from Max’s recollection of this encounter? What isn’t said? Compare this meeting with the story (mulled over in passing by Turner in Chapter 6, p. 54 ) about the one woman besides Odile with whom Turner was unquestionably in love, the one who prompted his move to Paris. What light, if any, do these two encounters shed on Turner and Odile’s relationship? On Odile and Max’s?

3. The faculty of sight—vision in all its aspects—plays a central role in the book, both thematically and structurally. Most obviously, Max is a filmmaker, obsessed with light; Odile a clothing designer; and Turner a dealer in fine art objects. In what other ways do visual concerns inject themselves into the story line of The Same River Twice? Consider also the author’s writing strategy: though we are often privy to the thoughts of Odile, Max, or Turner in a given scene, much of the time the author simply shows us—to an almost cinematic degree—what they do, leaving it up to the reader to determine the motive, meaning, and likely ramifications of their actions. Why do you think the author chose this method of advancing the story? Does it clarify or obfuscate? Enrich the story or detract from it? What part does ambiguity play in the book?

4. In Chapter 2 (p. 15), we are told that Max thinks of Jacques, his studio assistant, as “a true child of the image age.” What do you think he means by this?

5. During the course of the book, Odile experiences periodic episodes of déjà vu, and, toward the end, Allegra, Max’s daughter from his first marriage, develops the same tendency. What function does this “misfire of the mind,” as Max calls it (p. 242), serve in the book? What other “quirks of consciousness” do the characters experience? Taken together, what do all these small slippages of reality suggest?

6. Many objects, images, actions, or phrases reappear again and again throughout the book. The queen of spades, for example, comes up variously on pp. 118, 120, 142, 186 (absent where it’s expected), 238, and 305. The card does not seem to be a symbol of anything. Why, then, does it recur like this? What does the repetition suggest? Similarly, the image of a bear is invoked in various ways on pp. 9-10, 90, 122-23, 166, 265, 300-301 and 349. In what ways do these allusions to bears illuminate one another? Or are they merely arbitrary? Consider especially the repeated references to the music of Heinrich Biber (pp. 33, 39, 222, 223, 312, 350). Does the recurring allusion to “a small sonata” by Biber function in the same way as the frequent reappearances of the queen of spades and the bear? And what about all such repetitions—there are many others—taken collectively? Do they imply something else?

7. On p. 56, Turner watches part of a film in which “a scarlet-haired woman in her twenties race[s] frantically through the streets of Berlin. If she didn’t raise a hundred thousand deutschmarks in the next twenty minutes, her boyfriend, who was supposed to deliver the money to her gangster boss, would be killed. Small obstacles in her path—a flock of nuns, a boy on a bicycle, some workmen carrying a sheet of plate glass—kept delaying her and made it seem certain that she would fail to get the money to him on time.” Then, much later (p. 203), when Odile is chasing down Turner’s assistant, Gabriella, in the streets of Bastille, she encounters exactly the same obstacles—in the real world—and they cause her to lose track of Gabriella momentarily. The author calls no attention to this duplication, but since The Same River Twice offers many similar leakages from one reality to the other, the device appears to be intentional. What do you think these crossover moments imply about the world we live in?

8. A great number of films are mentioned directly or “quoted” by the action in the book. Do they share any particular qualities that set them apart as a group?

9. Max makes an open-ended promise to Odile on p. 37, and, when he realizes the time has finally come to keep that promise (p. 322), he feels “immense relief,” even though its fulfillment will prove to be immensely burdensome. What’s going on here? Do the events that immediately follow change your view of his and Odile’s marriage, or do they confirm it? How?

10. Given all that you know by the end of the book, do you think Odile was genuinely in love with Turner during their affair? Or was she using him in some way? Or possibly just being frivolous? Don’t answer too quickly.

12. In Chapter 35, we find ourselves inside Turner’s mind, sharing his every thought as he dies. How do his experiences in passing from life to death reflect the book as a whole? Do the conclusions to which he comes (e.g., that “Odile had cared for him”) seem to you real or delusional?

13. Max kills Turner without even asking Odile why she wants him dead, though in fact Max has only the sketchiest idea of what’s actually going on. And yet we know his relationship to Odile is hardly a passive one. How does this affect your view of his character? Of their marriage? Have you ever trusted or loved someone enough to do something unthinkable for him or her without the slightest question or hesitation?

14. Who in this book do you consider to be guilty of an immoral action or crime? Why?

15. Can a couple go on to have “a new life” together (as Odile and Max apparently do) while still sharing a terrible secret of which they never speak? Have you ever shared an unspeakable secret with someone, never once alluding to it after the event in question took place? Did the silence affect your relationship? Positively? Negatively? How?

16. Do you come away from the book feeling that lives are determined by fate, free will, or accident? Why? In the West, “fate” is usually considered an antiquated or romantic notion, while “accident” is seen, at least by secular society, as the true shaper of lives. In what ways does The Same River Twice make the case that “accident” is nothing more than fate’s preferred disguise?

Ted Mooney is the award-winning author of the novels Easy Travel to Other Planets, Traffic and Laughter, and Singing into the Piano. He was born in Dallas, grew up in Washington, D.C., and now lives in Manhattan.

Me and Kaminski
Back to Top