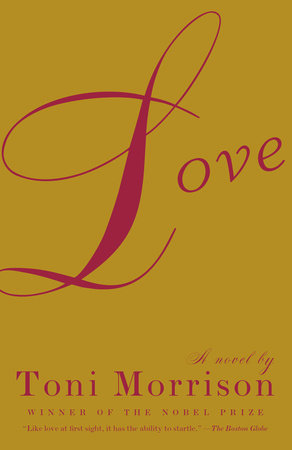 “A deeply affecting work by a Great American Novelist who is still at the top of her form. . . . Morrison’s tender, taut prose wastes no word, no syllable, no letter. . . . A novel of devastating revelations, impeccably arranged.” —The Atlanta Journal-Constitution

The introduction, discussion questions, suggestions for further reading, and author biography that follow are designed to enhance your group’s discussion of Love, the searing new novel from Nobel Laureate and Pulitzer Prize winner Toni Morrison.

Love tells the story of Bill Cosey and the women who love him, fight over him, make him miserable, and finally drive him to his grave. As the novel begins, Mr. Cosey has long-since died under suspicious circumstances, but his memory and his presence live on inspiring a deep and lasting hatred between his granddaughter Christine and his widow Heed. As youngsters, Christine and Heed were best friends until the day Mr. Cosey decided he would take Heed, at the tender age of eleven, for his wife. From that moment, bitterness and envy drove the friends apart, and now they live together in an enmity so deep and so rancorous that it seems only the death of one or both will free them from it. Mr. Cosey’s will—a handwritten note scrawled on a menu in 1965—is in dispute, as is the ownership of the house Heed claims to own and in which Christine is allowed to live. The struggle to verify or nullify that note drives the women to new depths, and when a street-smart young woman named Junior arrives to help Heed write a family history, Christine rightly senses a deception, and their dispute takes on a deadly urgency.

But Love is about much more than a disputed will and divided affections. It is about love itself, in all its glorious and ruinous incarnations, from compassion to lust, and it is about family, history, race, gender, and all the ways these forces shape and often distort an individual’s life. Love is also about what to make of a man like Bill Cosey, a man who created a resort where black people were treated with respect and could debate “death in the cities, murder in Mississippi, and what they planned to do about it,” a man who took families off the plantation and gave them jobs, but also a man who married an eleven-year-old child and then fell in love with a prostitute named Celestial. He is a rich, complex character, hard to understand, hard to condemn, hard to condone.

Written with the grace, insight, and power that have characterized her work from The Bluest Eye to Beloved and Paradise, Love is a brilliant cautionary tale in the inimitable voice of one of the world’s literary masters.

1. Why has Toni Morrison chosen Love as the title for her novel? In what ways is the book about love? What kinds of love affect and afflict its characters? What does the novel, taken as a whole, suggest about the nature of love?

2. The main narrative of Love is framed by and interspersed with L’s italicized reflections. Why does Morrison use this framing device? How does it affect the way the book is read? Is L’s interpretation of events the most reliable one? From what vantage point does she speak?

3. L claims she needs “something better” than an “old folks’ tale to draw on. . . . Like a story that shows how brazen women can take a good man down” [p. 10]. Is that what Love is mainly about? Is Cosey brought down by brazen women? Why would L think so?

4. Throughout the novel, Romen struggles to find his real self. When he refuses to join his friends in gang-raping a woman at a party, he does not understand at first why his heart bursts for “a wounded creature” and wonders, “What made him do it? Or rather, who? . . . But he knew who it was. It was the real Romen who had sabotaged the newly chiseled one” [p. 49]. Where else in the novel is Romen torn between lust and compassion? Which finally wins out in him?

6. Junior tells Heed that she’d “swallow lye before I’d live with my folks.” Heed recognizes the feeling, “We’re both out here, alone. With fire ants for family” [p. 127]. Why is family, in the novel, so often a source of misery?

7. When the Administrator at the Correctional institute pressures Junior for a sexual favor, she pushes him off the balcony. What are the short-and long-term consequences of this act for Junior? Why is she treated like a criminal for protecting herself?

8. How does the burgeoning civil rights movement affect the characters in the novel? What role does it play in May’s madness and in the decline of Mr. Cosey’s hotel?

9. Sandler thinks to himself that everyone forgave Cosey everything. “Even to the point of blaming a child for a grown man’s interest in her. What was she supposed to do? Run away? Where? Was there someplace Cosey or Wilbur Johnson couldn’t reach”? [p. 147]. In what ways are Heed and the other women in the novel trapped not only by racism but by the power men wield over them? Which seems to be the more oppressive force?

10. What destroys the friendship between Heed and Christine and turns them into the bitterest of enemies? What enables them to reconcile at the end of the novel?

11. Why is Mr. Cosey so drawn to the prostitute Celestial? Why would he want to leave everything to her?

12. In the novel’s climactic scene, Christine tells Heed, “It’s like we started out being sold, got free of it, then sold ourselves to the highest bidder.” Heed responds, “Who you mean ‘we’? Black people? Women? You mean me and you?” [p. 185]. Who does she mean? Is it true that blacks, or women, or Christine and Heed, have been sold and then freed, only to resell themselves?

13. Near the end of the novel, L says of Cosey, “You could call him a good bad man, or a bad good man. Depends on what you hold dear—the what or the why. I tend to mix them” [p. 200]. What kind of man is Cosey finally? What are his good and bad traits? Has he brought more happiness or suffering into the world? How disturbing is it that he marries an eleven-year-old girl?

14. What does Love, as a whole, suggest about the relationship between history, family, race, and gender? How are the individuals in the novel affected by these larger forces? What does the novel reveal about the particular historical moment in which it is set?

Toni Morrison is the Robert F. Goheen Professor of Humanities at Princeton University. She has received the National Book Critics Circle Award and the Pulitzer Prize. In 1993 she was awarded the Nobel Prize in Literature. She lives in Rockland County, New York, and Princeton, New Jersey.

Until I Find You

Expensive People
Back to Top