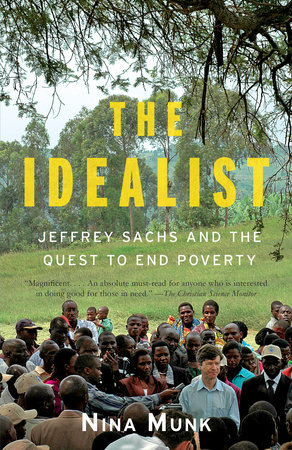 In the fall of 2006, Nina Munk spent six months traveling through sub-Saharan Africa with Jeffrey Sachs while on assignment for Vanity Fair. Her article on Sachs’s Millennium Villages Project, an ambitious campaign to eradicate global poverty, was published in the July 2007 issue of the magazine. In it, Ms. Munk explained Sachs’s systematic approach to the Millennium Villages Project: for five years, $120 would be allocated, per person, per year, to implement basic interventions in the villages such as high-yield seeds and fertilizer, better schools, improved health care and sanitation, bore wells and protected springs, and mosquito nets. The goal was to show that the same basic model could be used on a grand scale, globally, to lift hundreds of millions of people out of extreme poverty and onto “the first rung of the ladder of economic development.” For the next six years, Ms. Munk continued to accompany Sachs on his trips to Africa and visited various Millennium Villages on her own. In particular, she immersed herself in lives of villagers from Dertu, Kenya, and Ruhiira, Uganda, to witness firsthand how the Millennium Villages Project would transform these communities.

In her six years shadowing Jeffrey Sachs, Munk came to understand the real-life issues that challenge his formula for ending global poverty. The Idealist is the profound and moving story of what happens when the abstract theories of a brilliant, driven man meet the realities of human life.

1. In 2000, Jeffrey Sachs told a reporter, “Economists say, ‘Reform the value-added tax. Get the budget deficit down. Open the borders.’ That’s great stuff if you happen to be Poland. But it’s not the answer if you happen to be Tanzania.” What did he mean by this?

2. What sort of lasting impact did the Shifta War have on displaced ethnic Somalis in Kenya?

4. In Jeffrey Sachs’s paper “Ending Africa’s Poverty Trap,” published by the Brookings Institution in 2004, he posits that “there has been too little aid to make a difference” in overcoming the “Poverty Trap.” What are some of the factors contributing to the “Poverty Trap?”

5. What are some of the challenges that Dertu faced that other Millennium Villages didn’t have to contend with?

6. How did Ahmed Mohamed’s background prepare him for his role with the Millennium Villages Project in Dertu?

8. Munk observes that the farther away a person lives from the market in Garissa, the more likely they are to be shortchanged or exploited when going to sell their livestock. There were similar market inefficiencies in Ruhiira with the matoke boys. How did the Millennium Villages Project attempt to improve these situations?

9. What were some of the main barriers when trying to transition to commercial agriculture in both Dertu and Ruhiira?

10. How did the Millennium Villages Project factor in local customs and culture when tailoring its plans? What were some of the things they overlooked?

11. How did the Millennium Villages Project gauge progress?

12. What role do you think idealism should play in foreign aid?

13. Ruhiira has been held up as one of the Millennium Villages that made the most impressive strides. Do you think the gains will be sustainable? Why or why not?

14. How did morale in the villages affect the project? Do you think Ahmed and David dealt with these issues effectively?

16. What steps did David and Ahmed take to help villagers launch business ventures?  What setbacks did they experience in this area?

17. In some cases, the Millennium Villages provided low-interest loans to small-hold farmers to buy high-quality seeds and fertilizer. Why did some of the farmers fail to hold up their side of the “mutual accountability” bargain?

18. As Ahmed spends less time in Dertu, his deputy, Idris Kolan, takes on a bigger leadership role. How did his methods differ from Ahmed’s? Who was more effective?

19. What are some of the complaints that the villagers of Dertu make against the Millennium Villages Project? How do these compare to the criticism of economists and development workers, generally?

20. The Millennium Villages Project refers to “artifacts,” which are unexpected disturbances outside the project’s control. What are some examples of these artifacts, and do you think anything could be done to lessen their negative impact?

21. How did the 2008 financial crisis affect the Millennium Villages Project?

22. Can you draw any lessons from the Millennium Villages Project and apply them to development or revitalization initiatives closer to home?

23. The Millennium Villages Project is referred to as a scientific experiment on several occasions. In what ways is this an appropriate comparison and how is the project at odds with standard scientific methods?

24. In the second phase of the project, funding from the Millennium Villages Project was cut back. Going forward, according to the project’s plan, interventions would increasingly be paid for by local governments and foreign aid donors. Why was this plan not realistic?

25. The Millennium Villages Project is scheduled to end in 2016. Do you think there will be marked improvement by then? What sort of metrics or results would you need to see to support a continuation of the project?

A Force So Swift
Back to Top