Too Much Happiness Reader’s Guide 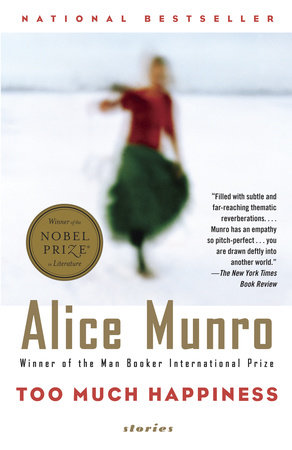 Too Much Happiness Reader’s Guide

print
Too Much Happiness Reader’s Guide

The questions and discussion topics that follow are intended to enhance your group’s conversation about Alice Munro’s Too Much Happiness, which won the Man Booker International Prize in 2009.

In these ten stories, Munro extends and deepens her vision of the mysterious and sometimes devastating effect of the bonds between people—friends, lovers, husbands and wives, parents and children, even strangers. Moving from the familiar territory of Canadian villages and towns to the cities of late nineteenth-century Europe for the title story, she takes her readers into the lives and minds of women from various walks of life, as well as into the minds of several men—one whose life has been shaped by a disfiguring birthmark, two who have murdered family members, one who has an unusual gift for manipulating younger women. Surprising, often disturbing, always psychologically acute, these stories are a gift of wisdom and clarity from one of the genre’s greatest masters.

1. Dimensions
As in her earlier story “Runaway,” Munro examines the effects of the psychological domination of one person by another. Why does Doree visit her husband in jail? Lloyd’s letters are a central part of the story: why does his notion that he has seen the children in another “dimension” (page 29) bring a kind of comfort to Doree? Does her thought that Lloyd, “of all people, might be the person she should be with now” (page 30) seem sensible, or dangerous? When she is on her way to the prison once again, Doree miraculously resuscitates a young man: how does this act connect to the title, and what does the final scene suggest about her future?

2. Fiction
From whose point of view is this story told, and how does this shape our understanding of events? Edie has “a mind that plods inexorably from one cliché or foolishness to the next . . .” (pages 40–41). How might it be possible for Jon to prefer Edie to Joyce? In part two, how does Joyce feel when she reads about herself in Christie’s story? What is revealed by the child’s perspective? What does Joyce learn about herself that she hadn’t known, or had forgotten? Is it fitting that Christie doesn’t remember Joyce?

3. Wenlock Edge
Hearing Nina’s life story, the narrator says, “Her life made me feel like a simpleton” (page 72). Does this explain the narrator’s willingness to comply with Mr. Purvis’s requests? Why do you think Munro has chosen “On Wenlock Edge” (from A. E. Housman’s A Shropshire Lad) for the narrator to read to Mr. Purvis? How are the narrator’s feelings about literature, poetry, and the university library changed by her encounters with Nina and Mr. Purvis? Why does she send Ernie’s address to Mr. Purvis, and what does she gain by doing so? What details or events are most troubling in this story, and why?

4. Deep-Holes
As the family picnic begins, Sally finds herself in a dangerous place, “nearly crying with exhaustion and alarm and some familiar sort of seeping rage” (page 96). How would you describe Sally’s husband, and her marriage? Why does Kent leave home and refuse contact with his family? Why does he choose to live as he does (pages 109–17)? What effect does her meeting with Kent have upon Sally (pages 116–17)? What does the story’s title signify?

5. Free Radicals
Like “Dimensions,” this story presents an intimate view of someone who is capable of murdering his family. But it’s also a story about ordinary mortality: Nita’s husband has died of a heart attack, and she is suffering from liver cancer and may not have long to live. How does Nita cope with the idea of her own impending death? What story does the young man tell Nita when he shows her the photograph (pages 129–32), and what story does Nita tell him in return (pages 134–36)? What is the effect of this reciprocal response on Nita’s part? Compare this story’s ending with that of “Dimensions.”

6. Face
What is the web of familial and extrafamilial relations that determines the plot of this story? Discuss how the narrator and his friend Nancy create their own freedom and happiness within close range of a deeply unhappy ménage à trois. Who is the cause of the rupture that occurs on pages 155–57? Are Nancy’s attempts to mirror the flawed face of the narrator—first by painting, later by cutting—the clearest expressions of love he experiences in his lifetime? The narrator decides to settle in his childhood home because “in your life there are a few places, or maybe only the one place, where something happened, and then there are all the other places” (page 164). Why is this insight so profound? He goes on to suggest that the past is irreversible; do you agree or disagree?

7. Some Women
Who are the women referred to in the title? The story is narrated from a young girl’s
point of view. What does she understand—–and what does she not understand—–about what is going on in Mrs. Crozier’s house (page 188)? Who is the main actor in the story, the one who is trying hardest to manipulate others? What is the motive for this manipulation?

8. Child’s Play
The story opens with references to an event that is not yet explained. Why does Munro frame the story in this way? Explaining why she feels “persecuted” by Verna, Marlene says, “Only adults would be so stupid as to believe she had no power. A power, moreover, that was specifically directed at me” (page 204, 201). How does this idea of power ricochet through the story? Why does Marlene become an anthropologist, and why does she shun intimacy (pages 211, 2–12)? What does Charlene do to Marlene in asking her to go in search of Father Hofstrader? Compare this story with “Face,” with which it shares the idea that the action of a moment can be the determining event in a person’s life.

9. Wood
Why is Roy obsessed with cutting wood, an interest which is “private but not secret” (page 226)?  How has Lea’s illness affected their marriage? What is being repressed or unexpressed by Roy in this story? What is the transformation that takes place in Lea? What is the loss referred to at the bottom of page 245, and what does Roy mean when he retrieves from his mind the phrase, “the Deserted Forest” (page 246)?

10. Too Much Happiness
Outwardly this story diverges from the rest, but what concerns or questions connect it with others? What is the relationship between Sophia’s love for Maksim, her ideas about womanhood, and her joy in mathematical thought? Are they in conflict? How does Munro present female intellectual ambition and its frustrations, even its tragedy? What do you think is meant by Sophia’s last words, “too much happiness” (page 302)?

A.  E. Housman, The A Shropshire Lad; John McGahern, All Will Be Well; Ian McEwan, Atonement;; Lorrie Moore, A Gate at tThe Stairs; Vladimir Nabokov, “Signs and Symbols”; Flannery O’Connor, “A Good Man Iis Hard to Find”; Carol Shields, Unless; Ivan Turgenev, Fathers and Sons
Learn More About Too Much Happiness
print