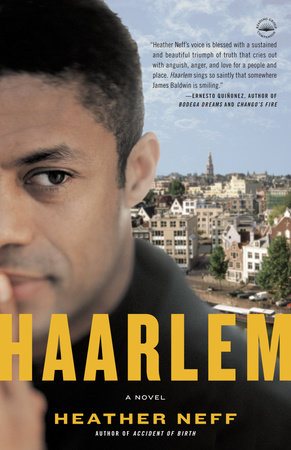 Haarlem examines a man’s redemption through his exploration of a new terrain and his discovery of new family members as he grapples with the nightmares of his past. The questions that follow are meant to enhance your discussion of the novel and spark conversation about Abel’s road to recovery.

1. What are the events in Abel’s life that have most influenced his ability to love another person?

2. What factors contributed to Abel’s decision to return to the Netherlands and try to find his mother?

3. How has Abel’s struggle with alcoholism affected his ability to interact with others?

4. Abel tells Serge that he doesn’t believe in “that invisible white man in the sky.” What are some of the other ways that Serge suggests that Abel might think of his Higher Power?

5. Upon arriving in Amsterdam, Abel is impressed by the clean, crime-free appearance of the city. How does this impression change over time?

6. How did Sophie come to live in Amsterdam, and how does her past continue to influence her life?

8. How does Abel change when he finds his mother?

9. How does learning about August Sebastian affect Abel? How do Abel’s feelings about his brother develop over the course of the novel?

10. What does Sophie teach Abel? Does Sophie learn anything from him?

11. The city of Amsterdam seems very different in many ways from New York. What new perspectives does Abel gain about his life as he spends time in Amsterdam?

12. How are issues of race and ethnicity depicted in Haarlem? How is Sophie’s understanding of herself as a Black woman different from that of African-Americans?

13. What do we learn of August Sebastian’s past? How does that information influence your perception of him?

14. Which Bible stories are referenced in Haarlem?

16. How does Abel’s recovery from alcoholism grow through his relationships with his mother? Sophie? Serge? His brother?

17. How important are Twelve-Step Programs in the recovery of the main characters in this novel?

18. How has Abel changed by the end of the novel? What choices has he made, and how will those choices affect the lives of those around him?

19. At the end of the novel Abel says, “Sometimes it hurts to think about where I came from. But now I know it’s the only way to understand how far I’ve come.” How is this true?

The Haunting of Hip Hop

Blow Your Mind
Back to Top