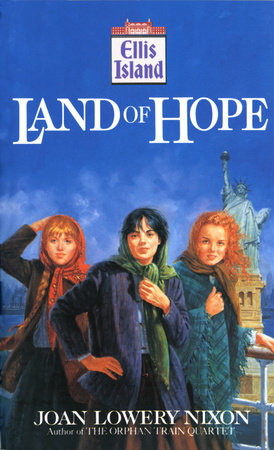 In The Ellis Island trilogy, readers meet Rebekah, Kristin, and Rose. Each girl left her homeland in 1902 to come to America. Traveling from Europe on the same ship, the girls become fast friends during the difficult three-week journey. When the ship sails past the Statue of Liberty into New York City Harbor, the steerage-class immigrants are ferried to Ellis Island to be questioned and examined. Then the girls part ways, realizing they may never see one another again. All three books offer readers insight into the difficult times for immigrants and the changing roles of women in the United States.

Rebekah Levinsky and her Jewish family flee Russia in the early 1900s to seek a better life in America. During their long sea journey, Rebekah befriends Kristin Swensen, a Swedish girl, and Rose Carney, who is Irish. The girls know that at Ellis Island they will separate to pursue their new lives, but their time together on the ship develops lasting bonds of friendship. Rebekah and her family settle in New York City, but instead of finding streets paved with gold, they slave seven days a week in a sweat shop. So begin their new lives, as Rebekah finds the resolve to conquer the odds against her and begins to study to become a teacher.

The following books are also discussed in this guide:
Land of Promise: When fifteen-year-old Rose Carney arrives in Chicago from her family farm in Ireland, she finds that life in America isn’t so easy, She’s been working to help pay for her mother’s and sisters’ passage; she’s been trying to deal with her father’s drinking problem; and then Rose becomes involved in Jane Addams’s campaign to clean up Chicago. How can Rose hold on to her American Dream?
Land of Dreams: As Kristin Swenson anxiously awaits her first glimpse of America, she is filled with a sense of the freedom that her new life promises. But she soon finds herself living on a farm in Minnesota where her parents and neighbors cling as closely as possible to the life they had known in Sweden.

Joan Lowery Nixon is the author of more than 90 books for young readers. The only four-time recipient of the Edgar Allan Poe Award for the Best Juvenile Mystery, Nixon knows what interests readers and delivers it to them without fail. A native Californian and a transplanted Texan, Nixon lives in Houston, where she is hard at work writing more books for her legions of fans.

This trilogy is set in the early part of the twentieth century. Share with students, or have them research, the situations in Russia, Sweden, and Ireland during the early 1900s. How did these conditions force members of each family to make the decision to come to America?
Discuss the procedures and rules for immigrants to enter the United States at the turn of the century. Have students research admittance procedures for immigrants today. How do they differ? Should this country have a new policy for immigrants? What do other countries do?

Responsibility
In Land of Promise, Rose promises to work hard so she can bring her ma and sisters to America. However, Rose finds it’s hard to keep promises. Have students look for all the promises that are made. Which promises in the novel are broken? Which ones are kept? Do the characters have good reasons for breaking their promises? In spite of many broken promises, why does Rose call America the land of promise?

Customs and Traditions
Some of the characters willingly embrace new customs, while others hold tightly to their old ways. For instance, in Land of Dreams, Kristin tries to embrace the customs of her new homeland and is surprised at her parents’ choice to cling to their old ways. Have students discuss the importance of customs and traditions. Should traditions change just because families move? Why do some people resist change more than others? Let students interview older family members about family traditions. How have the traditions changed?

Freedom
As the families in the Ellis Island series enter the United States, they see the Statue of Liberty. A poem by Emma Lazarus is inscribed on the pedestal of the monument: "Give me your tired, your poor,/Your huddled masses yearning to breathe free,/The wretched refuse of your teeming shore,/Send these, the homeless, tempest-tossed to me:/I lift my lamp beside the golden door." There are several symbols of freedom that appear on the statue:


The lit torch in her right hand acts as a beacon to the New World.
Her crown with seven spikes: Each spike stands for one of the seven seas and seven continents. The entire crown represents the light of liberty shining on all the seas and continents.
The date of the Declaration of Independence is inscribed on a tablet supported by her left arm.
A chain that stands for tyranny lies broken at her feet.

Ask students to explain why those things are symbols of freedom. Let students make or draw their own statue that could symbolize freedom today. Help them do this by first brainstorming the items that represent freedom in this country today. Ask how the meaning of freedom has changed since 1884. Let students write their own poem or find a poem that they feel is fitting for their statue.

Immigrants
Between 1900 and 1910, over 6 million immigrants were allowed entry into the United States. Consequently, many people today are descendants of those immigrants. Have your students interview immigrants in their families or a relative who knows stories about family members. Questions for them to ask include: Did the relative enter through Ellis Island? What keepsakes were brought on the journey? What hardships did the relative endure? What were the biggest surprises about life in the United States?

Living in Today’s Society
In all three books, views on men’s and women’s roles were clear. Discuss how and why those views have changed. What attitudes are held today?

Rebekah’s mother asks her, "How can you be so selfish that you’d ask your parents to spend money on an education for you? In a few years you’ll marry and raise children, and an education would be nothing but a useless waste of money." (Land of Hope, p. 117)

Prejudice
The trip to America was terrible for poor immigrants. Kept in the lower part of the ship, immigrants dealt with unsanitary conditions, an unbearable stench, minimal food, and overcrowded conditions. Share information about the passage with students. Discuss why ships bringing people to a land where all people are "created equal" treated first-class, second-class, and steerage class passengers so differently.

Writing
After students have finished reading one or more of the books, let them work collaboratively to create a newspaper for that time. Each paper should contain the following: a masthead, a headline story about a major event, local news, a fun section that might include a crossword puzzle or word find or cartoon strip, a birth or obituary section (if possible), travel news, and world news (if possible). All information for the newspaper should come from the novel the students read.

Geography
Have students identify on a map where Rebekah (Land of Hope), Rose (Land of Promise), and Kristin (Land of Dreams) lived before they began their voyage to America. Have them trace the routes the girls took to arrive at the ship, as well as the voyage of the ship. Have them locate the area where each girl settled in America and trace the route they would have followed to get there. Have students create a map that shows the entire trip for each character. Students should identify the continents, countries, states, and major bodies of water the characters encounter. Students can also practice locating places through latitude and longitude.


From Civil Rights to Women’s Rights
In America, Rebekah, Rose, and Kristin are surprised that their parents still expect to arrange their daughters’ marriages, that most colleges are only for men, and that women cannot vote. Slowly, women’s rights were being advocated. Have students read about the women’s rights movement and compare it to the Civil Rights movement. Why would a country founded upon equality need such movements? Are all people equal today? If not, what keeps the inequality?
As in the case of all historical novels, real people, places, and events play a role in these novels. Direct students to the library to research one or more of the following topics:

Current Events
Divide the class into two large groups, and then divide each large group into smaller groups. Ask each small group to research one of the following topics and prepare a method for sharing the information with their larger group and then the entire class. Vehicles for sharing information include charts, graphs, collages, radio broadcasts, news reports, essays, and poetry.

Joan Lowery Nixon brings not only characters from far away to the United States in the Ellis Island series, she also brings their language. Use any of the following activities with students.


The names of the characters–Rebekah Levinsky, Kristin Swensen, and Rose Carney–help readers understand that these characters bring a heritage with them to their new home. Ask students why the author didn’t call the girl from Russia Rose Carney and the one from Ireland Rebekah Levinsky. What makes a name "sound" Irish or Russian or Swedish or African or Japanese or American? Ask students to look through the books for other names that reflect a country of origin.
Rebekah worries about being a gantser knaker or a know-it-all (Land of Hope, p. 21). Rose uses the word "Da" for Father and wants to play "draughts" which is the same game called checkers in the United States (Land of Promise, p. 82). These are two examples of how the author uses language from other countries to help create an authentic plot and setting. Have students locate other examples. Let students brainstorm words/phrases they hear today that are more commonly said in other countries.

A "little jewel. . . A real, true-life story that could have happened to any reader’s great-grandparents."
–VOYA

"An absorbing quick read that offers an appreciation for the struggles faced by immigrants at the start of this century."
–School Library Journal

"Nixon’s careful rendering of life for immigrants in the early 1900s is realistically harsh yet hopeful, and teenagers will absorb a strong sense of the times as they read Rebekah’s engrossing story."
–Booklist

I Am the Wallpaper

Keep Me in Your Heart

The Summer My Life Began

Children of the River

Mismatch
Back to Top