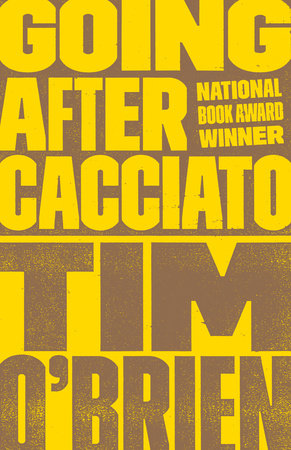 Going After Cacciato captures the peculiar mixture of horror and hallucination that marked this strangest of wars. In a blend of reality and fantasy, this novel tells the story of a young soldier who one day lays down his rifle and sets off on a quixotic journey from the jungles of Indochina to the streets of Paris. In its memorable evocation of men both fleeing from and meeting the demands of battle, Going After Cacciato stands as much more than just a great war novel. Ultimately, it is about the forces of fear and heroism that do battle in the hearts of us all.

1. Why do you think Cacciato journeys to Paris? Why not Brussels? Or Rome?

2. Why would Cacciato have planted a smoke grenade booby trap? Does it serve any practical purpose? Why do you think O’Brien describes the men’s intensely visceral reactions to the smoke grenade in such detail? What insights does the event provide into the nature of marching through mined territory?

3. Berlin describes the story of Cacciato’s flight as "a truly awesome notion. Not a dream, an idea. An idea to develop, to tinker with and build and sustain, to draw out as an artist draws out his visions." How does he manage to build and sustain this "notion"? Are there certain rules governing the construction of Berlin’s fantasy? How does it differ from an ordinary daydream?

4. Going After Cacciato could be said to take place all in the course of one night of extended sentry duty on an observation post on the South China Sea, during which Paul Berlin remembers recent combat experiences and also imagines a flight to Paris. Why do you think O’Brien structured the novel so as to blur the distinctions between the three realities (the observation post, the combat memories, and the flight to Paris)? At what point were you aware of these three separate stories? How do they each intersect and influence one another? At what moments do they most strikingly bleed into one another?

5. What kind of relationship does Paul have with his father? What impact does it have on his behavior during his tour of duty? What significance do his childhood memories of playing Little Bear and Big Bear in Indian Guides have for him in Vietnam?

6. We are told on the very first page of the novel which soldiers die and of what cause. Why wouldn’t O’Brien want their deaths to be a surprise? In contrast, why does O’Brien allow Cacciato’s fate to remain a mystery until the end of the novel? How does O’Brien use suspense as a novelistic technique?

7. Is Sarkin Aung Wan a construction of Berlin’s imagination? If so, what does her character tell us about Berlin? Why does their relationship remain chaste for so long?

8. In a later novel entitled The Things They Carried, O’Brien makes numerous observations about the nature of a true war story. "Often in a true war story there is not even a point. . . . You can tell a true war story by the way it never seems to end. . . . It’s safe to say in a true war story nothing is ever absolutely true. . . . In any war story, especially a true one, it’s difficult to separate what happened from what seemed to happen." How is Going After Cacciato an elaboration of these ideas? Which parts of the novel represent "true war stories"?

9. What does the Viet Cong Major Li Van Hgoc mean when he says, "the land is your enemy"? How does he confirm Berlin’s own suspicions about the country’s animosity toward the U.S. troops?

10. If the journey to Paris is in Berlin’s imagination, why does he get beaten by the monks in Mandalay? Or arrested in Iran? Why does Sarkin Aung Wan leave him? Why must his imagined journey after Cacciato be full of so much emotional and physical pain?

11. Is there any significance to the fact that the story keeps returning to one particular night of watch duty at an observation post on the South China Sea? Why does Berlin weave the tale of Cacciato’s flight on this particular night?

12. Does the debate with Captain Fahyi Rhallon over desertion shed any light on the legitimacy of the squad’s current pursuit of Cacciato? Do you think the squad is deserting from the war, or executing a military mission? How does Berlin manage to keep the distinctions blurry for the entire length of the novel?

13. Berlin thinks, "You could run, but you couldn’t outrun the consequences of running. Not even in imagination." Why can’t Berlin imagine deserting without letting the consequences sneak into his fantasies? What role does guilt play in the construction of Berlin’s fantasy?

14. In chapter 42, Berlin muses that this war is "a war like any war. No new messages. Stories that began and ended without transition. No developing drama or tension or direction. No order." How does Going After Cacciato reflect these notions? How does it contradict them?

15. How accurate is Berlin’s perception that "peace was shy. That was one lesson: Peace never bragged. If you didn’t look for it, it wasn’t there"?

A native of Worthington, Minnesota, Tim O’Brien graduated in 1968 from Macalester College in St. Paul. He served as a foot soldier in Vietnam from 1969 to 1970, after which he pursued graduate studies in government at Harvard University and later he worked as a national affairs reporter for the Washington Post. He now lives in Massachusetts. Other books by Tim O’Brien include If I Die in a Combat Zone: Box Me Up and Ship Me Home, The Things They Carried, Northern Lights, The Nuclear Age, and In the Lake of the Woods. Going After Cacciato won the National Book Award in 1979. The Things They Carried was a finalist for the Pulitzer Prize and the National Book Critics Circle Award. In the Lake of the Woods won the James Fenimore Cooper Prize from the society of American Historians and was selected as the best novel of 1994 by Time Magazine. His latest novel, Tomcat in Love (1998), was a New York Times bestseller.
Learn More About Going After Cacciato
print

What Is the What

Waiting for the Barbarians

Life and Times of Michael K

When the Elephants Dance
Back to Top