If I Die in a Combat Zone Reader’s Guide 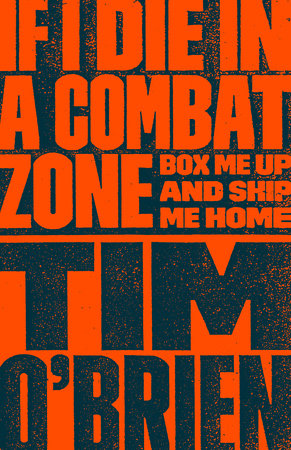 If I Die in a Combat Zone Reader’s Guide

print
If I Die in a Combat Zone Reader’s Guide

Tim O’Brien’s searing, intensely personal memoir of his year as a foot soldier in Vietnam takes us with him to experience combat from behind an infantryman’s rifle, to walk the minefields of My Lai, to crawl into the ghostly tunnels, and to explore the ambiguities of the manhood and morality in a war gone terribly wrong.

1. O’Brien writes of the Vietnam War, "Things happened, things came to an end. There was no sense of developing drama." What does he mean by that? Do his stories support or contradict his assertion? How does O’Brien manage to fashion a book out of events that have no developing drama?

2. If I Die in a Combat Zone consists of 23 short chapters, often chronologically discontinuous and out of order. Why do you think O’Brien chose to structure his memoir in this way? How did the structure affect your reading of the memoir? Did it frustrate you, or did the lack of continuous narrative give you insight into his experience?

3. How does this account of the war differ from other novels and films of Vietnam you may have read or seen?

4. What light does If I Die in a Combat Zone shed on current U.S. military engagements? Are the same issues of courage, justice, and patriotism at stake in the Balkans and the Middle East? How do these conflicts differ from the Vietnam War, with regard to the U.S. foot soldier?

5. Do you think that Tim O’Brien is a reliable narrator?

6. Throughout his entire training and tour of duty, O’Brien remains engaged in the essential question of whether he should continue to fight in the war, or desert. Which arguments did you find most compelling on either side? Are they still relevant today? In the end, he finishes his tour of duty without ever deserting. What prevents him from running away? Do you find his behavior heroic or cowardly, or both?

7. How does the army address O’Brien’s misgivings about the war they are fighting? Between the Battalion Commander, the Chaplain, the Drill Sergeant, and Captain Johansen, are any of his concerns treated seriously? How do you think dissent within the ranks should be treated? How did Plato feel about it?

8. Chapter 10, "The Man at the Well," is less than two pages long, and yet it manages to be one of the most powerful chapters in the book. How is that so? How does it strike at the heart of what it means to be in a foreign war? Can the chapter be viewed as allegorical?

9. Why is Erik’s friendship so important to O’Brien? What role does it play in his life? How is he able to maintain a close relationship with Erik throughout the war, despite their differing deployments?

11. How does O’Brien define courage? How do his actions fall short of his ideal? Why do you think it is so important to him to be courageous? In light of his frank descriptions of his own lack of valor, how do you imagine you would behave in similar combat situations? Has this book changed your notions of bravery?

12. Major Callicles imagines himself to be a brave man from the old school of soldiering. In what ways is he courageous, and in what ways does he fail O’Brien’s measure of valor? What does Plato mean when he writes, "courage is a certain kind of persevering"?

13. In Chapter 18, "The Lagoon," O’Brien describes how the war has transformed an Eden-like sea coast into a modern combat zone. In what ways does the lagoon retain its beauty? Similarly, where does O’Brien find beauty in Vietnam in general?

14. In the final chapter, as O’Brien’s flight home takes off, he writes, "There is no joy in leaving." What is it that robs his departure of the much anticipated joy he expected? How is his encounter with the stewardess sadly prescient of what his life back home will be like?

15. Has your opinion of either the Vietnam veterans or those who dodged the draft changed in the course of your reading?

A native of Worthington, Minnesota, Tim O’Brien graduated in 1968 from Macalester College in St. Paul. He served as a foot soldier in Vietnam from 1969 to 1970, after which he pursued graduate studies in government at Harvard University and later he worked as a national affairs reporter for the Washington Post. He now lives in Massachusetts.

Other books by Tim O’Brien include If I Die in a Combat Zone: Box Me Up and Ship Me Home, The Things They Carried, Northern Lights, The Nuclear Age, and In the Lake of the Woods. Going After Cacciato won the National Book Award in 1979. The Things They Carried was a finalist for the Pulitzer Prize and the National Book Critics Circle Award. In the Lake of the Woods won the James Fenimore Cooper Prize from the society of American Historians and was selected as the best novel of 1994 by Time Magazine. His latest novel, Tomcat in Love (1998), was a New York Times bestseller.
Learn More About If I Die in a Combat Zone
print

It Doesn’t Take a Hero

Given Up for Dead

Helmet for My Pillow

I Could Never Be So Lucky Again

Stronger
Back to Top