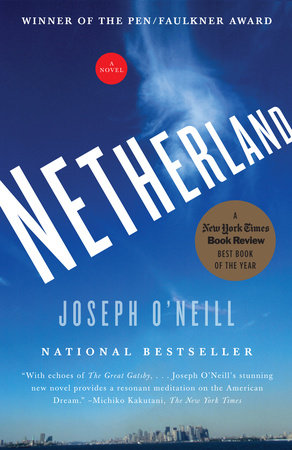 “Stunning . . . with echoes of The Great Gatsby, Fitzgerald’s masterpiece . . . a resonant meditation on the American Dream.”
—Michiko Kakutani, The New York Times

The introduction, questions, and suggestions for further reading that follow are designed to enliven your group’s discussion of Joseph O’Neill’s Netherland.

Netherland is the mesmerizing story of a European man living in New York City after 9/11, with two troubled loves—that for his wife, and that for his adopted country. Told in a lyrical voice, the story of his journey involves an immersion in the cricket-playing subculture of the city, a tragic friendship with a Trinidadian immigrant, and a darkening understanding of the great American narrative. It is a story of heritage and home, of sports and work, of friendship and love, and it ultimately offers universal truths about the search for meaning in life and the hope for renewal.

1. Describe the structure of Netherland. Why does the author open with Hans moving to New York City and then quickly jump into the future with Chuck’s death and then jump back? Do you think these flashbacks and foward leaps relate to the narrative arc of the story? Is this simply how we tell stories? When you tell a story do you tell it chronologically? Why?

2. Childhood often slips into the story-that of both Hans and Chuck. Early on in the novel, Hans mentions that he doesn’t connect to himself as a child ("I, however, seem given to self-estrangement" [p. 49]), then proceeds to produce numerous memories of his childhood and of his mother. How is this reconnecting with his heritage and his past important to the story? How is Chuck often the catalyst for these memories?

3. Chuck is more connected to his heritage than Hans. He socializes with others from the West Indies; he’s married to a woman from his birth country, etc. How do flashbacks to his childhood differ from Hans’s and how do they affect the novel as a whole?

4. How does nostalgia play into Netherland? Who is nostalgic and for what? Why does O’Neill open the novel with someone being nostalgic for New York City?

5. Discuss the title. What does "netherland" mean and what do you think it refers to?

6. Chuck’s motto is "think fantastic." How does this both help and hinder him? Can you create an appropriate motto for Hans? How about for yourself?

7. What does the United States represent for Hans and Chuck? How are their relationships with their new country similar, and also polar opposites?

8. How are both Han’s and Chuck’s experiences typical of the American dream of immigrant stories? Compare Netherland to other stories of the immigrant experience (The Joy Luck Club, The House on Mango Street, House of Sand and Fog) or to what you imagine immigrating to a new country to be like.

10. Describe the narrator’s voice. Do you trust and like Hans as a narrator? Do you sympathize with him and understand his motives? Do you identify with him?

11. Describe the Chelsea Hotel when Hans lives there. How is it a character in the novel? How are the various inhabitants and the oddness of the place appealing and comforting to Hans?

13. Discuss the theme of male friendship in the novel and its connection to sports. Early in the novel, Hans describes playing cricket with Chuck: "The rest of our lives—jobs, children, wives, worries—peeled away, leaving only this fateful sporting fruit [p. 48]." While Hans’s friendship with Chuck goes beyond cricket, the sport is what initially brings the two men together. Why do you think cricket is so important to Hans? How does his friendship with Chuck change him?

14. Netherland is also the story of a marriage. Why is Hans and Rachel’s marriage falling apart? What brings them together again in the end?

15. Discuss the theme of betrayal and forgiveness in Netherland. How do both Rachel and Hans betray each other and why? What about Chuck? Do the characters ever lead themselves astray and betray themselves? Does America betray both Chuck and Hans in the end?

Joseph O’Neill was born in Cork, Ireland, in 1964 and grew up in Mozambique, South Africa, Iran, Turkey, and Holland. His previous works include the novels This Is the Life and The Breezes and the nonfiction book Blood-Dark Track, a family history centered on the mysterious imprisonment of both his grandfathers during World War II, which was a New York Times Notable Book. He writes regularly for The Atlantic Monthly. He lives with his family in New York City.