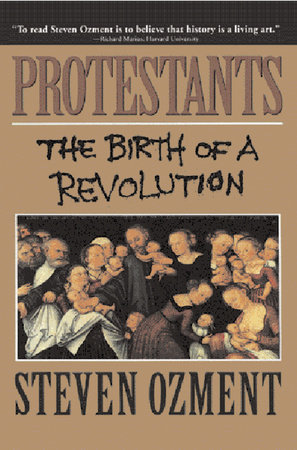 The Birth of a Revolution

Who were the first men and women who abandoned the Church of Rome and became the world’s first Protestants? Harvard historian Steven Ozment does not present us with the remote, dusty figures of history, but rather with the shoemakers and housewives, students and politicians who were among the first followers of Martin Luther. Using pamphlets, diaries, letters, and other primary soruces, Ozment examines the origins of the Reformation and the nature of Protestantism. Rather than seeing the Reformation as the progenitor of German absolutism, as do many scholars of the period, Ozment sees in Protestantism the historic assertion of key Western values–social reform, individual religious conviction, hard work, and the rejection of corruption, hypocrisy, and empty ritual.

Steven Ozment is McLean Professor of Ancient and Modern History at Harvard University. His nine books include The Age of Reform, winner of the Schaff History Prize and a finalist for the National Book Award, and The Bürgermeister’s Daughter. He… More about Steven Ozment