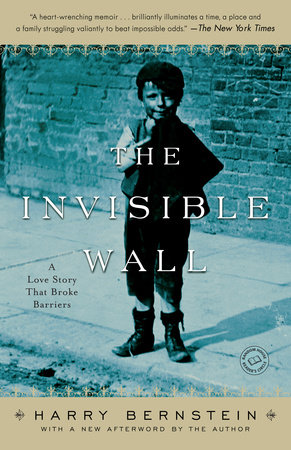 1. How would you describe The Invisible Wall? A social history exposing religious prejudice? A story of star-crossed lovers? A young boy’s coming of age?

2. Harry’s sister Rose dreams of one day having a parlor and a piano; why does she consider her mother’s faded fruit shop to be a betrayal?

3. If you were in young Harry’s position, would you have kept Lily’s love affair a secret? What was at stake for Harry in maintaining his silence?

4. Despite all that divides them, there is a level of everyday mutual dependence linking the Jews and Christians of Bernstein’s street– gaps in the invisible wall, so to speak. What examples of this mutual dependence can you think of, and do they work to dismantle the wall or to reinforce it?

5. Harry’s mother is a remarkable woman. Her selﬂess acts sustain the impoverished family, and yet she disowns her daughter for marrying a Christian boy. Discuss this seeming contradiction in her character, and how she ultimately reconciles it within her own heart.

6. In the accompanying interview, Harry Bernstein states that “wars always bring people face-to-face with reality, causing false barriers to disappear.” Do you agree or disagree?

7. By encouraging Lily to improve herself through education, is her mother sowing the seeds that ultimately lead to Lily’s dissatisfaction with the boundaries of Judaism and her involvement with her Christian neighbor, Arthur?

8. Why do you think Lily’s father prevents her from going to the grammar school after she’s won the scholarship?

9. What does America represent to the Bernstein family?

10. Fatherhood and forgiveness are important themes in Bernstein’s story. Do you think Bernstein has forgiven his father? Do you think his father deserves to be forgiven? On the other hand, what do you think of the rabbi’s son, Max? Does he betray his father and his faith by going to Russia to ﬁght in the revolution?

11. Have you ever experienced living in a divided community, like the street on which Harry lived as a child? Reﬂect on the religious, class, or racial separations you may encounter in today’s society, both outwardly and self-imposed.

12. Harry Bernstein published his ﬁrst memoir in his nineties; what are your own dreams, and how does Bernstein’s story inspire you to reach for them?

Young Heroes of the Soviet Union

The Coalwood Way
Back to Top