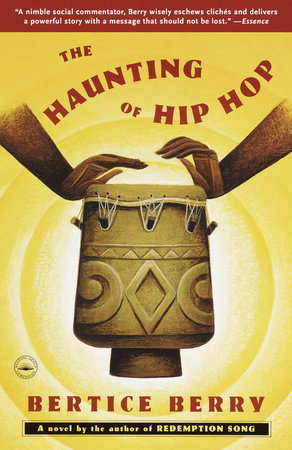 Bertice Berry speaks to many generations in The Haunting of Hip Hop. Weaving together the lives of the Ngozi, who was violently robbed of his ability to communicate, and Freedom, the king of chart-topping sounds, Berry raises provocative questions about the ageless importance of dialogue. We hope that the following topics will help your reading group give voice to new ideas and enjoy a spirited discussion.

Popular comedian and inspirational speaker Bertice Berry follows her very successful and Blackboard bestselling debut novel, REDEMPTION SONG, with a modern cautionary tale about the importance of honoring the past. It is a mesmerizing book that is sure to raise eyebrows about the impact–good and bad, of rap culture.

1. Ngozi embodies incredible strength of character: determination, integrity, a loving heart, responsibility, respect for his family. Who are the Ngozis (male and female) in your life and community?

2. Although he named himself Freedom, Harry Hudson faces numerous obstacles, even when he is a little boy. It’s only through the spirit world that he can truly set himself free. What constraints are imposed by the modern world? Can ancestors really liberate their descendants?

3. Do you share Ava’s opinion of Chucky Campbell? Did he sell out?

4. The heart of the novel deals with desecration of the sacred drum: “The beat, the rhythm, the words of hip hop music rarely spoke the truth of the drum,” (chapter 30). What is your opinion of hip-hop culture? Do raw rap lyrics contribute to violence, or do they expose a painful way of life that would otherwise go unaddressed?

5. What does the drum represent to you? How can you honor it in your own life?

7. Describe the hypnotic music that Ava hears on the night of Freedom’s death. If the book had come with a recording, what do you suppose this music would have sounded like?

8. From the day Ngozi is born, his mother has many visions about his future. She tells him, “Your life here will be short, but your task is great” (Prologue), and he carries this knowledge with him into the “beast” that entombs him during the Middle Passage. In modern society, what does it take to give a child that same sense of purpose and self-worth?

9. Ngozi has no frame of reference for the kind of cruelty he sees in America, perceiving his situation as a battle of the spirits: “Once their hatred matched that of their captor, they would have forgotten the proverb: The only weapon that can do battle with hatred is the weapon of love and peace (page 41). . . . Ngozi was certain that the blood of the lost would be on the heads of those traitors for generations to come (page 51).” How does this philosophy relate to the daily battles in your life, and the wars waging around the world?

10. The grandmothers represent a bridge between the novel’s two main male characters, Ngozi and Freedom. How do your aunts, mothers, and grandmothers provide a link to your ancestry? How do they interact with the men in your family?

11. The brownstone sits at the corner of West 138th Street and Harriet Tubman Terrace, in a “gentrified” stretch of Harlem. What is the significance of the brownstone’s location? Why do you suppose Bertice Berry included a southern connection for so many of the characters?

12. Why did Freedom have to join the spirit world? What effect does this have on the tone of the book’s final chapters?

13. The brownstone ghosts cope with a variety of unfulfilled quests. What keeps the spirits from finding peace? Which quests were you most able to identify with?

14. Are you skeptical about the existence of a spirit world, or do you feel a connection to it? Discuss any dreams, intuitive thoughts, or visions that have made a difference in your life.

15. The novel ends on a note of triumph and unity. What can be done to make this vision, Ngozi’s vision, a reality?

Bertice Berry is a comedian and inspirational speaker and holds a Ph.D. in sociology. She has about 250 speaking engagements per year. She is the author of the novel REDEMPTION SONG and four works of nonfiction. She lives in Southern California where she is raising her sister’s children.
Learn More About The Haunting of Hip Hop
print

The Hearts of Men

The Hand I Fan With

The Queen of Harlem
Back to Top