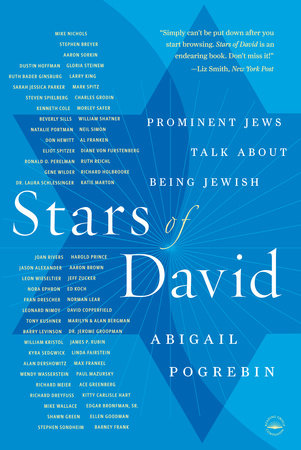 1. What do you think Abigail Pogrebin’s intention was in writing this book? Did she succeed?

2. Do you think an understanding of Judaism is needed to appreciate the book? In what ways does Pogrebin make it accessible to everyone?

3. Which was your favorite interview, and why? Your least favorite?

4. Many of the people profiled changed their names–everyone from Beverly Sills to Natalie Portman. Were you surprised to find that name-changing is still happening today? Why do you think that is?

5. Several of the comedians were reluctant to acknowledge Jews’ contributions to humor as being greater than many ethnic groups, while others were obviously proud to pronounce it as fact. What’s your take on the Jews’ role in comedy?

6. It’s no surprise that anti-Semitism comes up throughout the book. Have you ever experienced or witnessed anything like what you read about? How did/would you respond?

7. On page 265, Richard Meier says “If you believe you are a Jew, then you are one,” but just six pages later Ruth Reichl states that “it’s others’ definition of us that makes us Jews.” Which assessment do you favor–or do you have your own theory on what makes a Jew?

8. Tikkun Olam–repairing the world through social action–is mentioned in several of the interviews. Of all the people in the book, who do you believe best exemplifies this concept? How?

9. The majority of the interviewees are either intermarried themselves, or their parents are. Did this proportion surprise you? Were there any interviewees who you would consider to be not Jewish?

10. What did you think of the various approaches to raising Jewish children? Whose style seemed closest to your own, or to the way you were raised?

11. There was also a broad range of feelings about Israel–everything from embarrassment (Ruth Reichl) to unwavering support (Joan Rivers). Who did you identify with most closely, and why?

12. For as much as this is a book about being Jewish, the majority of the interviewees followed few of the actual laws of observance–even though they identified themselves very strongly as Jews. Do you think this is a uniquely Jewish trait, or is it something you’d see with any religion?

13. Several of the interviewees–Ruth Bader Ginsburg, Ronald O. Perelman, Jason Alexander, and others–mentioned a discomfort with the role of women in Judaism. How do you feel about it?

14. In many ways, Pogrebin’s interview with Leon Wieseltier is the heart of the book–some of his pronouncements are especially provocative, and suggest a different way of reading the others’ stories. In particular, “he derides a kind of Jewish identity that might be described as Judaism Lite–an identity tied to ethnicity, not education” (page 156). Do you agree or disagree with most of what he said? Did his assertions make you re-think your reading of anyone else’s interviews?

15. Contrast Wieseltier’s education-insistent approach to Judaism with Max Frankel’s assertion that “education: learning to question” is half of what’s making Jews turn away from religion (page 235).

16. In her epilogue, Pogrebin tells us that, as a result of conducting the interviews and writing the book, she has become more religious. Why do you think that is? Do you feel any different, now that you’ve read the book?
Learn More About Stars of David
print

Her Face In The Mirror

The Complete Idiot’s Guide to the Talmud
Aaron Parry

Changing the World from the Inside Out
David Jaffe

The Church and the Second Sex
Mary Daly

God Is a Verb
David Cooper

Burn It Down!
Breanne Fahs

The Coming of Lilith
Judith Plaskow

The Spiral Staircase
Karen Armstrong
Back to Top