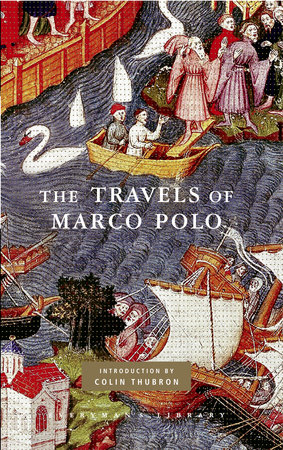 1. Though many of his contemporaries doubted the veracity of his story, Marco Polo’s account of his travels was widely read and discussed in medieval times, and went on to become the most influential and popular travel narrative ever written. What do you think accounts for its popularity and historical importance?

3. What qualities made Marco Polo an ideal traveler and narrator?

4. What do you think accounted for Marco Polo’s success as an advisor, administrator, and diplomat in the government of Kublai Khan? What can you discern about Marco Polo the man from his writings?

5. What sort of impression did Kublai Khan make on Marco Polo? How does Marco Polo describe him?

6. Some of the marvels Marco Polo encountered in his travels through the East were completely unknown in the Europe of his time. These include paper money, the Imperial postal system, crocodiles, and coconuts. What other interesting and peculiar phenomena did Marco Polo discover during his travels?

7. Discuss the general features of Chinese society and culture as described by Marco Polo. How did this culture compare to the Europe of Marco Polo’s day? To other cultures and civilizations that you are familiar with?

Learn More About The Travels of Marco Polo
print

Rivers of Gold
Back to Top