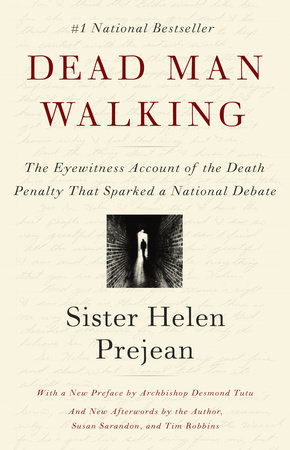 The questions, discussion topics, and author biography that follow are intended to enhance your group’s reading of Sister Helen Prejean’s Dead Man Walking. We hope they will give you a number of interesting angles from which to consider this gripping story of two condemned men and the courageous nun who became their spiritual adviser.

One day in 1982 the Prison Coalition of Louisiana asked Sister Helen Prejean, a Catholic nun who lived and worked among the poor of New Orleans, to correspond with a death-row inmate– a convicted killer of two teenagers. As she got to know Patrick Sonnier and to measure his fear, remorse, and humanity, her aversion to capital punishment– an integral part of her faith and philosophy– developed into a conviction that it can, and must, be abolished. In Dead Man Walking, the chronicle of her personal experiences with death-row inmates, Prejean introduces us not only to the prisoners themselves but to the grieving, furious families of their victims; to the people who administer the sentence of death; to the inefficient legal system; and to the expedient, occasionally capricious political choices that determine whether a prisoner will live or die. Dead Man Walking is an extraordinary and thought-provoking book that makes us reexamine some of our most fundamental beliefs.

1. Sister Helen Prejean looks back on the life and career of her father– a good man who helped the black people in his segregated community– and reflects that "systems inflict pain and hardship in people’s lives and…being kind in an unjust system is not enough" [p. 7]. Do you find her judgment to be true?

2. Sister Helen believes that a nun, as a servant of God, should serve the poor, and she sees her political activism as a way of serving the poor. Does Sister Helen fit your own conception of a nun? While reading the book, did you find yourself looking upon Sister Helen as a heroine?

3. Lloyd Leblanc asks Sister Helen, "How can you present Elmo Patrick Sonnier’s side like this without ever having come to visit with me and my wife or the Bourques to hear our side?" [p. 64] Why do you think it never occurred to Sister Helen to do this? When she eventually becomes friendly with the victims’ families, how, if at all, does it affect her ideas about the killers?

4. Each of the prisoners– Pat, Eddie, and Robert– expresses remorse. Is their remorse genuine? How do their feelings about their crimes appear to change during the course of their imprisonment? In what way does Pat’s death affect Eddie? Do you believe that, by the time of his death, Robert has come to terms with himself and his crime?

5. Sister Helen accuses Edwin Edwards of condoning the death penalty so as not to risk his political career. Do you believe that Edwards is doing his job as governor by carrying out the will of the people, or should he act upon his own convictions? Robert says, "This whole death penalty ain’t nothing but politics" [p. 162]. What does he mean by this, and do you think he has a point?

6. A greatly disproportionate number of the prisoners executed are black. Do you think the South’s history contributed to this inequity, and, if so, how? How does that history continue to mold the lives of black and white citizens? How has it led to hellish environments like St. Thomas?

7. "Look how shamefully secret this whole thing is," says the lawyer Millard Farmer. "If most people in Louisiana would see what the state did tonight, they would throw up" [p. 94]. Both Farmer and Sister Helen believe that performing executions in public would turn opinion against capital punishment. Do you agree with them? Or do you think, like many, that witnessing executions would simply desensitize citizens about death?

8. Great pains are taken to prevent Death Row inmates from committing suicide. Do these precautions make sense to you?

9. Sister Helen quotes Albert Camus on the death penalty: "To assert…that a man must be absolutely cut off from society because he is absolutely evil amounts to saying that society is absolutely good, and no one in his right mind will believe this today" [p. 22]. Do you find this a persuasive argument? What about Camus’s next assertion, that the death penalty is as evil as first degree murder because it is premeditated? Does that seem a reasonable comparison to you?

10. Sister Helen believes that "to claim to be apolitical or neutral in the face of…injustices would be, in actuality, to uphold the status quo– a very political position to take, and on the side of the oppressors" [p. 5-6]. Do you agree with this assessment? Do you believe that there is in fact any such thing in today’s world as being truly apolitical or above politics?

11. Sister Helen often speaks of "government" as though it were entirely separate and dissociated from the people themselves. Do you feel this is an accurate view of government, or do you feel that the government we have does reflect, at least in large part, the opinions of its citizens? If so, do you think that it is the government’s job to educate and lead public opinion or to follow it?

12. The people responsible for carrying out executions rationalize their actions by saying that they are just doing their jobs. Are men like Phelps, Rabelais, and Blackburn justified in believing that they are doing the correct thing? What does the fact of the executioner’s legal anonymity indicate to you? Is Sister Helen correct to compare this complicity in the execution of criminals with the obedience shown by the servants of the Nazi regime in carrying out their terrible murders?

13. Sister Helen asks Phelps his opinions on some questions that have been bothering her. "Aren’t there, I argue, some rights fundamental to human beings– such as the right not to be tortured or killed– that everyone, including governments, must respect? Doesn’t the moral foundation of a society erode if its government is allowed to treat these fundamental, nonnegotiable rights as some sort of privilege, which they take on themselves to dispense for good behavior or withdraw for bad behavior?" [p. 103] What are your opinions on these issues? Do you agree with Sister Helen that, according to Amnesty International’s definition of torture, Pat Sonnier was tortured?

14. Sister Helen describes the legal system as "a system of gates that shut like one-way turnstiles, and you can’t go back once you’ve come out" [p. 45]. The long appeals process would seem to ensure a fair trial for all, but in actuality the prisoner’s success within it depends upon how good a lawyer he can afford to hire. Has the experience of reading Dead Man Walking changed your views of the American legal system, and, if so, in what way?

15. How do the lives, expectations, and attitudes of the members of Survive differ from those of the members of the group founded by the Harveys? What do these differences tell us about the lives of black Louisianans as opposed to white ones?

16. If you have seen the film of Dead Man Walking, how did its approach to the issue of capital punishment differ from that of the book? Did you feel that the filmmaker was taking sides on the issue, or did he treat both sides in a balanced way?

Helen Prejean, C.S.J., was born and brought up in Baton Rouge, and has lived in Louisiana all her life. A member of the Sisters of St. Joseph of Medaille, she has long been involved in community work among the poor. Her contact with a man on Death Row in Angola State Prison led her to become an outspoken activist both against capital punishment and as an advocate for the families of murder victims. Prejean has lectured extensively on the subject of capital punishment and has appeared on ABC World News Tonight, 60 Minutes, National Public Radio, The Today Show, and an NBC special series on the death penalty. Her articles have appeared in a number of publications, including the San Francisco Chronicle and the Baltimore Sun.
Learn More About Dead Man Walking
print

Waiting for an Echo

Dead Men Do Tell Tales
Back to Top