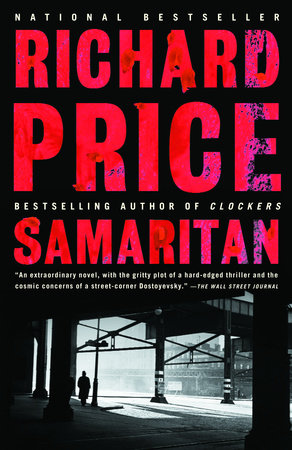 “An extraordinary novel, with the gritty plot of a hard-edged thriller and the cosmic concerns of a street-corner Dostoyevsky.” —The Wall Street Journal

The introduction, discussion questions, suggested reading list, and author biography that follow are intended to enhance your group’s reading of Richard Price’s Samaritan which, like Clockers and Freedomland, is set in the troubled urban community of Dempsy, New Jersey. We hope they will give you a number of useful angles from which to consider this gripping novel.

After his lucrative television writing career comes to an abrupt end, ex-high school teacher Ray Mitchell returns to the New Jersey city of his birth—to rethink his life, reconnect with his teenage daughter, and to spread the wealth on the housing project that reared him. He begins teaching again, embarks on an affair with a married woman from the old neighborhood, and becomes a mentor to a former student recently released from jail.

Then, disaster: he is found beaten nearly to death in his own apartment. He knows who did it, but he’s not talking, and he refuses to press charges. It is up to Detective Nerese Ammons—a childhood acquaintance from the projects—to get Ray to tell her what happened.

As she investigates the people in Ray’s life most likely to do him harm and listens to his fevered ramblings about their shared past as he slips in and out of consciousness, Nerese is charged not only with uncovering the perpetrator of this assault but with understanding what kind of victim is more afraid of the truth than of his potential murderer.

The Washington Post Book World has hailed Richard Price as having “the best equipment a novelist can have—that combination of muscularity, insight and compassion we might call heart.” Samaritan is an electrifying story of crime and punishment, of character and place, of children and their keepers—a novel of literary suspense that explores what happens when, caught up in the drama of one’s own generosity, too little is given, too little is understood, and the results threaten to prove both tragic and deadly.

1. The novel begins as Ray tells his daughter Ruby a story from his boyhood in the Hopewell Houses. What is the significance of such stories for Ray? How good a storyteller is he? What is the effect of framing the plot within the story of Tweetie’s injury and his attempt to help her?

2. Chapter 5 gives an account of the information Bobby Sugar has gathered on Ray, including credit card charges and bank withdrawals, medical history, employment, address changes, etc. What does this chapter tell us about the way police detectives shape their view of a person and his or her possible motivations? How is that process similar to, or different from, the way a novelist creates a character?

3. Compare the book’s epigraph from Matthew 6:1–3 to the scene in which Ray, with Ruby present, gives Carla a check for the full amount of her son’s funeral [p. 109]. Ray’s ex-wife Claire comments, “Ray likes to save people, you know, sweep them off their feet with his generosity. It’s a cheap high if you’ve got the money, but basically it’s all about him” [p. 125]. How serious is this flaw in Ray’s character, and why does Price make Ray’s desire to help the novel’s central theme?

4. What is the effect of the novel’s structure—with chapters moving back and forth in time—on your reading experience? Why might Price have chosen to construct the plot in this way?

5. In one of Nerese’s many moments of insight, she muses about Ray:

“The constant white-black casting made her uncomfortable—no, made her angry; but that anger was tempered by the intuition that this compulsion in him wasn’t really about race; that the element of race, the chronic hard times and neediness of poor blacks and Latinos was primarily a convenience here, the schools and housing projects of Dempsy and other places like a stocked pond in which he could act out his selfish selflessness over and over…and that he was so driven by this need, so swept away by it, that he would heedlessly, helplessly risk his life to see it played out each and every time until he finally drew the ace of spades, or swords, and got the obituary that would vindicate him, bring tears to his eyes; key word, ‘beloved,’ if only he could figure out some way to come back from the dead long enough to read it.” [p. 215]

In Nerese’s view, Ray is driven primarily by narcissism, by an obsessive desire to be needed and to be thanked. Is her observation correct? Does this motive outweigh the good that Ray tries to do?

6. How incisive is Price as an analyst of race relations? In his desire to “give back,” is there any way for Ray to be comfortable about race, to enter his old community as an affluent white man offering help? Does Ray recognize that in giving Carla the money for the funeral he humiliates her, winning her resentment rather than her gratitude [pp. 109–110]?

7. Is Nerese the moral and emotional anchor of the novel? Why or why not? Given that she and Ray have come from the same place, how have they handled their lives differently? What are the differences in psychology of these two characters? What motivates them?

8. Discuss the relationship between Ruby and Nelson, two children of nearly the same age who are thrown together by Ray and Danielle’s sexual liaison. Why does Ruby refuse to apologize to Nelson when she hits him with the softball? What is the meaning of the story Ruby shares with Ray’s writing class [pp. 353–54]? Why does Price make children such a crucial part of the story?

9. Is Ray exploiting Danielle, or is she exploiting him in their sexual relationship? What motivates Danielle to involve herself and her son with Ray? She sees herself as an independent and self-motivated woman; Ray sees her as a woman who has chosen to stay in a marriage with a drug dealer [pp. 198–201]. Who is right?

10. Samaritan is a drama of redemption, or self-redemption. Why is shame referred to as one of Ray’s defining characteristics? Does he have good reason to feel ashamed of himself? Why does Ray need to redeem himself? How successful is he in his efforts to do so?

11. Who is the most likely suspect for the crime against Ray—Salim, Freddy Martinez, Danielle? To what degree is suspense—the “whodunit” quality—important in a novel like this?

12. How does the character of Salim come across? Why does Samaritan end with Salim, and a chapter called “Thank You” [pp. 370–77]?

13. Discuss Chapter 32, in which Nerese and Ray tell each other about their future plans. What do we learn about Nerese’s past and the way it shaped her life? What is she trying to tell Ray about adults’ responsibility to children? Does it seem that Nerese will be happier once she retires from the police department?

14. In a blurb for the hardcover Elmore Leonard stated, “I read Richard Price for the cool, spare sound of his writing, his words, the language he has in his bag that fits so exactly in his settings. The characters talk the talk.” Do you agree with his assessment? Find a few passages that exemplify Price’s strengths as a stylist and discuss their qualities with your group.

15. With Samaritan, Richard Price again reveals himself to be committed to writing novels that awaken his readers to raw and painful social problems. Charles Taylor commented:

“It seems to me that in reporting on some of society’s bedrock institutions (in this case, prisons and the police) and on communities that many of us are either cut off from or see solely in terms of social problems (thus robbing the inhabitants of their individuality) Price is doing work that we should expect from our major novelists. . . . Though Samaritan is his bleakest book, you put it down convinced he is trying to find, in the midst of racial and economic divisions, the things that we share. He’s the reporter-novelist as despairing humanist.” [Salon.com]

How powerful is Samaritan’s social vision? Does it have a message or a lesson for its readers? What questions and issues does the novel leave unresolved?

Richard Price grew up in the Bronx. He studied industrial design at Cornell University and writing at Columbia and Stanford. His first novel, The Wanderers, was published when he was just twenty-four. He is the author of seven novels, including the national bestsellers Freedomland and Clockers, which was nominated for the National Book Critics Circle Award. In 1999 he received an Award in Literature from the American Academy of Arts and Letters. His fiction, articles, and essays have appeared in Best American Essays 2002, The New Yorker, Esquire, The Village Voice, and Rolling Stone. He has written numerous screenplays, including Sea of Love, Ransom, and The Color of Money. He has also taught writing in schools in Jersey City and Newark. He lives in Manhattan with his wife, the painter Judith Hudson, and their two daughters.

The Ballad of a Small Player

Taipei
Back to Top