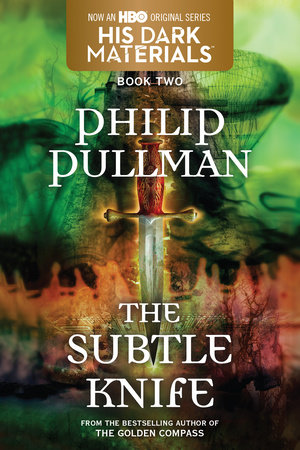 The questions, discussion topics, and author information that follow are intended to enhance your group’s reading of The Subtle Knife. The Subtle Knife is Book Two of Philip Pullman’s trilogy "His Dark Materials". In Book One, The Golden Compass, young Lyra Belacqua journeys through "a universe like ours but different in many ways." The most striking difference between Lyra’s world and ours is the existence of daemons. These spirit-creatures, physical manifestations of the human soul, can change shape until their human companions reach adolescence. Then each daemon settles into the animal form that best reflects the inner nature of its human counterpart.
In The Golden Compass, Lyra discovers that her mother, Mrs. Coulter, is conducting experiments in which children are severed from their daemons, turning them into emotionless, almost inhuman beings. Mrs. Coulter and her colleagues are doing this to learn more about a substance called "Dust, " which seems to accumulate on humans when they reach maturity. While many fear Dust, both Mrs. Coulter and Lyra’s father, Lord Asriel, see it as the source of great power. The Golden Compass concludes with Lord Asriel harnessing the power of Dust to create an opening in the atmosphere of his world, forging a bridge to another universe. This he fearlessly crosses, leaving Mrs. Coulter behind. Lyra perceives that Dust is good and vows to discover its secrets with the help of her "golden compass", or alethiometer, a truth-seeking device. And so Lyra and her daemon, Pantalaimon, follow Lord Asriel into the other world.
The Subtle Knife begins in our own world, where Will Parry, driven by curiosity about his mysterious, missing father and concern for his vulnerable, disturbed mother, accidentally kills an intruder. While fleeing, he finds a "window" into a sunlit otherworld. What could be a better refuge than a hidden universe? But this universe is a strange, empty place: a city that seems to have been abandoned in such haste that food is left rotting on plates at a sidewalk cafe. The inhabitants of the city, Cittágazze, have fled from the invading Specters, ghostlike creatures that devour the souls of adults. But Specters are harmless and invisible to children, and soon Will meets another fugitive child in Cittágazze: Lyra. Although he does not know it, their lives are soon to become forever intertwined when Lyra’s alethiometer gives her one simple command: Help Will find his father.
The richly imagined world of Book One seems almost quiet and simple when compared to the turmoil of Book Two. Here "Dust" is called "dark matter" and has been joined by a myriad of other complex phenomena, including the Specters and bene elim (angels). One protagonist has been replaced by two, Lyra and Will. Most significant of all, Lyra’s truth-giving compass seems to pale in comparison to the power of Will’s new acquisition, the subtle knife, the Æsahættr, the knife that will cut ANYTHING. What can it mean to be the bearer of such an instrument?

1. What is wrong with Will’s mother? Are her concerns real, imagined, or both? Why and how does Will protect her?

2. What does it mean when Lyra assumes Will’s daemon is "inside"? Do the people in Will’s world, our world, have daemons at all?

3. Why does Will’s being a murderer enable Lyra to trust him? What characters do Serafina Pekkala and Lee Scoresby decide to trust, and is their trust warranted? In what other ways does trust play an important role in this novel?

4. How has Will learned to make himself unnoticed by others? Relate this to the witches’ ability to make themselves invisible.

5. How do the Shadows that communicate with Lyra through the computer relate to dark matter and/or Dust? If Lyra can understand the Shadows as she understands the alethiometer, then is the computer also acting as a truth-giving device? What is the real origin of the Shadows’ messages?

6. On page 188, Giacomo Paradisi tells Will the rules for bearing the subtle knife. Why do you think Will must "never open without closing"? What did Paradisi mean by "a base purpose"? Compare these formal guidelines to the instinctive rules Lyra obeys when using the alethiometer.

7. Why is it significant that the possessors of the alethiometer and the subtle knife are children? What is the difference between innocence and experience? What has happened to Mrs. Coulter’s solders who have undergone intercision?

8. Lord Asriel is mentioned several times throughout the story, yet we never directly see him. He is planning a war that he cannot win without an object that he does not know exists. What does Lord Asriel symbolize in The Subtle Knife?

9. What did the "Cave" mean when it told Dr. Malone that she must be "the serpent"? Where do you think she is at the end of the story? Where is Lyra?

10. In what way can a knife that divides pathways between worlds and can sever bone, rock, and steel be called "subtle"?

11. DISCUSSION TOPICS IF YOU HAVE READ THE GOLDEN COMPASS AND THE SUBTLE KNIFE
In Book One, Lyra is clearly a leader. In Book Two, she seems to have become a follower, a servant to Will’s cause. Who is more powerful, Will or Lyra? Whose cause is more important? Is it the same cause?

12. Is the "psychic death" caused by severing the same as that caused by the Specters? Compare Tony Makarios and the servants at Bolvangar (Book One) to Tullio’s actions after Will takes the subtle knife and the final thoughts of Lena Feldt (Book Two). Relate these to the "natural" deaths suffered by Lee Scoresby and John Parry.

13. Armored bears, witches, severed children and adults, cliff-ghasts, Spectres, and angels are beings with spiritual qualities different from humans. Why does the authorintroduce so many creatures with alternative soul-states?

15. The Golden Compass takes place in a "closed" world where Lyra finds guidance through her newly-found alethiometer. In The Subtle Knife, boundaries between worlds have been broken, Lyra loses her alethiometer, and Will becomes the reluctant bearer of the knife. Explore the many parallels and opposites established between The Golden Compass and The Subtle Knife. How is the dualistic imagery of Lyra’s and Will’s worlds counterpointed by Cittaágazze?

16. Citing a passage from John Miltons Paradise Lost, Philip Pullman has named his trilogy "His Dark Materials." How might this citation, and the novels’ emerging themes, relate to the following quote:
"The prince of darkness is a gentleman." – William Shakespeare (King Lear)

The Prydain Chronicles by Lloyd Alexander
The Foundation Trilogy by Isaac Asimov
The Wonderful World of Oz by L. Frank Baum
Fahrenheit 451 by Ray Bradbury
The Sword of Shannara by Terry Brooks
Alice’s Adventures in Wonderland and Through the Looking-Glass by Lewis Carroll
2001: A Space Odyssey by Arthur C. Clarke
A Brief History of Time by Stephen Hawking
A Swiftly Tilting Planet and A Wind in the Door by Madeleine L’Engle
The Chronicles of Narnia by C. S. Lewis
The Giver by Lois Lowry
Song of the Lioness and The Immortals by Tamora Pierce
The Dark Is Rising series by Susan Cooper
Paradise Lost and Paradise Regained by John Milton
The Hobbit and The Lord of the Rings by J. R. R. Tolkien


From the Hardcover edition.
Learn More About His Dark Materials: The Subtle Knife (Book 2)
print

The Invisible Spy (The Forgotten Five, Book 2)
Back to Top