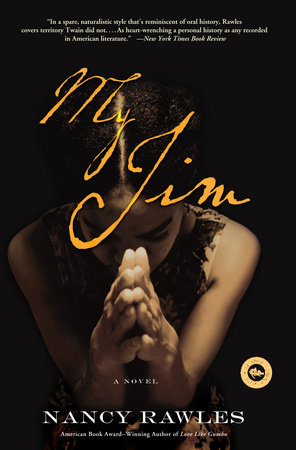 Written in the great literary tradition of novels of American slavery, from Beloved to The Known World, My Jim is a moving recasting of one of the most controversial characters in American literature, Huckleberry Finn’s Jim. His story is told through the eyes of his wife, Sadie Watkins, who mines her memory for the tale of the unquenchable love of her life. Faced with the prospect of being sold away from her and their children, Jim escapes down the Mississippi with a white boy named Huck, and Sadie is suddenly alone. Worried about her children, convinced her husband is dead, reviled as a witch, and punished for Jim’s escape, Sadie’s will and her enduring love for her husband animate her life and see her through to freedom.

1. Have you read Huckleberry Finn? How does My Jim alter your interpretation of that classic’s themes and attitudes? Is Sadie’s Jim the same man as Huck’s?

2. After a fever, Jim becomes a “seer,” able to predict the future. Do you believe he could really do this, or was there some other explanation for his accuracy? How did his ability to “see” help him and his fellow slaves?

3. Throughout the novel, small items–a button, a bowl, a knife–take on totemic significance. Discuss what each item meant to Sadie, and why such things became so important. Which one do you think was most important to her? Is there a similarly significant item in your own life?

4. The colloquial language in My Jim is reflective of a slave woman’s scant education, and at times challenging to understand. How did this affect your reading of the novel? In what ways are Marianne’s sections different from Sadie’s? Would it have been as successful if it had been written in standard English?

5. Discuss the Mississippi River’s power in the lives of slaves. How does it serve as a metaphor? What did it mean to Sadie, and to Jim?

6. Throughout the novel, superstitions and religion are treated with nearly equal reverence. Why do you think that is?

7. Marianne Libre has a choice–to leave with Chas, or to stay with Sadie. Why does she have such a difficult time making a decision? On page 14, Sadie says to her, “You scared to love cause you scared to lose.” How did Sadie’s experience with Jim enable her to understand that so clearly?

8. What function do the Marianne sections serve to the novel? How might it have been different if it were purely Sadie’s voice?

9. On page 17 Sadie says to Marianne, “Cant lets you go off to no prairie less you got your family with you.” Discuss the significance of the memory quilt Sadie and Marianne sew.

10. Where did Sadie find pleasure in her life? Was it real pleasure?

11. For slaves, the definition of “family” was by necessity different from what free people considered it. Who was Sadie’s family? What about her children? Jim?

12. Why didn’t Jim try to take Sadie with him when he ran? What were her feelings about him leaving? How would you have felt to be left behind in slavery?

13. How does this novel compare to other slave accounts you may have read, both fictional and non-fiction? What does it remind you of?

14. How does reading My Jim affect your thinking about race relations today?

15. Although the novel is entitled My Jim, is it really Jim’s story?

1.How did the idea for My Jim emerge?

For many years I have been interested in the continuing debate over whether or not to teach The Adventures of Huckleberry Finn in high schools and middle schools. As with any book we continue to teach more than a century after it was written, there are lessons in it for today. I felt it was time for a literary response to Jim. In Huckleberry Finn, we learn who Jim was and who he later became to Huck, but that’s a limited view. Who was he to his family and community? Who was he to his wife? I wanted to continue to expand the discussion of Jim. As My Jim developed, it became more of the story of Jim’s wife. In many ways, Huckleberry Finn is more about Jim than it is about Huck. And My Jim is more about Sadie, Jim’s wife, than it is about Jim.


2.What was the biggest challenge you faced writing My Jim?

My most difficult task was deciding how to tell the story. I studied many slave narratives and interviews with former slaves. I decided to take from both forms¯the harrowing, suspenseful narratives and the spare, heartbreaking oral histories¯with two important differences: Mine is a narrative that doesn’t end in escape, and it is told to an intimate as opposed to an interviewer. My Jim is a story told by Sadie, Jim’s wife, to her granddaughter by another marriage, Marianne. The two of them are making a quilt for Marianne to take with her if she decides to go west with her young love, a buffalo soldier named Chas Freeman. Because Marianne was taught her letters by her mother, who had learned in the Reconstruction schools for freedmen, and because she’s picked up additional lessons along the way, she is able to record her grandmother’s story. She makes mistakes in subject and verb agreement and her punctuation is limited, but otherwise her writing is pretty good.


3.What are your feelings about the character of Jim and Mark Twain’s treatment of him?

I believe Mark Twain wanted to make his story primarily about Jim but didn’t feel he could get away with it. So he wrote the adventures of Huck and Jim, two side-by-side stories of vulnerable and brutalized people escaping a world of man-made violence and cruelty and journeying down a wild and treacherous river. In Huckleberry Finn, when Huck finds Jim crying because he misses his family, he realizes his companion is a loving husband and father. This realization is what leads to Huck’s change of heart and turns him into an unlikely accomplice to Jim’s crime of freedom. It is this freedom that is central to My Jim, a freedom that results in the loss of family, the very loss that Jim is trying to avoid by escaping. Huckleberry Finn is a difficult book because it talks out of both sides of its mouth. I believe Mark Twain was making a strong point about Jim’s humanity at a time¯the end of Reconstruction¯when racism had reached a level of absurdity so violent and distorted that the humanity of Southern whites was a pressing international question. So Twain is making a case for Huck as well as for Jim. Ultimately, The Adventures of Huckleberry Finn can be read many ways; I like to read it for its study of freedom and confinement.


4.In My Jim, Sadie tells the story of her early life with Jim, revealing along the way the value of the broken objects she has carried with her from slavery to freedom. Where did you get the inspiration for these objects and for the quilt?

Several years ago, I attended a symposium about slavery at the University of Washington in which one of the presenters spoke about how slaves owned so little that the little they owned became hugely important to them. The inspiration for the objects did not come to me until several months after the conference, but the conference planted the seed.


5. What role does history play in your writing and your life?

All my writing is deeply rooted in history. From a play about the 1969 assassination of Seattle civil rights leader Edwin T. Pratt to a novel about a family struggling with the legacy of the 1965 Watts riots, my books and plays are steeped in the defining events of their times and places. I believe the past informs the present. My Jim is my first work set in nineteenth-century America. It tells the story of the family left behind when Jim makes his famous run for freedom on the Mississippi River in the company of an impoverished and abused white child. It references passages from that famous story along with events that took place in Missouri before the Civil War, some of which greatly influenced the young Samuel Clemens. In writing about Jim’s story, I wanted to write about life for one family in this pre—Civil War era as well as in post-Reconstruction Louisiana. I also wanted to write about enduring love existing under the most unbearable of circumstances. Though the characters in My Jim are fictional, their stories are inspired by the true stories of countless men, women, and children held captive in a young nation whose leaders had pledged an end to tyranny.


6. What kind of research did you do in preparation for writing My Jim?

I read a lot, and in the fall of 2003 I journeyed to Hannibal, Missouri, to learn something about the world of the young Samuel Clemens and the fictional Jim. Mark Twain based his characters on people who impressed him in childhood, and Jim is no exception. A favorite storyteller on his uncle’s farm is said to be the model for Jim’s character, but the real-life model of the adolescent boy aiding a runaway slave is Bence Blankenship, the older brother of Tom Blankenship, a childhood friend of Samuel Clemens who was the inspiration for the character of Huck. Bence befriended and fed an escaped slave named Nerium Todd who was hiding on Sny Island in the Mississippi not far from Hannibal. The relationship lasted for weeks. Later, when on a fishing expedition to Sny Island, the boys stopped to play in Bird Slough and came upon the mutilated corpse of Nerium Todd in the mire. He had been hunted down and chased into the swamp by woodcutters. I think Huckleberry Finn is Twain’s fantasy about what might have been in a world more humane than the one he grew up in.


7. What do you hope readers will get out of My Jim?

My Jim is an effort to marry recent scholarship about the lives of individual slaves with a popular American myth that speaks to the core of human relationships. It is a book that I hope will shed light on the amazing ability of some individuals to continue to love and honor themselves in the face of profound dishonor and continual danger. This story repeats itself countless times every day all over the world. I took inspiration from newspaper stories and war photography as well as from Viktor Frankl’s Man’s Search for Meaning, in which he recounts his experiences in a concentration camp. The miracle is that anyone at all can make it through horrific experiences of war and slavery and genocide with the ability to love. I am a great believer in love. I don’t see how we can transcend our cruelest history without it.
Learn More About My Jim
print

The Squatter and the Don
Maria Amparo Ruiz de Burton

The Letters of John and Abigail Adams
John Adams

The Price of a Child
Lorene Cary

A Man of Parts
David Lodge

The Clearing
Tim Gautreaux
Back to Top