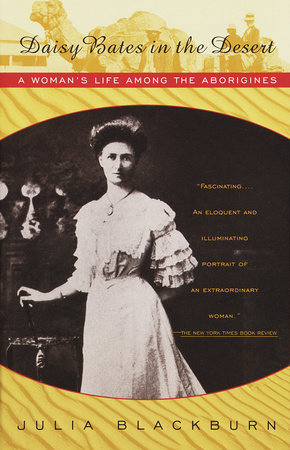 The questions, discussion topics, and reading list that follow are intended to enhance your group’s reading of Julia Blackburn’s Daisy Bates in the Desert. We hope they will provide you with a number of possible ways of looking at this entrancing book, a combination of biography, novel, and meditation.

For twenty-five years Julia Blackburn was fascinated by the haunting figure of Daisy Bates, an Englishwoman who emigrated to Australia in the early part of the century, was briefly married to the famous Breaker Morant, and returned to England to marry again. In 1913, when she was a middle-aged woman, Daisy Bates made another journey to Australia, this time to the Great Victoria Desert of South Australia. She ended up staying there for nearly thirty years, abandoning her husband and son and living among Aborigine people, who were being annihilated by the incursions of European technology, culture, and disease. A would-be anthropologist with no formal training, an ascetic who throughout her life was prone to having snobbish daydreams, a missionary who sought to minister to the physical welfare of "her people" rather than to impose an alien religion or culture on them–who sought, in fact, to save them from the fatal encroachment of that culture–Daisy Bates fit into no recognizable mold. She was also a habitual liar and fantasist for whom, it would seem, "the past had no fixed shape or pattern" [p. 21]. Her conflicting versions of her own life have long baffled biographers; Blackburn, adopting Bates’s own subjective interpretation of facts, events, and dreams, has created her own Daisy Bates in a daring and very personal literary interpretation of an extraordinary life. "I am Daisy Bates in the desert" [p.63], Blackburn writes–and proceeds to spin a rich tale that values imaginative truth over ascertainable fact.

1. What is the purpose of Blackburn’s frequent use of death imagery? What does she mean to imply about Daisy? About the Aborigines? About Australia itself? How does Daisy’s funeral compare with the one she had imagined for herself? "Death is not always sad" [p.99], Daisy says. What does the Aboriginal willingness to embrace death say about their culture as a whole? By extension, what does our unwillingness to confront it say about ours? Do you find Daisy’s own death to be a sad one?

2. Bates’s "paternalistic" (or, rather, "maternalistic") way of dealing with the Aborigines is an ethos that has come in for a great deal of criticism and derision since the breakdown of the British Empire. Daisy’s role as Kabbarli, the great white grandmother, can be seen as noble, offensive, or simply ridiculous, depending upon the viewpoint of the individual reader. Which do you find to be true? At the Government Conference, Daisy says that "these people are children but they are good children in need of protection" [p.173]. How much truth and sense is there in Daisy’s policy recommendations to the Conference? Is she unqualified to make such decisions because of her emotional involvement with the people, or does her very closeness to them make her advice invaluable?

3. Daisy’s statements that the Aborigines practiced cannibalism have never been accepted by the anthropological community. Did they seem convincing to you as you read the book? Do you believe that her stories of women eating their newborn babies might have been fantasies arising from her own feelings of resentment toward her son and her guilt over having abandoned him? Discuss Daisy’s complex attitudes and ideas of "family." Does the nuclear family hold any significance for her, or does she reserve her allegiance for the "family of man"? What, if anything, does motherhood mean to Daisy? Would you describe her as a loving person or a cold one? Narcissistic or selfless?

4. How does Blackburn use her descriptions of the Australian desert to give a concrete picture of Daisy’s internal, emotional landscape? Is it possible that the very bleakness of the desert is what drew Daisy to it? Is there something in her nature that was particularly responsive to the emptiness and purity of the desert?

5. In the book, the Aborigines are depicted as courteous at all times, but what is their real attitude toward Daisy? Do they love her? Do they simply tolerate her? Are they dependent on her, or is it she who is dependent on them? Daisy becomes part of their community, even taking part in their religious ceremonies, but to what degree, if any, does she ever consider herself one of their tribe? What do you think she means when she says that the Aboriginal rock paintings "fill her with envy" [p.50]?

6. Can you explain the stark contrast between the grandiosity of Daisy’s fantasies–her meetings with royalty, her rich family connections, the glamorous men who sought to marry her–with the extreme poverty and simplicity of the life she eventually chose for herself? How can she retain a personal fastidiousness so extreme that she refuses to wear anything but silk next to her skin, while embracing a life of great physical hardship? Why do these fantasies continue to be so important to her and her sense of who she is, even after years in the desert?

7. How does Blackburn’s anecdote about being offered the gypsy baby in Spain relate to the central part of her story? How does she resurrect it within her narration of Daisy’s life? Do you find the reappearance of this incident intrusive or enlightening?

8. Julia Blackburn has said that Daisy Bates "was a mystic without a clear God." Can you elucidate this statement?

9. What imagery does Blackburn use to emphasize the fragility of the desert landscape and of Aboriginal society? And what imagery does she use to evoke a sense of age and time in this "oldest existing land surface in the world" [p.87]?

10. Can you explain the significance to Daisy of the skeleton in the split tree that she and her husband see together in the lightning storm during the first year of their marriage? What does her husband’s reaction to the sight say about him and about Daisy’s eventual rejection of him? How does Daisy’s own interpretation of this sight change during the course of her life, as described by Blackburn?

11. Blackburn relates a number of Daisy’s dreams during the course of the narrative. What relevance do these dreams have in Daisy’s story? How does Blackburn use the dreams to create an anti-realistic, other-worldly aura around her characters?

12. "When you see them walking naked out of the desert," Daisy says of the Aborigines, "they appear like kings and queens, princes and princesses, but standing barefoot on the edge of the railway track, dressed in stiff and stinking clothes, black hands held out to receive charity from white hands, then they are nothing more than derelicts, rubbish that will soon be pushed to one side and removed" [p.107]. What do you find in this story to explain the extreme fragility of Aboriginal culture? Was its virtual demolition inevitable once it came into contact with European culture? Why, do you think, was it more vulnerable than African or Asian societies?

13. How does Daisy Bates compare with Radcliffe-Brown as an anthropologist? Which of them do you feel to be the more reliable–the observer who dissociates himself from his subjects or the one who enters her subjects’ own world? Daisy was not taken seriously as an anthropologist during her lifetime. Which of her opinions about Aboriginal society have ultimately proven to be correct? What kind of statement, if any, does Daisy Bates in the Desert make about the discipline of anthropology itself? Is it a science, an art, or a little of both?

14. Blackburn describes two types of Christian missionary: the old priest at Beagle Bay, who introduces Daisy to her work among the Aborigines, and Annie Lock, who presides over the Lutheran Mission school that Daisy describes as "a training ground for prostitutes and beggars." Is this a reasonable metaphor for the European, Christian civilization with its good and bad aspects?

15. Julia Blackburn boldly mingles her own psyche with that of her subject. She decides "to turn my idea of her thoughts into my idea of her speech" [p.8]; she even combines her own experiences and dreams with those of Daisy. In your view, is such artistic license justified in a work of nonfiction? Does Blackburn’s honest admission that she is imagining her heroine’s life rather than stating the strict truth validate her free use of invention? Does the fact that Daisy herself told lies make her a particularly appropriate subject for this kind of biographical treatment?

16. Imagining someone’s life is a literary challenge to which an author can respond in any number of ways. Julia Blackburn has chosen a highly subjective approach, as have a number of other authors. Can you compare her method with that of other writers you are familiar with? (The novels by Ackroyd, Mallon, and Styron, listed below, are interesting works with which to compare Blackburn’s.) Some people would say that all biography, even the most "objective," is inherently compromised by the biographer’s personal vision. Do you agree with this opinion? As you finished the book, did you feel that you had been given a picture of the "true" Daisy Bates?

17. If you had to place Daisy Bates in a bookshop or on a library shelf, how would you list it–under "Biography," "Travel," or "Fiction"? What would your reasoning be?

Ms. Blackburn is the author of two other biographical studies, Charles Waterton and The Emperor’s Last Island, an evocative account of Napoleon’s exile on St. Helena, and a novel, The Book of Color.

Julia Blackburn was born in London in 1948 and received a degree from York University. Her family originally comes from Mauritius; her father is Thomas Blackburn (1916-1977), the English poet. She lives in Suffolk, England, with her husband and two children.
Learn More About Daisy Bates in the Desert
print

A Year in the World

Flyover Lives
Back to Top