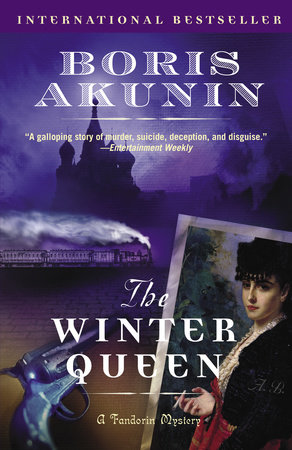 1. Confronted by an epidemic of suicides amongst his young countrymen, Erast Fandorin tells the highly experienced detective Xavier Grushin that “The very best of the educated young people are simply giving up on life—they’re suffocated by a lack of spiritual oxygen.” Explain the tension between the new and old generations in the novel, and why Fandorin thinks “living in your world makes us young people feel sick.” How and why have aspirations—for career, money, public honors—changed for the disenchanted youth?

2. What is the meaning of the code word “Azazel,” and how does this rebellious demon figure in the anarchists’ plot?

3. Humor and coincidence figure prominently in the plotting of The Winter Queen. Describe Akunin’s play on cultural perspective; for instance, in his characterization of “American Roulette.” Also, how does Fandorin’s luck come into play with the Lord Byron corset and the breathing practices of Indian Brahmin Chandra Johnson? Why is humor and chance so unexpected and thrilling in the plotting of a mystery novel?

4. Describe Xavier Grushin; is he merely an “old duffer,” or truly someone with a “genuine analytical talent,” as Fandorin says? Further, how does Grushin compare with the seemingly ingenious Detective Brilling, both as a detective and as a man of character?

5. During his interview with Fraulein Pfuhl and Lizanka, Fandorin is very conscious of his rank as “a civil servant, fourteenth class.” After all, as Pfuhl emphasizes, “order is order.” Describe the importance of rank in the novel, both on a romantic and an official level for Fandorin. Take a look at “The Table of Ranks” on pages 243 and 244; what would it have been like to live in a rigidly structured class system like that of Russia at the end of the nineteenth century?

6. Solving the mystery of Pyotr Kokorin’s public suicide turns out to be a far larger puzzle than even Fandorin initially had suspected. Describe the various principles of investigation that Akunin skillfully weaves into the narrative, such as cui prodest (“seek the one who benefits”) and Brilling’s deductive method. In the end, how does Fandorin’s pluck and intuition solve the mystery?

7. Lady Astair conducts her depraved orphanage based on the outwardly noble idea that “Finding one ’s own path is the most important thing for anyone.” Describe Astair’s educational philosophies and the larger plot against society that it entails. What does the twisted baroness mean when she says: “One cannot clean out the Augean stables without soiling one ’s hands.”

8. How does Akunin’s sleuth compare with the famed detectives of other mystery novels? Discuss how Fandorin’s moments of guilt, fear, vanity, and despair add dimension to his character, and how he matures over the course of his investigations and the novel.

9. Compare Erast Petrovich Fandorin’s love interests: the pure and innocent maiden Lizanka, and her foil, the dark Cleopatra, Amalia. By the end of the novel, a shocking catastrophe takes place on Fandorin and Lizanka’s wedding day. How did this traumatic cliff hanger alter the tone of the novel? What changes have taken place in Fandorin, both
physically and mentally in the course of the novel?

From the Trade Paperback edition.
Learn More About The Winter Queen
print

Disaster at the Vendome Theater

The Naïve and Sentimental Lover

The Letter Writer
Back to Top