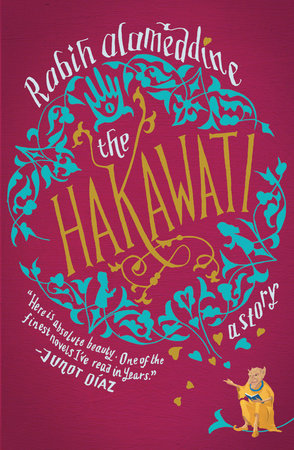 “Here is absolute beauty. One of the finest novels I’ve read in years.”
—Junot Díaz

The introduction, questions, and suggestions for further reading that follow are intended to enhance your group’s conversation about The Hakawati, an astonishingly inventive, wonderfully exuberant novel that takes us from the shimmering dunes of ancient Egypt to the war-torn streets of twenty-first-century Lebanon.

In 2003, Osama al-Kharrat returns to Beirut after many years in America to stand vigil at his father’s deathbed. The city is a shell of the Beirut Osama remembers, but he and his friends and family take solace in the things that have always sustained them: gossip, laughter, and, above all, stories.

Osama’s grandfather was a hakawati, or storyteller, and his bewitching stories—of his arrival in Lebanon, an orphan of the Turkish wars, and of how he earned the name al-Kharrat, the fibster—are interwoven with classic tales of the Middle East, stunningly reimagined.

1. The novel opens with the tale of an emir and his wife who have twelve daughters and seek the aid of their slave, Fatima the Egyptian, to help them have a son. This family tale runs parallel, for much of the book, to the story of Osama and his family. What links, if any, do you see between these major plotlines?

2. When Osama returns to his ruined former home in Beirut, he hasn’t lived there for twenty-six years. He feels out of place and alienated. How has the war changed life for his family? Do any of the ensuing events, the family and friends he sees, or the memories called up by his visit, help to create a renewed sense of belonging for him, or does his sense of alienation continue throughout?

3. Fatima tells Khayal that his desire for Jawad can only be fulfilled if his stories are seductive enough: “Please . . . favor us with your seduction. We sit here, parched earth awaiting its promised thunderstorm. Quench our thirst, we beg you” [p. 21]. What are some other instances of how stories are shown to be both seductive and life-giving?

4. In Turkey, under the Ottoman Empire, the British doctor Simon Twining and his Armenian maid produce Osama’s grandfather, the hakawati. Osama’s family, eventually Lebanese, is Maronite Christian on his mother’s side and Druze on his father’s side. While this primary story is set in Beirut, the other tales are set in many different countries and time periods. Does the Middle East seem to be just as much a melting pot as the United States? How does the novel give a sense of the many cultures and histories mingled under the term “Arab”?

5. How is The Hakawati like others novels you have read, and how is it not? What is its structure? What demands does it place upon you as a reader, and what are its pleasures?

6. The Hakawati presents the reader with a wide array of smart, funny, sexy, strong women: the two Fatimas, Lina, Osama’s mother, and many others. Given cultural stereotypes about Islam’s repression of women, does this come as a welcome surprise? Who are some of the most enjoyable female characters in the novel, and why?

7. How many people in the primary plot of Osama and his family would you consider to be storytellers (hakawatis)? Which of these characters is the most important storyteller, and why?

8. Fatima meets the djinn Afreet-Jehanam when he comes to take revenge for her claim to highwaymen that he was her lover: “He is no more than my plaything”, she boasted [p. 12]. As a result, he cuts off her hand [p. 70]. When she goes to the underworld to recover her hand, the two become lovers and she conceives the child who will become Shams. What are the most surprising twists in the long, intermittent story of Fatima, and why is she a great character? What, if anything, does this Fatima have to do with the other one, Osama’s friend who lives in Rome?

9. Shams means “sun” in Arabic; Layl means night. Shams Tabrizi is an important figure in the Divan of the Sufi poet and mystic, Rumi. The story of Shams and Layl may also be based on the ancient tale of the lovers Layla and Majnoun. While Alameddine improvises freely upon ancient sources, what interpretations might be drawn from the love between Layl and Shams?

10. Fatima’s struggle with the magician King Kade, “the master of light,” is full of astonishing events as she tries to find a way to bring Afreet-Jehanam back to life. King Kade is finally defeated when she throws mud onto his gleaming white robe. How does this episode—Fatima going on a journey to the upper world to find King Kade—work with the tale of Orpheus and Eurydice, which Uncle Jihad tells Osama in an interlude of the Fatima tale [pp. 171-179]?

11. Osama asks Uncle Jihad if he will come for him to the underworld, if he, Osama, were to die young like Eurydice [p. 178]. Since all of the stories in The Hakawati are told in the context of the fact that Osama’s father is dying, why is this exchange particularly relevant? What is puzzling about Uncle Jihad’s death?

12. Soon after his grandfather’s funeral, Osama is having an oud lesson with his teacher, Istez Camil, who points out that he is playing without feeling [p. 209]. What has happened to Osama, and why does he give up the oud for the guitar shortly after this? What does the oud represent, and why is the surprise gift of another oud, from his niece, so moving [pp. 395-97]?

13. How would you describe the style in which Alameddine has reimagined and retold the ancient stories in this book? How does he shift the language and humor in the traditional tales into a register that a contemporary audiences can relate to?

14. One of the epigraphs to Book Four is from Fernando Pessoa: “Literature is the most agreeable way of ignoring life” [p. 403]. Another is from Eric Hoffer: “Man is eminently a storyteller. His search for a purpose, a cause, an ideal, a mission and the like is largely a search for a plot and a pattern in the development of his life story-a story that is basically without meaning or pattern” [p. 403]. How do these ideas relate to the many plots, and possible patterns, in The Hakawati?

15. The central story is that of Osama and his family gathered in the hospital room of his dying father. Is the proliferation of stories a vast diversion from the inevitable, approaching death of Osama’s father? Do the stories have the effect of stopping time? What is the novel’s perspective on time?

16. When Uncle Jihad tells Osama, “Never trust the teller, trust the tale” [p. 206], the saying is funny in the context of the family name, al-Kharrat, which means fibster. Are stories lies, or are they more true than reality in certain ways? What is Osama like as a narrator of the main story?

17. What picture do Osama’s various recollections conjure of his relationship with his father? Why does his father not remember the same things he remembers, like the incident of the falcon hurting Osama’s arm? Is Uncle Jihad right when he says, “Events matter little, only stories of those events affect us” [p. 450]?

18. What is the effect of the final scene, in which Osama begins to tell his father the stories his grandfather told him, including stories of his father as a boy? What kind of ending does this create? Why does Alameddine end with the word “Listen”?

Rabih Alameddine is a painter and the author of Koolaids, The Perv, and I, the Divine. He divides his time between San Francisco and Beirut.

The Book of Strange New Things
Back to Top