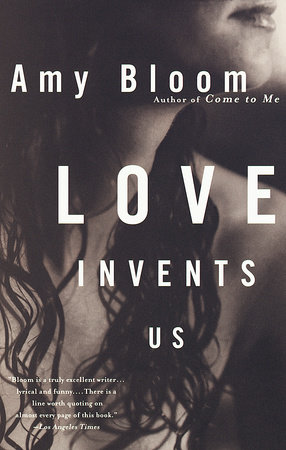 The questions, discussion topics, author biography, and suggested reading list that follow are intended to enhance your group’s reading of Amy Bloom’s Love Invents Us. We hope they will give you a number of interesting angles from which to view this rich novel of passion, desire, and the universal search for belonging.

As an adolescent, Elizabeth Taube is shy and chubby. She escapes her remote parents and the antiseptic atmosphere of her too-perfect Long Island home in books and by stealing from the local five-and-dime. But as she matures she discovers a smoldering sensuality and an overwhelming urge to love and be loved. The first person she bestows her love on is the middle-aged furrier Mr. Klein, who sees in her all the beauty her parents have never noticed. Later there is Mrs. Hill, the elderly woman she cares for and who comes to mean more to her than her own family. And then there is Max Stone, forty-nine years old and father of three, for whom Elizabeth becomes an adored but finally unobtainable obsession. When Elizabeth meets Huddie Lester, star player on her high school basketball team, she is finally ready for adult love, and their urgent passion takes them far past the point their families, and their world, find acceptable. Huddie and Elizabeth are separated; but the passing years eventually point the way toward a tenuous resolution.

1. Can you explain why Amy Bloom has given her novel the title Love Invents Us? How are the various characters in the book invented or defined by love rather than, for instance, by family or social identity? Does Mr. Klein take advantage of an innocent child, or is his relationship with Elizabeth a positive one? Does Bloom portray Mr. Klein with affection, or does she imply that his feelings for Elizabeth are not really benign?

2. Why do you think Elizabeth’s mother has developed into the kind of person she has? “Guilt and love were as foreign to her as butter and sugar” [p. 9], Elizabeth says. Do you think that is true, or do you see evidence of love in the mother’s feelings for her daughter?

3. Is it safe to say that Elizabeth seeks parental figures in the older men in her life–Mr. Klein, Mr. Canetti, and Max Stone–or is this formulation too simplistic? Is her interest in older men due to some essential lack in her own family?

4. Why does Elizabeth steal?

5. How would you characterize the relationship between Elizabeth and Mrs. Hill? What does Mrs. Hill provide that Elizabeth’s mother has never given her, and what does Elizabeth give Mrs. Hill that is not provided by her daughter, Vivian?

6. How much affection does Elizabeth feel for her father, and how much scorn? To which of her parents does she feel closer?

7. Why does Elizabeth arrange for Max and Mrs. Hill to meet [p. 55]? What does she hope the visit between them will bring about, and does she get what she wants from that visit?

8. If Elizabeth doesn’t like Max’s touch, why does she keep the “affair” going for so long? What is it about him that fulfills an essential need in her? Do you find that Elizabeth is cruel to Max, a “tease”?

10. What effect does Elizabeth’s miscarriage have on her thoughts, feelings, beliefs, and priorities? In what ways does it change her life forever? Afterward, she says, “I wanted not to abandon anyone ever again. I wanted to be good” [p. 84]. What does she mean?

11. Why does the author have Elizabeth narrate Part One, switch to third-person narration in Part Two, and then back to Elizabeth in Part Three? What effect do these changes have upon the experience of reading the story?

12. Why don’t Burf and Arlene relent and let Huddie’s letters be sent to Elizabeth? To whom are they being loyal, and are they right to do as they do?

13. How have Huddie’s parents, Gus and Nadine, affected his life and helped to make him what he is? Do you have any respect for Gus’s point of view, or do you think he is unnecessarily harsh with Huddie? To what extent does the issue of race enter into his decision to send Huddie away from home?

14. At Mrs. Hill’s funeral, Elizabeth comes up against “the slap-obvious truth that this place was not her home, any more than her mother’s house was, that her only home had been Mrs. Hill’s footstool and Huddie’s narrow bed” [p. 110]. What concept of “home” does the novel finally endorse?

15. Why does Elizabeth decide to care for Max when he becomes ill? Does her decision spring from guilt or from love?

16. When she fears that Max may be dying, Elizabeth reflects that “He was a good father” [p. 170]. What does she mean by this? Is it really as a father that she sees Max?

17. Why did Huddie choose to marry June, of all the women he could have married, and what makes their marriage work? When Huddie refuses to leave June for Elizabeth, she calls him a “gutless son-of-a bitch” [p. 178]. Do you agree with her opinion that Huddie shows gutlessness at this point, or is his decision a brave one? Why does he finally decide, fifteen years later, to come back to Elizabeth?

Amy Bloom’s collection of short stories, Come to Me, was a finalist for the National Book Award and the Los Angeles Times Fiction Award. Her work has appeared in The New Yorker, Story, Antaeus, River City, American Fiction, and other fiction magazines, and has been anthologized in the 1991 and 1992 Best American Short Stories collections and in the 1994 O. Henry Prize Story Collection. A contributing editor for New Woman and the Boston Review of Books, Amy Bloom lives in Connecticut.
Learn More About Love Invents Us
print

The Lay of the Land

Black Swan Green
Back to Top