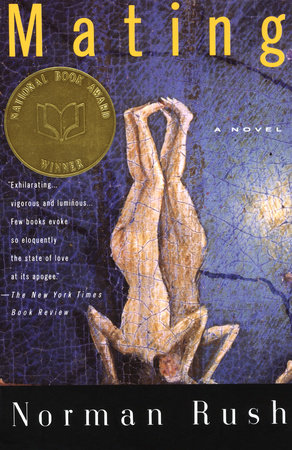 “Exhilarating . . . vigorous and luminous. . . . Few books evoke so eloquently the state of love at its apogee.” —The New York Times Book Review

Set in Botswana in the early 1980s, Mating is narrated by an American graduate student in anthropology who feels a compulsion to “tell everything,” to record everything that happens to her. The result is a sprawling, complex, confessional narrative that explores the equally extraordinary inner lives and outer circumstances of its two main characters, the narrator and the man she falls in love with, Nelson Denoon. Denoon is a scourge and star academic, the author of the classic Development as the Death of Villages, who is now working on a utopian experiment: a solar-powered, egalitarian, matriarchal village deep in the Kalahari. When the narrator sets off alone across the desert to find Denoon and his highly secretive project in Tsau, she enters a world unlike any she has experienced before and finds a man more complicated and more intellectually challenging than any she has ever known.

While Mating is very much a love story, exploring the shifting nuances of love with a subtlety and insight seldom encountered in American fiction, it is also a novel of great intellectual sweep that seems to comment on everything. History and politics, psychology and religion, poetry and science, economic systems and the Tao Te Ching all come within the novel’s capacious purview. And it is a book that asks, and then brilliantly explores, some profoundly important questions: how can we create a just society? What is the nature of a truly equal relationship? What is the relation between past and present, the personal and the political, and between reality and the narratives used to record and represent that reality?

1. Mating is narrated in the voice of a woman, a graduate student in nutritional anthropology. Why might Norman Rush have made this particular narrative choice? How convincing is his depiction of a woman’s consciousness and point of view? Why is it important that the story be told by a woman? By an anthropologist?

2. The narrator describes herself as suffering from “scriptomania,” [p. 407] the need to get everything in her life into writing. “The point is to exclude nothing” [p. 26]. Why does she feel such a compelling urge to write everything down? What is the value of “telling everything”?

3. Why does the narrator describe her affairs with men just prior to meeting Denoon? How do they set up or illuminate what follows? In what respects is Denoon different from, and superior to, the men who precede him?

4. What are the main characteristics of life at Tsau? In what sense is it an attempt at utopia? How is it different from both Western and African societies? Does it offer a successful alternative to these societies?

5. The narrator observes, “One difference between women and men is that women really want paradise. Men say they do, but what they mean by it is absolute security, which they can obtain only through utter domination of the near and dear and the environment as far as the eye can see” [p. 44]. Is this an accurate assessment? In what ways does Tsau seek to alter this version of paradise as male domination? What other hard truths does the novel deliver about relations between men and women?

6. Why is organized religion kept out of Tsau? What does Denoon believe to be the taproot of religion?

7. What picture emerges of the African residents of Tsau? What role do such characters as Dineo, Dorcas, and Raboupi play in the novel? How do they regard the only whites in Tsau, the narrator and Denoon?

8. After a bitterly contentious parlamente meeting, in which Denoon is verbally attacked, the narrator remarks “Yesterday was a catastrophe trying to tell us something like that Tsau is an organism trying to deal with us as foreign bodies. Yesterday was only the latest trope” [p. 380]. Why do the villagers grow hostile to Denoon? Why do they mistrust him? In what senses are Denoon and the narrator “foreign bodies”?

9. The narrator tries to avoid thinking of marriage as “a form of slowed-down wrestling where the two parties keep trying different holds on each other until one of them gets tired and goes limp, at which point you have the canonical happy marriage, voilà” [p. 381]. What kind of relationship do she and Denoon have? What has drawn them together? What threatens to pull them apart?

10. Mating is a vast and intellectually challenging novel that incorporates history, politics, philosophy, anthropology, economics, feminism, and much more into its narrative scope. Why has Norman Rush chosen to call it Mating? Is it chiefly a love story?

11. During an argument, Denoon asks the narrator, “Can’t anything be innate?… Does everything have to be an exfoliation from the minutiae of our miserable childhoods?” [p. 208] What connection does the novel reveal between Denoon’s childhood and his adulthood? According to the narrator, what are the seminal and shaping events of his early life? Is Denoon right to question the explanatory value of referring everything back to one’s childhood?

12. Does the narrator make the right choice by leaving Denoon and Africa? Is she correct in thinking Denoon had suffered a nervous breakdown and become “insanely passive,” an “impostor,” after his ordeal in the desert? Or did Denoon have a genuinely mystical experience?

13. After she returns to the United States, the narrator writes, “Being in America is like being stabbed to death with a butter knife by a weakling” [p. 470]. What does she mean by this? What does this characterization suggest about the differences between life in Africa and America? Why would her life in Africa incline her to experience America in this way?

14. At the end of the novel, after she has returned to the states, the narrator argues that the major affliction of our age is “corporatism unbound.” She goes on to say “What is becoming sovereign in the world is not the people but the limited liability corporation . . . that’s what’s concentrating sovereign power to rape the world and overenrich the top minions who run these entities”; and, finally she asserts that the “true holocaust in the world is the thing we call development . . . the superimposition of market economies on traditional and unprepared third world cultures” [p. 471]. Have events in the past decade, in the United States and around the world, confirmed or refuted these arguments?

15. Mating ends with the narrator asserting that she is going back to Africa? Why does she make this decision? Why does Rush choose to end the novel in this way?

Norman Rush was born and raised in the San Francisco area, and graduated from Swarthmore College in 1956. He has been an antiquarian book dealer, a college instructor, and, with his wife, Elsa, lived and worked in Africa from 1978 to 1983. His first book, Whites, a collection of stories, was published in 1986. Mating is his first novel. It was awarded the National Book Award for fiction.

Nights When Nothing Happened

Martin Dressler
Back to Top