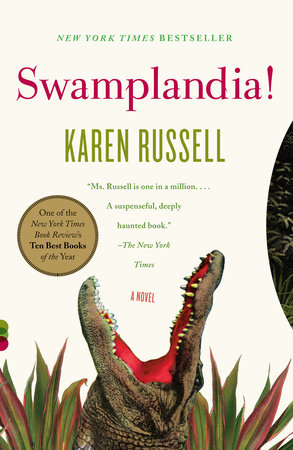 The questions, discussion topics, and reading list that follow are intended to enhance your reading group’s discussion of Swamplandia!, the eagerly awaited first novel by Karen Russell, acclaimed author of the short story collection St. Lucy’s Home for Girls Raised by Wolves.

“This was the first time I’ve read Karen Russell’s work, and I was dazzled. It’s very rare, among the tonnage of manuscripts and galleys that land upon one’s desk, to come across a young novelist so inventive and versatile, yet so thoroughly in control. Also, I’m a sucker for any plot line that features man-eating reptiles. . . . Passages of this fine novel call to mind Conrad, García Márquez, and even—for those who have kids—Judy Blume. . . . I can’t recall the last time I came across a character who shines as brightly as Ava, or a first novel that made such a rich and lasting impression.” —Carl Hiaasen

From the celebrated twenty-nine-year-old author of the everywhere-heralded short-story collection St. Lucy’s Home for Girls Raised by Wolves comes a blazingly original debut novel that takes us back to the swamps of the Florida Everglades, and introduces us to Ava Bigtree, an unforgettable young heroine.

The Bigtree alligator-wrestling dynasty is in decline, and Swamplandia!, their island home and gator-wrestling theme park, formerly #1 in the region, is swiftly being encroached on by a fearsome and sophisticated competitor called the World of Darkness. Ava’s mother, the park’s indomitable headliner, has just died; her sister, Ossie, has fallen in love with a spooky character known as the Dredgeman, who may or may not be an actual ghost; and her brilliant big brother, Kiwi, who dreams of becoming a scholar, has just defected to the World of Darkness in a last-ditch effort to keep their family business from going under. Ava’s father, affectionately known as Chief Bigtree, is AWOL, and that leaves Ava, a resourceful but terrified thirteen-year-old, to manage ninety-eight gators and the vast, inscrutable landscape of her own grief.

Against a backdrop of hauntingly fecund plant life animated by ancient lizards and lawless hungers, Karen Russell has written an utterly singular novel about a family’s struggle to stay afloat in a world that is inexorably sinking. An arrestingly beautiful and inventive work from a vibrant new voice in fiction.

1. Now that you’ve read the novel, go back and reread the epigraph. Why do you think Russell chose this quote?

2. Some of these characters first appeared in the story “Ava Wrestles the Alligator” in Russell’s collection, St. Lucy’s Home for Girls Raised by Wolves. Have you read that story? How does it compare to the novel?

3. “‘Tradition is as important, kids,’ Chief Bigtree liked to say, ‘as promotional materials are expensive.’” (page 6) Did the Chief show this in his actions? Which of the Bigtree tribe members paid the most respect to tradition?

4. How did Chief’s myth-making affect his children? How might things have been different if he’d been more truthful?

5. On page 36, Chief introduces his theory of Carnival Darwinism, which he thought would save Swamplandia! How might it have been successful? Why wasn’t it?

6. Where else does the notion of evolution come into play?

7. Belief—in Carnival Darwinism, in ghosts—plays a large role in the novel. What prompts Ossie’s beliefs? Ava’s? Where is the turning point in their belief systems?

8. Why do you think Ossie sees Louis and other ghosts, but never Hilola?

9. What does Ava’s red alligator represent? And the melaleuca trees?

10. Why do you think Russell interrupted the novel for the story of the Dredgeman’s Revelation? What exactly is the “revelation”?

11. There are biblical references throughout the book, especially in the World of Darkness sections. Why does Russell include them?

12. How do Kiwi’s actions affect his family? What do we learn via his sojourn on the mainland?

13. On page 183, the Bird Man tells Ava, “Nobody can get to hell without assistance, kid.” How does this compare to the quote from Dante that opens the chapter? What does it tell us about his character?

14. The three Bigtree children are innocent for their ages. Which one matures the most over the course of the novel?

15. The Bird Man calls the ending of the Dredgeman’s Revelation “a vanishing point.” (page 221) What does he mean by that?

16. Both the Bird Man and Vijay act as guides to a Bigtree sibling. How does each approach his role?

18. On page 247, Ava recites a credo: “I believe the Bird Man knows a passage to the underworld. I believe that I am brave enough to do this. I have faith that we are going to rescue Ossie.” Was she right about any of this?

19. Did the Bird Man believe in the underworld, or did he have an ulterior motive all along?

20. How does Kiwi’s use of language change during the novel? What does it reflect?

21. Like the Dredgeman, several of the Bigtrees have revelations. Whose is the most surprising?

22. What is the significance of the Mama Weeds passage? What do we learn from it?

23. Why doesn’t Ava ever tell anyone what the Bird Man did?

Karen Russell, a native of Miami, has been featured in The New Yorker’s debut fiction issue and on The New Yorker’s 20 Under 40 list, and was chosen as one of Granta’s Best Young American Novelists. In 2009, she received the 5 Under 35 award from the National Book Foundation. Three of her short stories have been selected for the Best American Short Stories volumes. She is currently writer-in-residence at Bard College.

Ape House
Back to Top