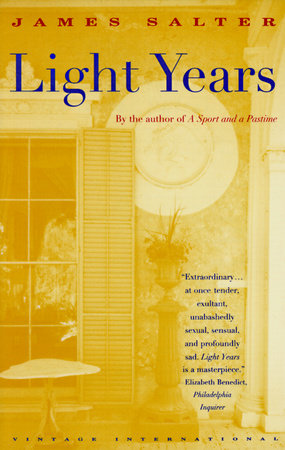 The discussion topics, author biography, and bibliography that follow are meant to enhance your group’s reading of James Salter’s Light Years. We hope that they will provide you with new ways of looking at–and talking about–a novel that has engrossed readers since its original publication in 1975 and that has contributed to its author’s reputation as one of the most radiant prose stylists at work in the English language. Even the most cursory reading of this book makes it clear that Salter is also a supernaturally acute observer of the subatomic fields that flicker between men and women as they fall in and out of love. He is a novelist with the unblinking gaze of a scientist.

Light Years is not so much the story of a marriage (it may not be a story at all, in the familiar sense of that word) as it is a time-lapse portrait of one, the kind of portrait that might have been painted by Seurat. Its protagonists, Viri and Nedra Berland, are observed over a period of some twenty years. We see them hosting dinners at their house in the Hudson River valley, shopping at the finest stores in New York, playing with their children on the beach at Amagansett, in bed with each other and with their lovers. Salter follows them through contentment, disillusionment, and bereavement, and into the black hole of divorce. From that hole Nedra emerges energized, traveling, taking lovers and shrugging them off, basking finally in the true love of her children before her early death. But Viri never fully surfaces; without Nedra he becomes the failure he always feared he might be: gets humiliatingly drunk at the home of friends who once envied him, marries, badly, an Italian woman who can hold him only through guilt and pity.

This is not to suggest that Viri is Nedra’s victim, any more than Nedra is someone else’s. Salter’s view of marriage is informed by an aesthetic that is utterly at odds with fashionable psychologies of blame. Each protagonist’s life is "mysterious, it is like a forest; from far off it . . . can be comprehended, described, but closer it begins to separate, to break into light and shadow, the density blinds one" (p. 23). And that life may be changed in a moment, as Nedra’s is when she reads a single paragraph in a biography of the painter Kandinsky and decides to leave Viri. Given such a view of life, how can we attempt to weigh its actions on any moral scale? Light Years does not invite judgment or even easy empathy with its flawed human beings. It asks us to watch them with the sort of compassion that Nedra herself feels one night, as she surveys herself in bed with the husband she no longer loves: "If they had been another couple she would have been attracted to them, she would have loved them, even–they were so miserable" (p. 125).

1. From its opening description of the Hudson River valley, Light Years is very much a novel of place: the west bank of the Hudson, New York City, Amagansett, Rome. What sort of details establish these various settings? How does the author endow each location with a different mood and associate it with a different phase or aspect of his characters’ lives?

2. James Salter has written screenplays, so it’s no coincidence that Light Years is a highly cinematic book. It is filled with the prose equivalent of montage, wide-shots, and jump cuts, as in the scene on pages 60-66, in which alternating paragraphs depict Jivan dining with the Berlands and–later?–earlier?–making love with Nedra. How do such cinematic techniques contribute to the novel’s effect? How do they heighten or play against Salter’s unabashedly poetic language?

3. How does Salter develop the characters of his protagonists? Contrast the description of Nedra on page 8 with the one of Viri on page 1

4. In what ways do they parallel each other? (We are told, for example, that Nedra has "mint on her breath" while Viri’s breath is "faintly bad.") How are these initial impressions reinforced or contradicted by what we later see of Viri and Nedra’s behavior? 4. Are the Berlands a well-matched couple? In what ways do they seem compatible? In what way are their personalities at odds? How would you compare them to couples such as Peter and Catherine Daro, the Marcel-Maases, or Eve and Arnaud? Why might Salter have included these other couples in his narrative?

5. Viri is haunted by the fear of obscurity and failure. Nedra dreads age, poverty, and, above all, ordinariness. ("The only thing I’m afraid of are the words ‘ordinary life’" (p. 174). How central are these fears to their characters? Does Salter give us any clues about their origins? In what ways do they help bring about Viri and Nedra’s divorce?

6. Are you surprised to learn that the Berlands are unfaithful to each other? In what way do their extramarital liaisons–and, particularly, the manner of their ending–foreshadow their divorce and the different directions their lives take in its aftermath? Does Salter give us any evidence that Viri and Nedra know about each other’s affairs? Is infidelity the thing that tears them apart? Paradoxically, might it be the thing that holds them together for so many years?

7. What other indications do we have that Viri and Nedra are heading toward a breakup? Why do so many years elapse between the time that Nedra acknowledges that her marriage is dead (p. 107) and her decision to leave it?

8. Ultimately, is there an explanation for the Berlands’ rupture? Is either partner to blame and is "blame," in the sense of moral responsibility, an appropriate term within this novel’s context? Are we meant to judge either Viri or Nedra? Ought we view their marriage as a "failure"?

9. What kind of parents are the Berlands? What do we learn about their feelings for their daughters and their children’s feelings for them? At what points in the novel do their relationships with their children change? How do Franca and Danny react to their parents’ divorce? Does Salter give us any reason to believe that the girls’ later lives are shaped by their parents’ example?

10. In an interview (in The Paris Review, CXXXIII, p. 81), Salter has said, "In my books, the woman is always the stronger." In what ways is Nedra stronger than Viri?

11. In Nedra, Salter has created not only a convincing woman character but a convincing feminine subjectivity. How do Nedra’s imagination and perceptions–and particularly her sensuality–differ from Viri’s?

12. Even as the threads that hold Viri and Nedra together fray, people around them are dying: the little girl whose father once towed her on the ice; Nedra’s father; Peter Daro (of a bizarre ailment that literally turns his flesh to wood). Even the dapper and irrepressible Arnaud Roth is maimed during a mugging, after which he vanishes from the Berlands’ circle. What role does death play in Light Years? What relation does Salter posit between the death of love and death itself?

13. Light Years covers a span of almost twenty years, beginning when Nedra is twenty-eight (p. 8) and ending with her death at the age of forty-seven (p. 296): the reckoning is easy to make, since Salter regularly updates us on the year or the ages of his characters. Why might he do this? In what other ways does he mark the passage of time?

14. Against these precise chronological reckonings Salter establishes another sort of time, one that is impressionistic, almost pointillistic. As Viri observes of life at the novel’s end, "It happens in an instant. It is all one long day, one endless afternoon, friends leave, we stand on the shore" (p. 308). Where in Light Years is time dilated or compressed and to what end? How might the theory of relativity–which posits that time passes more swiftly as one approaches the speed of light–inform this novel, beginning with its title?

15. At different points in the narrative we see Nedra consulting a dream book, reading Arnaud’s tarot cards, and reading her own palm. How accurate are these readings? Where in this novel does Salter deliberately mislead the reader, introducing characters who appear significant but disappear from the action, signaling turns of plot that never materialize? Is the future in Light Years something that can be predicted? Do events in this novel feel inevitable or arbitrary? If we accept the idea that a novel’s plot consists of the causal relation among its events, can Light Years be said to possess a plot?

16. The characters in Light Years communicate obliquely. Nedra doesn’t tell Viri that she wants to leave him; she says, "I don’t want to go back to our old life" (p. 200). In spite of Viri’s entreaties, she never explains what she means by that old life or if she does, we do not hear her. What other things in Light Years remain unsaid, both by the characters and by the author? How does this silence determine events in the novel?

17. The narrator announces that he will reveal Nedra’s life "from the inside outward" (p. 7), but what follows is a description of the house where she and Viri live and the objects with which they have furnished it. What do these people’s possessions reveal about them? To what extent can we read Light Years as a novel of property and possessions or, more broadly, as a novel of surfaces?

18. "There are really two kinds of life," Salter writes. "There is…the one people believe you are living, and there is the other. It is this other which causes the trouble, this other we long to see" (p. 24). And: "Their life was two things: it was a life, more or less–at least it was the preparation for one–and it was an illustration of life for their children" (p. 69). In what way is the Berlands’ life divided? How might it be described as the "preparation" for a life? What is hidden beneath its appearances, and how do their life’s hidden aspects contribute to the destruction of the façade? Is the notion of a hidden life obsolete in an age when people air every wish, fantasy, and resentment, not only in their bedrooms but on daytime talk shows?

19. When Viri tries to see the blemishes in his contentment, its surfaces blind him (p. 197). Yet earlier Salter writes: "Life is weather. Life is meals. Lunches on a blue checked cloth on which salt has spilled. The smell of tobacco. Brie, yellow apples, wood-handled knives" (p. 25). Do the domestic surfaces that fill this novel, and which Salter describes with such evident love, conceal some mysterious inner truth? Or do they constitute that truth itself? Is that truth any less mysterious for being made up of surfaces?

Who Will Run the Frog Hospital?
Back to Top