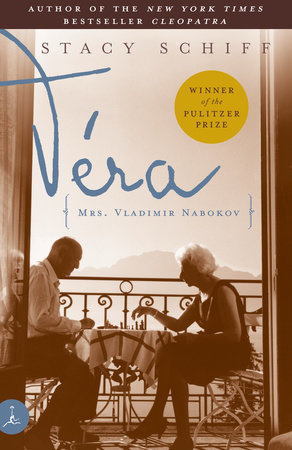 This discussion guide will assist readers in exploring Vera. Hopefully, it will help create a bond not only between the book and the reader, but also between the members of the group. In your support of this book, please feel free to copy and distribute this guide to best facilitate the program. Thank you.

Drawing on a wealth of unpublished materials, including Vladimir Nabokov’s  diaries and his letters to Véra, Stacy Schiff paints a discerning portrait of an elusive couple. Hers is a startlingly different image of the great writer, remembered best for his pronouncements and posturing. And she gives center stage to the disarming woman who was so much at the heart of it all, whose influence came so much to bear on the literature. In a narrative that combines superb scholarship with elegant prose, she offers up the crucial, missing piece of the Nabokov story.

1) l. Schiff describes the Russia of Vera Slonim’s childhood as one in which Jewish families obligatorily engaged in "what must have seemed like a colossal, rigged game of Simon Says" (p. 20). Do you think this tells you anything about the woman who would become Mrs. Vladimir Nabokov? How did Vera Slonim’s father shape the person she would become? Do you think it mattered that her mother was to a large extent invisible in her own childhood?

2. Do you think the Nabokovs’ joint gift for synesthesia–"the ability to transfer the observations of one sense into the vocabulary of another" (p. 38)–had any impact on their relationship?

3. To what do you attribute Vera Nabokov’s secretiveness? Relatedly, how do you explain the couple’s unwillingness to answer the question of how they first met?

4. Do you see Vera Nabokov as a victim? Does your view of her change–once, or incrementally, or not at all–in the course of the biography? Does she strike you as an appealing character?

5. In your opinion, was the Nabokovs’ a happy marriage? Do you think Nabokov’s passionate affair of l937 left a lasting mark on the marriage? Did that affair come as a surprise to you, or did you sense it coming?

6. At Vera Nabokov’s first encounter with a new Goethe scholar at Cornell, she immediately informed him, "I consider Faust one of the shallowest plays ever written" (p. l87). To what do you attribute her statement?

7. How do you reconcile Vera Nabokov’s claim that her English was not strong enough to permit her to write something about her husband with the masses of letters she did compose?

8. Why do you think the author lists the reasons the Cornell students provided for Vera Nabokov’s presence in her husband’s classroom (pp. l75-6)?

9. What did Vera Nabokov think of Lolita? Are her feelings toward the novel consistent? To your mind, was she happy to see it published?

10. The relationship between Vladimir Nabokov and Edmund Wilson is one of the great vexed literary friendships of our time. Would the friendship have played itself out differently had Vera not been part of the picture?

11. "Generally she held people–herself especially–to the standards of her husband’s literature, standards to which few of us, and even fewer publishers, rise," writes Schiff (p. 305). Is it your impression that Mrs. Nabokov was reasonable and the world less so, or vice versa?

l2. Why do you think the author included the l96l interlude with Filippa Rolf, the Swedish poet? When do you first become aware of her in the biography?

13. Can you explain the force of Vera Nabokov’s disdain for Pasternak’s Dr. Zhivago (p. 242-3)? Are you sympathetic with her sentiments?

14. What kind of childhood would you say Dmitri Nabokov had? On p. 209, his mother sends him instructions for the Lermontov translation his parents secure for him, assuring him that he can count on assistance at their end. What do you make of his having been groomed as family translator?

l5. Where is Vera Nabokov reflected in her husband’s work? And what does her life tell you about the creative process, and about the climate in which an artist creates?

l6. What do you make of Nabokov’s insistence on having his wife at his side at all times? Why did he want her there for interviews?

17. Schiff has chosen an old Russian proverb ("He likes like an eyewitness") as her epigraph to the last chapter. What is this quotation meant to signal to the reader?

18. By today’s standards Vera Nabokov was hardly a woman of great accomplishments. Nor did she grow up in a household in which women played visible professional roles. Do you think of her as having had a career? Or is she something of a disappointment, from a feminist point of view?

19. What do you learn about Nabokov the man from reading about his wife? Has your opinion of him changed?

20. Are you aware as you read of an overall shape of Vera Nabokov’s life, and of recurrent or overall themes in that life? Do you think all lives have themes?

Stacy Schiff is the author of Saint-Exupéry: A Biography. A recipient of fellowships from the Guggenheim Foundation and the National Endowment for the Humanities, she lives in New York City and in western Canada.
Learn More About Vera
print

Time to Be in Earnest

The Collected Autobiographies of Maya Angelou
Back to Top