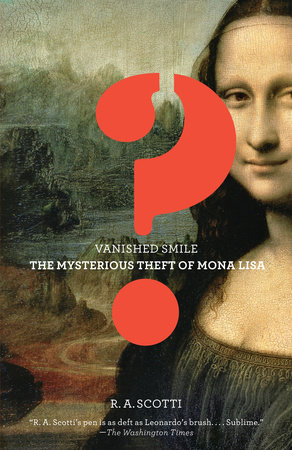 The introduction, questions, and suggestions for further reading that follow are designed to enhance your group’s discussion of R. A. Scotti’s fascinating investigation of the most audacious art theft in history.

On a sweltering day in August of 1911, the world’s most famous painting, Leonardo’s Mona Lisa, vanished from the Louvre. It was a crime so skillfully and stealthily executed that the theft would go unnoticed for several days. When it was noticed, all of Paris, and soon the entire world, went into shock, and then into mourning. The painting would be missing for two years. Who orchestrated this crime and for what reason remains shrouded in mystery, much like the painting itself.

In Vanished Smile, R. A. Scotti brilliantly reconstructs not only what is known about the theft, and the desperate attempts by Paris investigators to find the thieves, but also paints a fascinating portrait of the period. It was a turning point in the history of art, as young avant-garde painters and poets like Pablo Picasso and Guillaume Apollinaire sought to destroy the existing aesthetic order and replace it with radical forms of modernism. For Picasso, the Mona Lisa and the Louvre itself represented everything he was rebelling against. Indeed, Picasso and Apollinaire signed a manifesto threatening to burn down the great museum. Scotti shows that such attitudes, as well as harboring an actual art thief, made Apollinaire and Picasso prime suspects in the case, and landed the poet briefly in jail.

This period was also a turning point in the history of mass media, with news wires spreading stories around the world much more quickly than ever before and newspapers dramatically increasing their circulations. The theft of Mona Lisa became, almost instantly, a worldwide sensation, grabbing headlines for months and eclipsing stories about the tensions that would erupt in World War I only a few years later.

But the most vivid portrait Vanished Smile presents is of the painting itself, its mysterious power of enchantment, and its ability to drive men nearly mad with the longing for possession. Scotti observes that during the Renaissance, Mona Lisa was regarded primarily as a remarkable technical achievement, but that by the early nineteenth-century, the Romantics saw the painting as a tantalizing psychological puzzle—a sublime mixture of the real and the transcendent, Madonna and whore. “She has been derided as a femme fatale, an art fetish, and the queen of kitsch, and she goes on smiling, a picture of contained serenity, her mysteries intact, her secrets secure” [p. 227]. But when that mysterious smile vanished, thousands of Parisians crowded into the Louvre to view the empty space where it had hung. The outpouring of grief at its absence showed how deeply the public still valued the old masters—the Mona Lisa above all—even as the art world, led by Picasso, was moving inexorably beyond them.

Part detective story, part cultural history, Vanished Smile brings to life an extraordinary moment in the history of art and culture, casting new light on a mystery that still retains the power to intrigue one hundred years later.

1. What does Vanished Smile reveal about the art world in Europe in the early decades of the twentieth-century? In what ways was that world in the midst of momentous changes?

2. What are some of the most surprising facts about the Mona Lisa revealed in Vanished Smile? How does the painting’s remarkable history contribute to its current status?

3. How did Picasso, Apollinaire, and other avant-garde artists regard the Mona Lisa? Why were they so passionately opposed to museums like the Louvre? Does their critique of museums have merit today?

4. Scotti writes that “Apollinaire would call it ‘strange, incredible, tragic, and amusing all at once’ that he was the only person ever arrested in France for the theft of the Mona Lisa” [p.109]. Why was the poet/provocateur considered a prime suspect in the Mona Lisa‘s theft? How did public perceptions of his character, and his own radical views about art, help to implicate him? What effect did his arrest have on him?

5. Scotti shows that Peruggia’s stated motive for stealing the Mona Lisa—to restore her to her rightful place in Italy from which, he wrongly assumed, Napoleon had stolen her—was merely a cover for a money-making scheme. But the Louvre is filled with many great works that were plundered by Napoleon, and indeed many museums exhibit works of art that were either stolen or acquired in suspect transactions. Should museums be allowed to show and profit from works that were illegally or unethically acquired?

6. Why would thousands flock to the Louvre to view the empty space where the Mona Lisa had hung? How could the loss of a painting, even one as great as Mona Lisa, arouse such collective public grieving?

8. “If Mona Lisa is not the most beautiful, fashionable, or glamorous woman,” Scotti writes, “She is the most beguiling. . . . She touches without words, offering not a kiss or a caress but the anticipation. . . . If we try to look away, she follows us and will not let go” [p. 129-130]. What is it that makes the painting so “beguiling”?

9. Scotti writes that “To Renaissance artists, Mona Lisa represented an extraordinary technical achievement. To the Romantics she posed a tantalizing psychological puzzle”  [p. 67]. What might account for this dramatic change in how the Mona Lisa was viewed? Which is the more remarkable aspect of the painting, its technical mastery or its psychological depth?

10. Does Karl Decker’s story of how and why the Mona Lisa was stolen seem plausible? If not, what would motivate him to concoct such a story?

11. Why was the story of Mona Lisa’s theft such an international sensation? Why did it capture headlines around the world for so long?

12. What surprising aspects of Picasso’s character and aesthetic vision emerge from Vanished Smile?

13. Scotti writes that Mona Lisa is “both disconcertingly real and transcendent” [p. 127]. What other dichotomies does the painting seem to embody or reflect?

14. Near the end of the book, Scotti asks, “If Peruggia was not the lone thief and the marqués and his expert forger were fictions, the mystery remains: Who masterminded the theft and, even more puzzling, why?” [p. 212]. What are some possible answers to this intriguing question?

R. A. Scotti is the author of three previous works of nonfiction, including Basilica: The Splendor and the Scandal–Building St. Peter’s and Sudden Sea: The Great Hurricane of 1938, and four novels. She lives in New York City.

The Portrait of Dr. Gachet

Art and Revolution
Back to Top