Into the Ravine Teacher’s Guide 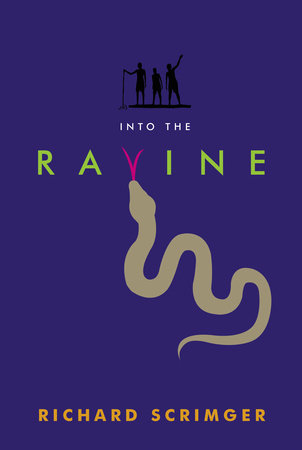 Into the Ravine Teacher’s Guide

print
Into the Ravine Teacher’s Guide

In the tar-melting heat of a suburban summer, three neighborhood boys who have lived side by side for most of their lives— chatty Jules, athletic and handsome Chris, and oddball Cory (he laughs at gravel and anticipates zombie attacks)—set off on an adventure. Behind their backyards is a ravine through which flows a modest river.
This familiar territory is by turns comforting and terrifying. When a tornado brings down a big maple tree, the boys make a raft of the
branches and set off downstream. After all, at thirteen they are old enough to take a day trip by themselves. On their way, the boys meet with a series of adventures that are funny at first glance but which resonate deeply. They rescue a diabolical dog, confront a hydrophobic gang, and survive a waterfall. They are bombarded by bicycles, hoodwinked by hobos, and bewitched by bikinis. By accident, they crash a funeral, and, by design, they crash a pool party— with tragic results.
Into the Ravine is a journey where the geography (urban blight and rural beauty) mirrors the contradictions of the human heart. Author Richard Scrimger draws on his powerful ability to tell a story that can truly make you laugh until you cry.

Richard Scrimger does not live deep in a ravine, but his written words rappel along the page with great finesse. His works extend
from picture books such as Bun Bun’s Birthday to other novels that feature an alien living in a boy’s nose (The Nose from Jupiter and A Nose for Adventure). Scrimger’s own adventures in parenting led to his writing a collection of articles compiled in Still Life With Children. His works have also been nominated for The City of Toronto Book Awards, as well as Silver Birch and Red Maple Awards. The Nose From Jupiter won the tenth Mr. Christie Book Award. His columns have been featured in The Globe & Mail, Chatelaine, and Today’s Parent magazines. Although Richard, who lives in Cobourg, Ontario, has now grown up, in many ways his wit and humor retain a childlike playfulness. As a reader, stay alert. His more serious undertones can sneak up on you.

ETHICS /CHARACTER DEVELOPMENT
What begins as a Saturday lark along a neighborhood creek becomes, at times, a show down between two factions of boys – The Rafters and The Bonesaws. Jules uses certain strategies to avert danger and outwit his opponents. How does he do this? If someone encounters a bully or threatening foe or group, what strategies do you suggest that they use? Cory opts for different strategies when he first meets Phil and his sidekicks. Do his strategies calm or inflame the situation? Explain why or why not.
When meeting Ernesto, a hobo in the ravine, Chris says “Povertyis not catching.” Explain how the initial viewpoints of Chris and Jules, with respect to Ernesto, seem to differ. The football players that Ernesto described treated him differently again. Why did Jules not feel proud about his feelings? In your communities, what services are available to help individuals or families that may be having difficulty making ends meet? Do you have suggestions as to how your class or school might do something to help?

MATH/SCIENCE
Jules, Chris, and Cory build a raft that carries them down the river through the ravine. Create a scale drawing and miniature
prototype of a raft that is able to float a weight of at least one gram. Be prepared to give reasons to justify the materials and
design that you used. The characters in the story used non-technical means of propelling their raft along the Highland Creek. How do their methods link to those used on the canals of Venice to this day? What devices in today’s boats are available to help avoid crashing into rocks or in identifying the depths of a waterway? On page 167, the characters discuss how vectors can help a climber. What is a vector?

HEALTH/NUTRITION
The main characters packed food with them for their river odyssey. Make a list of what they chose to bring. Does this collection of food encompass all the requirements of the Canada’s Food Guide? What food items would you recommend be added or exchanged to satisfy youths of their ages for a full day? Draw an outline of a backpack and label your food items inside it.

DRAMA
In role-playing scenes:
– conduct a police interview of the main characters after they have been discovered. What questions would you ask? Use
some of the questions from the story in your scene.
– evade a group of bullies.
– meet a girl/boy you really think is cute for the first time. Include your best relationship-starting lines.

VISUAL ARTS
The illustrator has chosen to use silhouettes of the three main characters on the cover and has repeated this motif to start
several chapters. Using contrasting colors or black, create a silhouette art work of one scene of the story. The illustrator also uses the tongue of a snake to form the letter “V” in “ravine” as the snake, Bonesaw, plays an important role in the story. Select one character or theme from the story that can be summed up in one word. Illustrate this word incorporating at least one drawn element that relates somehow to the story.

MEDIA LITERACY
On the author’s website, http://www.scrimger.ca, how are Richard Scrimger’s choice of text features on the introduction
appropriate? Explain your answer. Why do you think that Richard Scrimger has chosen to include a blog? How is blogging
different than writing a fictional story?

1. The book features a “not a preface” introduction and Chapter 31 rounds out the book even though Jules states, “I hate epilogues too.” Discuss the function, in general, of a preface and an epilogue.

2. On pages 44-45 and 205-206, the printing is somewhat off kilter. Have students find other pages where this option is used and discuss why might the author have chosen to do this.

3. Have students write a news report about an exciting part of the story (ie. discovering emeralds, launching the raft for the first time or getting off it for the last time, surviving leeches). Ask them to include key components – Who, What happened, Where, When, and Why it is an important news story to tell. Discuss and have them experiment with various forms of news reports: newspaper, a one-minute radio piece, or even a short videotaped news story.

4. Ask students to pretend to be the first on the scene to interview Jules, Chris, and Cory at the end of the story. What questions would they ask? How might the boys respond differently from each other? Divide students into small groups and have each gruop create a short scene to dramatize this.

5. Have students select one character and write a journal entry from the story, focusing on one specific moment. What thoughts or feelings might be included? Discuss their entries. How might Cory’s entry look compared to that of Jules or Chris?

6. Discuss Jules’ feelings with students. Do they think Jules is sad or happy about his journey? How does he view the ravine differently as the story progresses? Is he is excited about growing older? As them to explain why, giving evidence from the story.

7. Jules refers to many Greek characters. Why? Does Homer’s Odyssey have anything in common with Into the Ravine? Ask students to identify one character who is mentioned in the story and research the character’s background reference.

1. Before they read Into the Ravine, have students look at the cover and predict what elements the book might contain.

2. Richard Scrimger uses similes to help create more vivid images in his reader’s imaginations. Examples include (p.26) “The creek was as wide as a side street, the raft was as wide as a car. Ask students to create three similes to describe people they know – ie. My teacher is as smart as a whip. Note: similes can utilize like or as for comparison purposes.

3. Bonesaw, sidewalk – ask students what type of words these are. Create other examples.

4. Have students select two characters from the book and create a Venn diagram indicating how they are alike or different. Ask them which character they most identify with and to explain why.

5. Cory is a talented artist. Have students create a 10-cell cartoon strip highlighting key plot elements from the story.

6. Review chapter endings. Ask students to give examples of how the author paces the story to keep you turning the page.

Learn More About Into the Ravine
print

Sir Callie and the Champions of Helston
Esme Symes-Smith