A Pigeon and a Boy Reader’s Guide 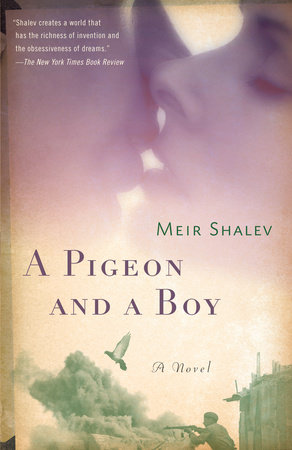 A Pigeon and a Boy Reader’s Guide

print
A Pigeon and a Boy Reader’s Guide

From the internationally acclaimed Israeli writer Meir Shalev comes a mesmerizing novel of two love stories, separated by half a century but connected by one enchanting act of devotion.

During the 1948 War of Independence—a time when pigeons are still used to deliver battlefield messages—a gifted young pigeon handler is mortally wounded. In the moments before his death, he dispatches one last pigeon. The bird is carrying his extraordinary gift to the girl he has loved since adolescence. Intertwined with this story is the contemporary tale of Yair Mendelsohn, who has his own legacy from the 1948 war. Yair is a tour guide specializing in bird-watching trips who, in middle age, falls in love again with a childhood girlfriend. His growing passion for her, along with a gift from his mother on her deathbed, becomes the key to a life he thought no longer possible.

Unforgettable in both its particulars and its sweep, A Pigeon and A Boy is a tale of lovers then and now—of how deeply we love, of what home is, and why we, like pigeons trained to fly in one direction only, must eventually return to it. In a voice that is at once playful, wise, and altogether beguiling, Meir Shalev tells a story as universal as war and as intimate as a winged declaration of love.

1. We enter A Pigeon and a Boy in the middle of a story. First we hear the words of the old Palmach fighter, who speaks as a witness to a historical moment, and then Yair, the narrator, adds to the story the emotional experience of the pigeon. Did you find this an effective opening? How did it draw you into the story, or keep you distanced from it?

2. What is the importance of occupations in the novel: Liora’s business, Tirzah’s contractor work, Yordad’s doctoring, Yair’s role as a tour guide and driver? What does their work say about how each character approaches his or her life?

3. The act of naming is essential to how we see one another and to the relationships we claim for ourselves. Yair’s family calls Yaacov "Yordad"; Yordad calls Yair "Yairi," meaning "my Yair"; Tirzah calls her father "Meshulam"; Meshulam calls Yair and Tirzah "Iraleh and Tiraleh." How do you think these choices affect both those who are named and those who are naming?

4. What do you make of Meshulam’s role in the novel? How is his presence like and unlike that of Dr. Laufer, whose actions help direct the fate of the Girl and the Baby—as Meshulam attempts to encourage Tirzah and Yair to have a life together?

5. The necessity of a house that responds and belongs to the person inside it is essential to Raya and, in turn, to Yair. How important is the idea of home to the other character—to Benjamin, Yordad, Tirzah, Meshulam, Dr. Laufer? What is your own definition of home?

6. There are elements of magical realism in the novel, specifically when the pigeons speak—once to Raya and once to Yair. What is the effect of these conversations? What is the significance of the pigeons’ words? Why do you think Raya and Yair react in such dramatically different ways? Yair’s experiences of the world are so tied to his mother’s—when she is pregnant, he gets sick as well—yet he cannot bear to have pigeons in his house or to deal with them in any way. What does his violence against the pigeon in the end suggest about his connection to his mother?

7. The presence of cranes creates a contrast to the homing pigeons. For Yair, cranes mark the beginning and the return of Liora to his life; while for Raya, pigeons define the beginning and the end of the Baby’s life. What do you make of the role of the different birds in the novel, and what do they symbolize?

8. To make decisions, Raya and Yair both compile lists FOR and AGAINST. Yordad classifies the world, dividing it up into parts and working to fix what is broken. What does this difference suggest about the divide between Raya and Yordad? Do you recognize your own way of making decisions in either approach?

10. The novel explores in intricate and moving passages the ways in which faith and destiny determine our lives—from the pigeon landing on the Girl’s balcony to Meshulam bringing his sick son to Yordad’s offices. Yair speaks often about fate and how others predict his story, and also speaks of his own passive character traits: "I am a kite whose string has severed. . . . I settle for hopes and wishes, in the manner of the devout in prayer; like a hammer that pounds again and again on the same spot." What do you think the novel suggests about the role of destiny, and about the importance of our own choices to determine our fate?

11. Speaking to Yordad after he returns from medical school, and after the Baby’s death, Raya says to him: "Funny, how Dr. Laufer determined all of our fates. Yours, mine, my baby that lives, and my Baby who died." Dr. Laufer, like Meshulam, is a figure of utmost importance, yet one who remains in the background of the story. What do you make of his character, and of his role in the fate of Raya, her love, and her family?

12. Yair often remarks on how different he is from his brother, though both were raised by Yordad as his sons. What does the novel suggest about what is inherited and what can be given?

13. How does the novel explore the ways in which we mourn our dead? Is Yair’s narration a way of mourning his mother? What do you make of Meshulam sleeping in his son, Gershon’s, bed after his death?

14. When Yordad returns to Raya, he states that he believes souls can be fixed. What does the novel suggest about the ability of people to fix their souls and their lives? Do you think Raya is ever able to love Yordad?

15. At the heart of the novel is the idea of story: that we exist as part of a story, both our own and that of others. Raya asks her son, "Do you understand what every person needs?" and Yair replies, "A story." What do you think the novel says about why stories are essential to our existence and about what it means to claim a story as your own—and, additionally, that every story we tell is more about us than it can be about any other person figuring in the story?

16. This question of story relates very intimately to the act of writing and reading. In creating this novel, the author had an array of narrative choices. What do you think of Shalev’s choice of a first-person narrator who speaks to "you" (his mother), as well as to us, the readers? Is Yair a trustworthy narrator? And how do our own personal experiences—of love, family, loss—affect our reaction to the novel?

17. Yair remarks frequently how his mother greets houses: "Hello, house." Liora, lying with Yair at his house, says, "Hello, you," and Yair’s "body breathes and responds." What do you think is similar and different about Yair’s love and connection to the women and houses in his life: his mother and their home; Tirzah and the house she builds for him; and Liora and the apartment they own? Why do you think Yair chooses to go back to Liora in the end, to show her the house that has been created wholly without her?

18. Only the last chapter in the novel is named, instead of numbered. Why do you think the author chose to name it, and to include a summary of what happens to the characters after Yair’s narration ends? How does the inclusion of this final chapter relate to your experience of the novel as a whole? Do you appreciate hearing what happens to the characters, or is it disruptive to the narrative voice?

Meir Shalev was born in 1948 on Nahalal, Israel’s first moshav, and is one of Israel’s most celebrated novelists. His books have been translated into more than twenty languages and have been best sellers in Israel, Holland, and Germany. In 1999 the author was awarded the Juliet Club Prize (Italy). He has also received the Prime Minister’s Prize (Israel), the Chiavari (Italy), the Entomological Prize (Israel), the WIZO Prize (France, Israel, and Italy), and for A Pigeon and a Boy, the Brenner Prize, Israel’s highest literary recognition. A columnist for the Israeli daily Yedioth Ahronoth, Shalev lives in Jerusalem and in northern Israel with his wife and children.

The Little Red Guard
Back to Top