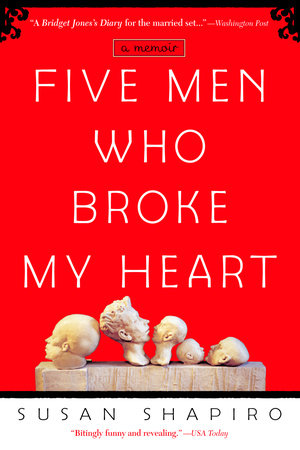 For any woman who has ever wondered what happened to an old flame (or a roaring blaze of them), Five Men Who Broke My Heart offers a hilarious, fiercely frank account of a journalist who did just that. Daring not only to track down her former boyfriends but to find out what really went wrong in each relationship, Susan Shapiro examines a lifetime of love, from age thirteen to thirty-five, and weaves a marvelous memoir from the experience.

The quest began when Susan found herself in an early midlife crisis during what she called her “no-book-no-baby” summer. Her career as a freelance writer was successful, but she had yet to snag a lucrative book contract. Her five-year marriage to Aaron, a workaholic comedy writer, had not resulted in children. Then she got a call from Brad, a.k.a. Mr. Studrocket. It had been a decade since their college romance, and now he wanted Susan to help publicize his new pop-science book. Their reunion makes her want to see all the men from her past, a trek that leads her to discover that in spite of their infidelity, immaturity, and insensitivity, her exes were not entirely to blame for her series of humiliating breakups. Writing candidly of laugh-out-loud foibles and bittersweet what-ifs, she takes us on a mesmerizing tour of the heart.

The questions and discussion topics that follow are intended to enhance your reading of Susan Shapiro’s Five Men Who Broke My Heart. We hope they will enrich your experience of this sparkling memoir.

1. Brad’s call sparks a host of reactions in Susan–professional insecurity, nostalgia for the past, and a rekindled attraction. How does the reality of Brad measure up to her memories of him? What does their reunion indicate about the nature of a "good match?"

2. Susan’s friendship with Claire is a constant throughout the memoir; her shoes almost serve as bookends around the first and last chapters. Are the traits of a lasting friendship the same as those for a lasting romance? Is it realistic to expect husbands to respond like best friends?

3. Was George, the theater professor, a suitable bridge between Brad and marriage? Or did George only reduce the likelihood that Susan would commit to Aaron?

4. Tom, the Robert Redford of Susan’s campus, was one of the few suitors her family liked. Are relatives good barometers of matchmaking? Did cross-country distance enhance or defeat Susan’s relationship with Tom?

5. Chapter Five ends with several philosophical quotes about love, including Aaron’s assertion that "you marry your dark side" and Iris Murdoch proposing that "being married is the best possible way of being alone." Susan also wonders whether her self-sufficiency made her attractive to Aaron. Do you agree with the assertions in those two quotes?

6. What did Richard and his dog teach Susan when she lived with them? Had Richard become more honest by the time they reunited?

7. David writes that Susan viewed him as "just another commodity to be dealt with" and sends a stinging assessment of her attitude toward men. To what do you attribute his perception? Is it ever possible to uncover the facts of a love story?

8. Which of Susan’s five ex-boyfriends is the most appealing to you?

9. In the initial portions of Five Men Who Broke My Heart, Susan feels that her life is mediocre compared to that of her siblings and friends. What measure of personal achievement–parental, professional, financial, or otherwise–bears the most significance in your family or community?

10. How does Claire’s romantic history compare to Susan’s? What do you think might account for the differences and similarities?

11. Discuss the presence of New York as a backdrop in Susan’s adult life. What makes it the right place for her now? What is it like for her to journey home? Are these contrasting landscapes significant in terms of how her life unfolded?

12. How would you characterize the storytelling voice of this memoir: humorous, tragic, or something else altogether? What devices as a reporter and book reviewer served Susan well in crafting Five Men Who Broke My Heart? If the book weren’t identified as a memoir, would you have called it a novel?

13. Do Susan’s five exes reflect any sort of evolution in terms of her emotional growth?

14. If her family applied its penchant for diagnosis to Susan’s love life, what terminology would they probably use? What would be the prognosis?

15. Did the men in Susan’s family influence her expectations of men later in life? Do Susan and her mother share any common approaches to being a wife?

16. If you were to produce a love chart like the one provided in Chapter Fifteen, what would it look like? Would you be able to construct one from memory, or would interviews and fact-checking be necessary?

17. Aaron and Susan are both professional wordsmiths, but they work in quite different aspects of the industry. What do their varied audiences and attitudes toward work reflect about their personalities?

18. The memoir concludes with several powerful images, including the birthday gift that induces Susan to become more technologically independent, and the visit that makes her realize her aging parents are becoming less independent. What snapshot of love is shared in these passages?

19. The therapist Dr. G. tells Susan: "Love doesn’t make you happy. Make yourself happy." Why is this the most important advice of the book?

20. Can you find similarities in Susan’s connections with her family and her connections to each of the five men? Have the loves in your life recreated relationships with any of your relatives?

21. With each of the five men, Susan is surprised to discover places she screwed up in each relationship. Can you pinpoint what her mistakes were? In breakups, why is it more interesting and important to be self-critical than to play victim?

22. Susan didn’t marry Aaron until she was thirty-five, the age that the poet Rilke recommended writers wed. What are the benefits of waiting to marry?

Learn More About Five Men Who Broke My Heart
print

Mister Owita’s Guide to Gardening
Back to Top