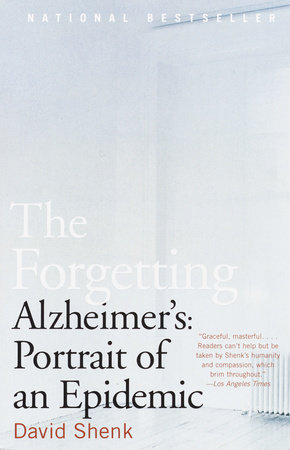 "Riveting. . . . Superb. . . . A must-read for anyone interested in the wretched ailment that is Alzheimer’s Disease." —San Francisco Chronicle Book Review

The introduction, discussion questions, and author biography that follow are intended to enhance your group’s reading of David Shenk’s The Forgetting—an engaging account of the disease that afflicts nearly half of all persons over the age of eighty-five, robbing its victims and devastating their loved ones.

David Shenk’s The Forgetting is one of those rare books that manages to be about nearly everything at the same time that it sharply illuminates a single topic, in this case, Alzheimer’s disease. Yet it does not ignore the fascinating issues uncovered along the way, such as the structure of memory and the surprising benefits of forgetting, the meaning of “disease,” the biology of aging, and how death fits into evolution.

By drawing so eloquently from so many aspects of our shared humanity, Shenk’s book documents the loss of that humanity faced by people with Alzheimer’s, and at the same time takes us through the exhilarating achievements and frustrating setbacks of a scientific community committed to understanding, and eradicating, this terrible form of dementia. Along the way it invites us to ponder numerous ethical and philosophical questions.

1. What is the difference between a healthy brain and a sick one?

2. What comparisons might be made between early childhood development and Alzheimer’s?

3. By what processes—historic, scientific, semantic, cultural—have certain forms of dementia come to be known as Alzheimer’s?

4. By holding the story of Ralph Waldo Emerson’s mental decline in a light cast by the story of the molecular biology community’s efforts to combat Alzheimer’s, Shenk’s prologue illustrates the principal juxtaposition that frames The Forgetting. And by including in that prologue not only an excerpt from Emerson’s poem “Brahma” but a reference to the Barbara Walters/Monica Lewinsky interview that coincided with the keynote address of the Molecular Mechanisms in Alzheimer’s Disease conference, Shenk prepares his reader for the broad scope of the rest of his book, a book as likely to quote from Plato or Shakespeare as to refer to The New England Journal of Medicine and gaze at William de Kooning’s paintings. Why do you suppose Shenk elected to work with such a broad canvas?

5. Plato "insisted that those suffering from ‘the influence of extreme old age’ should be excused from the commission of the crimes of sacrilege, treachery, and treason." Keeping in mind that Plato was talking about people suffering the influence of old age, but keeping in mind as well that the onset of Alzheimer’s is gradual and often undiagnosed, do you feel that old age alone should be a mitigating factor in any other crimes? Would you take this a step further and argue that society should make a legal distinction for elderly people, jut as it does for juveniles?

6. "We are the sum of our memories. Everything we know, everything we perceive, every movement we make is shaped by them." Despite the truth of Shenk’s statement, most people go through their daily lives entirely unmindful, if not unaware, of the role played by memory in their behavior. Try to articulate the ways in which your memories have made you what and who you are.

7. Short of medical treatment, what options would you like to see available for people who learn that they have early Alzheimer’s? How would you plan for your future and the future of you family if you were to become one of those people?

8. Shenk writes of Alzheimer’s patients and their families struggling to create meaning out of their loss. Do you think that such meaning exists? Do you, too, desire to find meaning in suffering?

9. Should the government continue to allow Alzheimer’s patients to give away all assets to their children in order to qualify for government-sponsored care?

10. Nonfiction books can be as suspenseful as novels. Discuss the ways in which Shenk achieves suspense in The Forgetting.

11. Are you encouraged or discouraged by the advances that have been made in our understanding of Alzheimer’s over the past century?

12. Many of us are caregivers to Alzheimer’s patients. Discuss Shenk’s proposal that "the caregiver’s challenge is to escape the medical confines of disease and to assemble a new humanity."

David Shenk is the author of Data Smog, which The New York Times hailed as an “indispensable guide to the big picture of technology’s cultural impact.” A former fellow at the Freedom Forum Media Studies Center at Columbia University, he has written for Harper’s, Wired, Salon, The New Republic, The Washington Post, and The New Yorker, and is an occasional commentator for NPR’s “All Things Considered.” He lives in Brooklyn, New York.
Learn More About The Forgetting
print

Falling Into the Fire

Beautiful Trauma
Back to Top