Once on a Moonless Night Reader’s Guide 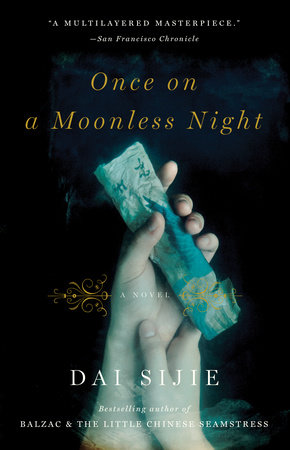 Once on a Moonless Night Reader’s Guide

print
Once on a Moonless Night Reader’s Guide

The questions, discussion topics, and reading list that follow are intended to enhance your reading group’s discussion of Once on a Moonless Night, Dai Sijie’s haunting tale of love and of the beguiling power of a lost language.

“[a] strange and beautiful novel….[Dai] has an outrageously fertile imagination and a fine instinct for absurdist tragicomedy….The euphonious sounds of the prose (gracefully translated from the French by Adriana Hunter), together with the sensory impressions they unleash, reinforce the book’s message that language can offer mesmerizing pleasures.”
- New York Times Book Review

When Puyi, the last emperor, was exiled to Manchuria in the early 1930s, it is said that he carried an eight-hundred-year-old silk scroll inscribed with a lost sutra composed by the Buddha. Eventually the scroll would be sold illicitly to an eccentric French linguist named Paul d’Ampère, in a transaction that would land him in prison, where he would devote his life to studying the ineffably beautiful ancient language of the forgotten text.

Our unnamed narrator, a Western student in China in the 1970s, hears this story from the greengrocer Tumchooq-his name the same as that of the language in which the scroll is written-who has recently returned from three years of reeducation. She will come again and again to Tumchooq’s shop near the gates of the Forbidden City, drawn by the young man and his stories of an estranged father. But when d’Ampère is killed in prison, Tumchooq disappears, abandoning the narrator, now pregnant with his child. And it is she, going in search of her lost love, who will at last find the missing scroll and discover the truth of the Buddha’s lesson that begins “Once on a moonless night . . .” in this story that carries us across the breadth of China’s past, the myth and the reality.

1. What is this book about? What are Dai’s major themes?

2. Who is the narrator? What do we know about her? Do you like her?

3. On pages 31-32, Professor Tang Li describes Puyi’s fascination with an ancient language made up purely of nouns: “No verbs, therefore no concerns.” What does this mean? Why did Puyi conflate verbs with concerns?

4. Discuss the role of language itself throughout the novel. Why does it hold such power for Paul d’Ampère? For Tumchooq? For the narrator?

5. The narrator states that filial love “lies at the heart of the Chinese moral code” (p. 59). Why is this significant?

6. How does the murder of White-Tuft change the course of the novel?

7. Why does Tumchooq tell the story of Mr. Liu (pp. 82-85)? What message is he trying to convey to the narrator? Why is Mr. Liu so important to him?

8. Discuss the incident with Ma at the Exhibition of Ancient Chinese Punishments and Tortures. Why did Tumchooq do what he did? And why does he tell the story the way he does? What does this scene say about truth and deception?

9. Is there such a thing as a true friend in this novel? What about Hu Feng?

10. How are women treated in the novel? Why aren’t the narrator and Tumchooq’s mother identified by name?

12. Why does Paul d’Ampère turn his back on France? Does the narrator? How does pride of country affect the events in the novel?

13. Reread Tumchooq’s letter on page 175. Why does his father’s death affect him so deeply?

14. Discuss the notion of choice. How does Dai distinguish “choice” from “decision”?

15. On pages 197-198, Mr. Tarakesa tells the narrator that d’Ampère couldn’t find the scroll because he was a Westerner, that “finding the end of a teaching like that requires an entirely oriental mind.” Why is the narrator so taken aback? Where else does bigotry come into play? In this novel, does it work both ways?

16. Do you agree with the narrator’s assertion, on page 202, that “in literature there is just one true masterpiece to which different writers give a particular form”? Do you think Dai agrees?

17. What is signified by d’Ampère’s blank headstone? Do you agree with Tumchooq’s interpretation on page 230?

18. Discuss the epilogue. What does it mean that Peking has changed so thoroughly?

20. Reread the end of the sutra, the last lines of the novel. What is the significance?

21. Did the ending satisfy you? Why or why not?

Born in China in 1954, Dai Sijie is a filmmaker and novelist. The author of the international best seller Balzac and the Little Chinese Seamstress and Mr. Muo’s Travelling Couch, he left China in 1984 for France, where he now lives and works.

The Travels of Marco Polo; Fortress Besieged by Qian Zhongshu; One Hundred Years of Solitude by Gabriel García Márquez; The Catcher in the Rye by J. D. Salinger; Heart of Darkness by Joseph Conrad; The Gulag Archipelago by Aleksandr Solzhenitsyn
Learn More About Once on a Moonless Night
print

In the Land of No Right Angles