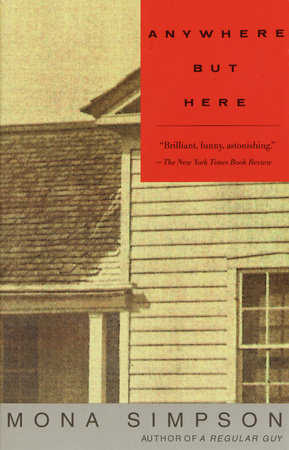 The questions, discussion topics, and author biography that follow are designed to enhance your group’s reading of Mona Simpson’s novel Anywhere But Here. We hope that they will provide you with new ways of looking at a novel produced by an American realist hailed by critics as one of her generation’s finest writers. With this work, Mona Simpson shows herself to be a sensitive and incisive analyst of the broken family, with an uncommon insight into the child who is at the mercy of parents who are absent, restless, narcissistic, dishonest or emotionally unstable. While it engages serious contemporary social issues, this work also makes for compulsive and deeply enjoyable reading, with characters who absorb our attention and involve us completely in their world.

Mona Simpson’s ambitious first novel Anywhere But Here became a national bestseller upon its publication in 1987. It traces the difficult childhood and coming-of-age of Ann August, the daughter of a woman whose quest for the American dream moves the two of them from Wisconsin to California and from one odd situation to another, with Ann at the mercy of her mother’s strange whims. Ann has inherited the rich black hair of her Egyptian father, who left when she was little. Her mother, Adele, insists it is her hair that makes her special–"cuter than Buffy" on A Family Affair–and that might make her a successful child television star. One day Adele decides to leave her second husband, Ted, and taking his Lincoln Continental and his gasoline credit card, she sets off with ten-year-old Ann for Los Angeles.

Ann is an unusually attentive and observant child who reflects ruefully on the life she leads with her mother. Left behind in Wisconsin are the two people Ann loves best in the world: her grandmother Lillian and her cousin Benny. Adele is at the center of Ann’s troubles: always hoping to get rich, to get married again, to have a more comfortable life, she takes an apartment in Beverly Hills that she cannot afford to furnish. Here they try to appear normal among the rich and fashionable while Adele dates wealthy men, spends too much on clothes, fails to pay the bills, and bounces checks. Lending depth and context to the story of Adele and Ann are narratives by Adele’s mother, Lillian, and her sister Carol.

Adele and Ann are unique and powerful characters, fully created, who linger long in the reader’s mind. Mona Simpson says about Anywhere But Here, "The book is about roots and the people who went west and tried to get more from life, because that seems to me the story of life in America…. Adele is unstable, but troubled by American troubles: by the striving for gentility, the striving for a higher station. I wanted her dreams to be what got her into trouble." (Contemporary Literary Criticism, vol. 44, p. 97.)

1. The opening of Anywhere But Here shows Ann and her mother in a wrenching scene of abandonment and reconciliation. How does this episode reverberate throughout the novel? What happens when Ann decides she doesn’t want her mother to come back for her?

2. The novel centers upon a mother-daughter relationship that is often painful, sometimes even violent, yet often loving as well. What is at stake in Ann’s fights with her mother? How are love and hatred bound together here? What is distorted about the roles of mother and daughter? Later in the novel Adele begins to threaten suicide; what part does this behavior play in the ongoing struggle between Ann and Adele?

3. Anywhere But Here explores the role of family roots, rootedness, and uprooting in contemporary American life. Is there a qualitative difference between the lives of Ann and Adele, who left home, and the lives of those they left behind? Are those who leave necessarily the more ambitious and adventurous ones? Do you see the passivity that seems to be characteristic of both Lillian and Carol as a reflection of or as a reason for their rootedness?

4. Who is the ideal parent in the novel and why? Is Adele the sort of person who should not have become a parent? Is there anything positive about Adele as a mother? What role do fathers play in the novel?

5. Why does Simpson avoid giving Adele a speaking part until the end of the book? What is the effect of the first-person narratives of Lillian and Carol? Do you think these provide a useful perspective on Ann’s story, or that the narrative might have been better spoken entirely by Ann?

6. Mona Simpson has said that in the beginning of her work on this novel she disliked Adele, but developed a kind of affection for her as the work went forward. How do you feel about Adele? What might be at the root of her spectacularly poor judgment? What are we able to learn about her own emotional history, her own childhood?

7. How does the novel portray sex for women and girls? What role does sexuality play in the lives of each of the four main female characters–Lillian, Adele, Carol and Ann? Why do you think Ann wants to take nude photographs of other children? Does Ann’s upbringing affect her ability to love?

8. Adele spends large amounts of money on expensive clothes that she can’t afford in the belief that her physical attractiveness is necessary for getting Ann "a new daddy." What is the place of material objects like clothes and cars in Adele’s sense of who she is? Is this a trait she passes on to Ann?

9. Apart from her grandmother, Ann’s closest and most secure relationship is with her cousin Benny. How does Ben’s death impact upon Ann’s life? What do you find strange about the description of the family’s gathering for the funeral visit?

10. How does food–especially ice cream–figure in the relationship between mother and daughter? Consider the place of food in Ann’s visit to her mother near the end of the book: why does Adele have so much food in the house? Why does Simpson include the detail of the ants on the carrot cake?

11. As noted earlier, Simpson has decided to save Adele’s narrative for the end of the novel. We have previously seen her through the eyes of her daughter, her sister, and her mother. Does this final section change your perspective on her in any way? Adele tells us that she has learned to feel better about herself through "The Course of Miracles," a popular self-help program (533). What does this section suggest about Simpson’s view of the current state of spirituality and moral self-examination in our culture?

12. Is there such a thing as "home" in Anywhere But Here? What would you say is the difference, symbolically, between Wisconsin and California in the novel? Is life shaped by place and social context as much as by one’s parents and upbringing? What is most unmistakably American about the novel?