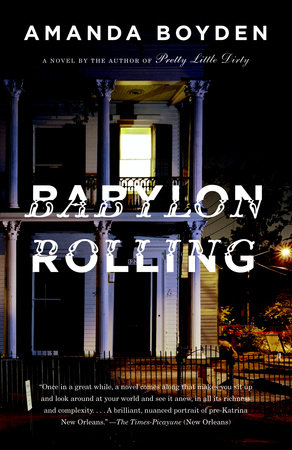 “Once in a great while, a novel comes along that makes you sit up and look around at your world and see it anew, in all its richness and complexity. . . . A brilliant, nuanced portrait of pre-Katrina New Orleans.”
—The Times-Picayune

The introduction, questions, and suggestions for further reading that follow are designed to enliven your group’s discussion of Babylon Rolling by Amanda Boyden.

Amanda Boyden’s Babylon Rolling is the tale of five families who call the same New Orleans street home. The residents’ lives overlap and collide over the course of a year, from summer 2004 to summer 2005. Through their voices, we hear a heartbreaking story of conflicting dreams and desires, of racism in America, and of a city poised on the edge of disaster.

1. Describe the structure of Babylon Rolling. Though the novel moves forward chronologically, the story jumps from one family to another. Why do you think the author chose a third-person narration with varying voices for each family? Was there ever a moment when you were surprised to learn which character was narrating? If so, why do you think the author would choose ambiguity over clarity. How are the prologue and the epilogue set apart from the rest of the text?

2. Why do you think the author chose Babylon Rolling as the title, and how does it embody the tone and atmosphere of the novel? What does the title signify?

4. Discuss the five families residing on Orchid Street and the various tensions within each house. How are the needs, desires, and tensions in each house different from their neighbors’?

5. During the year, their first full year in New Orleans, what happens to Ariel and Ed’s marriage? Why is it falling apart? What brings them together in the end?

6. Describe the other marriages in the novel, and compare and contrast them to Ariel and Ed’s. Compare the relationship of longtime married residents Cerise and Roy to that of Philomenia and Joe. What makes one so successful and happy, and the other not?

7. Explore and discuss the theme of companionship in Babylon Rolling. Does Ariel have any female friends? Why is this important to the novel? Describe how her anger seems to subside when she calls and befriends Sharon Harris. How about Philomenia? Does she have any friends, male or female? Discuss the friendship that develops between their husbands, Ed and Joe. How is this male friendship crucial to the novel? Also discuss how companionship is important for all the families in the novel.

8. Why does Ariel betray Ed? What other betrayals occur in the novel? Does Fearius betray his family? How about Philomenia and Joe? Who’s betraying whom in their relationship? How about Ed’s daily visit to the bar? Is he betraying his children? And what about Shane and Philomenia? Is there a trust between them that it broken? Are any of the betrayals justified?

9. Discuss the theme of forgiveness in Babylon Rolling. Who asks for forgiveness? Who gives it? And who do you think deserves it? If you were in any of the characters’ situations, would you be able to forgive?

10. What happens to Fearius over the course of the year? How does the author make him a sympathetic character despite his flaws?

11. What kind of mother is Ariel? Describe the other mothers in the novel—Sharon, her daughters, Cerise, Marie, Indira. Do you think being a mother defines any of them? What sorts of relationships does each have with their children?

12. On the flip side, what kind of father is Ed? Does this change over the course of the novel? Do you think being a father defines him? How about the other fathers in the novel?

13. Food and cooking is crucial to this novel. Can you remember any descriptions of food? Why does Ed eat the Browns’ food after the accident with the grill? How is baking and cooking therapeutic for Philomenia? How is it also her downfall?

14. There are a number of accidents and illnesses on Orchid Street during the year. how do the illnesses (Joe’s cancer, Philomenia’s disease) and the accidents at the beginning and the end of Babylon Rolling both divide and unite the neighbors on the street?

Born in Northern Minnesota, Amanda Boyden grew up, the eldest of three daughters, in Chicago and St. Louis. Currently she teaches in the English department of the University of New Orleans. Previous positions include elderly companion, artist’s model, gutter cleaner, dishwasher, science lab assistant, cancan dancer, tutor, stuntwoman, and bit part actress. Until recently, Amanda worked as a contortionist and professional trapeze artist. She proudly lists hanging high over the heads of Galactic and 311 in her life accomplishments. She is married to Canadian author Joseph Boyden. Her first novel, Pretty Little Dirty was published in 2006.