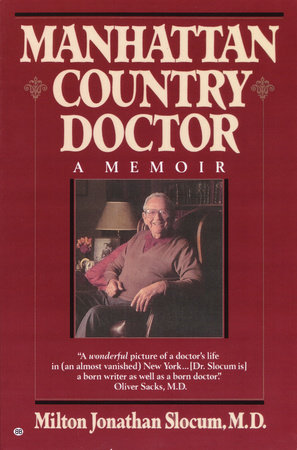 “A wonderful picture of a doctor’s life in (an almost vanished) New York.”—Oliver Sacks

In the middle of the Depression, when the West Side of Manhattan was a small town of its own, the young Milton Slocum, MD, and his wife, Belle, set up general practice in New York City’s notorious Hell’s Kitchen.

Available around the clock for every medical emergency, Dr. Slocum tended to a vivid cast of real-life characters—mobsters, theater people, Old World families, boxers, and others—who became his good friends as well as his patients. Dr. Slocum’s tales of his thiry-year Manhattan practice—many heartwarming or hilarious, others poignant reminders of the difficulties of the Depression and the dearth of medical advances—recall life “way back when,” when corner drugstores sold leeches, the local candy store doubled as a telephone message center, the shoeshine stand was a bookie joint, and where the neighborhood women cushioned their elbows with brightly colored pillows as they leaned out of the windows to chat with passersby.

Manhattan Country Doctor is a moving, nostalgic account of medicine as science and art, of a colorful neighborhood in turbulent times, and of a man who exemplified the traditional image of the country doctor amid the teeming brownstones of New York City.

“Slocum won me over. The doctor has a deadpan humanism that allows the story to tell itself. . . . Tough, clear-eyed, idiosyncratic and fiercely honest, an original who animadverts on miserly patients, egocentric doctors, psychoanalysis and lucky Luciano with evenhanded fervor.”—The New York Times Books Review