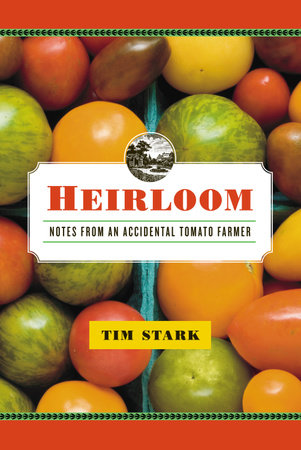 Notes from an Accidental Tomato Farmer

Situated beautifully at the intersection of Michael Pollan, Ruth Reichl, and Barbara Kingsolver, Heirloom is an inspiring, elegiac, and gorgeously written memoir about rediscovering an older and still vital way of life.

Fourteen years ago, Tim Stark was living in Brooklyn, working days as a management consultant, and writing unpublished short stories by night. One evening, chancing upon a Dumpster full of discarded lumber, he carried the lumber home and built a germination rack for thousands of heirloom tomato seedlings. His crop soon outgrew the brownstone in which it had sprouted, forcing him to cart the seedlings to his family’s farm in Pennsylvania, where they were transplanted into the ground by hand. When favorable weather brought in a bumper crop, Tim hauled his unusual tomatoes to New York City’s Union Square Greenmarket, at a time when the tomato was unanimously red. The rest is history. Today, Eckerton Hill Farm does a booming trade in heirloom tomatoes and obscure chile peppers. Tim’s tomatoes are featured on the menus of New York City’s most demanding chefs and have even made the cover of Gourmet magazine.

TIM STARK is the proprietor of Eckerton Hill Farm in Lenhartsville, Pennsylvania. His writing has appeared on National Public Radio as well as in Gourmet, Condé Nast Traveler, Washington Post, Missouri Review, Alimentum, and Organic Gardening. Tim and his farm… More about Tim Stark

"Lovingly crafted memoir about the author’s days producing organic veggies on his small farm in Pennsylvania Dutch country. Stark’s Eckerton Hill Farm provides fruits and vegetables for a discerning retail clientele at New York’s Union Square Greenmarket. The author also delights the palates of sophisticated foodies via the kitchens of the great chefs at Gotham’s priciest eateries. Readers get an introduction to regular farmer’s market customers and sellers and a field guide to the practices of Stark’s affable Amish and Mennonite neighbors. Other aspects of the author’s cultivation surface in references to diverse literary sources from Cheever to Crèvecoeur. It all combines to make entertaining light fare. A fresh writer’s salad garnished with an colorful dressing for foodies with a yen for sensual comestibles." —Kirkus Reviews

"Fourteen years ago, with zero farming experience, Tim Stark started 3,000 heirloom tomato plants in his Brooklyn apartment then transferred them to the family acreage in Pennsylvania. The multi-colored fruit of his labor…were a hit, snapped up by amateur and pro chefs at NYC’s greenmarket. With succulent wit, he conveys the poetry of a well-grown tomato." —Entertainment Weekly

"In a “back-to-nature” move more than a decade ago, Stark uprooted a handful of heirloom tomato seedlings from his Brooklyn brownstone and returned to Eckerton Hill, his Pennsylvanian boyhood home, to harvest two acres of multicolored oddities. With his produce and dogged perseverance, Stark bridges the gap between New York’s posh kitchens and the sun-drenched fields of the rural countryside, commenting along the way on buzzwords like organic, the effects of urban sprawl, and farming’s changing landscape. His recounting of fly-by-night agricultural tactics, stomach-turning worries and relief-inducing bumper crops paints a poignant picture of a dwindling form of American life. Through his urbane relationships with the Bouleys and Bouluds and pastoral friendships with the likes of fellow berry, pea shoot and haricot vert producers, he illustrates the unlikely bond between the tomato-laden farm and the urban table." —Publishers Weekly


"Get a down-to-earth look at the farm fresh fad in this delicious and revealing memoir from a greenmarket superstar whose famous tomatoes are coveted by top chefs." —Good Housekeeping

“Like a vine-ripened tomato still warm from the sun, Heirloom is a most satisfying experience. Tim Stark is a natural-born storyteller—funny, poignant, and unerringly authentic. Charming with a capital C.”
—John Grogan, author of Marley & Me and former editor of Organic Gardening

“Every year, Tim Stark’s gorgeous tomatoes serve as the sign that summer has arrived. Tim has put as much craft into this book as he puts into his annual harvests.”
—Daniel Boulud, Chef / Restaurateur

“Tim Stark is the poet laureate of the nightshade and of Eastern Pennsylvania; his tomatoes and peppers burst on the mind’s palate as his native landscape comes to shaley, fecund life under his hands. Heirloom is clearly descended from Montaigne and M. F. K. Fisher; it takes its place grandly among the literature of passionate obsessives.”
—Kate Christensen, author of The Great Man

“This is the Tim Stark I’ve known for more than a decade: one-fourth farmer, one-fourth storyteller, and half mad. He tells it like it is.”
—Dave Pasternack, Chef / Owner of Esca and author of The Young Man and the Sea

“Successful farming in the twenty-first century is about connecting with all sorts of people, and Tim Stark’s gift is his ability to convey these connections. Whether he is bantering with a farmer’s market customer or accepting a free meal from a five-star chef, the spark of necessary human interaction comes through effortlessly in his prose.”
—Dan Sullivan, senior editor of The Rodale Institute