The City of God Reader’s Guide 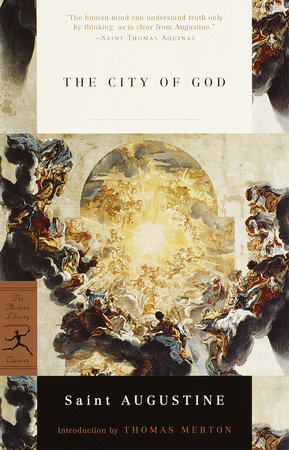 The City of God Reader’s Guide

1. St. Augustine describes the origin of The City of God as follows: "[in 410] Rome was destroyed as a result of an invasion of the Goths…. The worshipers of many false gods … began to blaspheme the true God more sharply … than usual." How does an awareness of the origin of this work as a grand defense of Christianity help us to understand it?

2. What is the meaning of the "two cities," one of which is "of this world," and the other of which is "of God"? How does St. Augustine’s analysis of these two cities and their histories help organize and structure this work?

3. St. Augustine elaborates the notion of predestination (that all things are preordained by God), an idea taken up much later by Martin Luther and John Calvin. Discuss this crucial idea and its implications.

4. St. Augustine was deeply interested in the workings of the human mind. How do Augustine’s ideas about sense perception, will, intellect, and memory resonate with, or differ from, our own? In what ways does The City of God shed light on your own experience of being human?

5. The concept of doubt was crucial for St. Augustine. How is this concept elaborated in The City of God?

7. St. Augustine is widely regarded as one of the great stylists in the history of Christian literature. What is your sense of St. Augustine’s style-his ability to communicate and render intelligible the complex ideas, arguments, and concepts that constitute The City of God?

Learn More About The City of God
print

The Bhagavad Gita
Back to Top