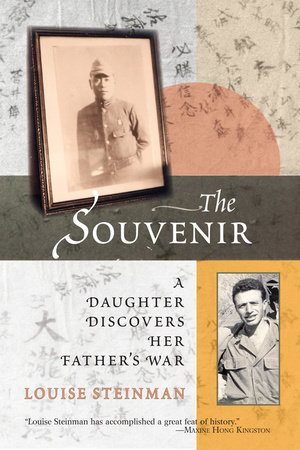 1. Steinman’s quest began with the discovery of the box of letters and the flag. She also mentions other “souvenirs” in the book–an antique ring and a small silver wine cup. What objects in your daily life contain important memories? Why?

2. Steinman had little knowledge about the Pacific War when she began reading her father’s letters and her quest led her to conduct extensive research. How has “The Souvenir” deepened/changed your understanding of that conflict?

3. What is the difference between reading a history book about WW II in the Pacific and reading a personal story about the war? How does this allow you–the reader–to “enter” into history. Are there veterans in your own family? Have you ever asked them questions about their experiences?

4. Individual countries look at their past conflicts within their own accepted views of history. Steinman explores some of the discrepancies between the Japanese and the U.S. official views about on Hiroshima. Does her examination of the rhetoric from both sides add to your understanding of this pivotal event? What does her friend Shoji Kurokami–a native of Hiroshima– mean when he says, “”Some people may think bomb was good–and maybe that’s OK. But to me, bomb is bomb.”

5. The Smithsonian Museum’s proposed exhibit to commemorate the 50th anniversary of the end of World War II was fraught with controversy. Steinman repeats the words of a Smithsonian official, “The veterans wanted the exhibit to stop when the doors to the bomb bay opened. And that’s where the Japanese wanted it to begin.” (p. 135) Why is it important for former combatant nations to look at history together?

6. One of the veterans Steinman interviewed said “your father would be rolling over in his grave” at the idea of Steinman attempting to return the flag. Do you agree?

7. Steinman owns to her naiveté about the Pacific War when she first found her father’s letters. How might her naivete been a hindrance to her quest to return the flag? How might it have been a help?

8. Steinman says that she could understand why the WW II veterans she interviewed were still bitter towards the Japanese. Do you think that reconciliation between groups in conflict must wait for later generations? Why?

9. Steinman says she inherited an antipathy to Filipino cuisine because of her father’s experience in the war. How are prejudices transmitted to the next generation? What prejudices and stereotypes of other cultures might you have inherited through your family’s history?

10. The paradox of the actual souvenir flag is that it means different things to different people. What does it mean to Steinman, her father, the Pacific vets she interviewed? What doe sit mean to Yoshio Shimizu and Shimizu’s family?

11. Some authors write whole novels about places they have never visited, only imagined. Do you think it was necessary for Steinman to journey to Balete Pass in northern Luzon, the Philippines to understand her father’s experience in the war? How does her visit to the actual place inform the book?

12. Why do you think Norman and Anne Steinman preserved Norman’s war letters–even though he wouldn’t discuss the war?

13. Steinman writes that she was shocked by some of the language in her father’s letters. How was that language in keeping with the war propaganda towards the Japanese enemy then current in the United States? How was the enemy demonized by both sides in the Pacific War?

14. The villagers in Suibara welcomed Steinman with both warmth and formality. Why does the entire village turn out to meet her? Do you think such a communal reception would be possible in the United States were the roles reversed and a Japanese daughter returned the souvenir of an American soldier to his family?

15. There are several passages of fiction or what Steinman calls “speculation” in “The Souvenir”–the Passover scene and the vision of Yoshio at the end of the book. What do these sections add to your understanding of Steinman’s quest?

16. Steinman’s own journey to understand her father is intercut with her father’s journey to the Pacific and back. How do these two journeys comment on one another? How might the book have been different if Steinman had not included her father’s letters?

17. “So many unknowables in a life, . . .How a name on a piece of cloth could propel you halfway around the world.” How does her encounter with the Shimizu family affect Steinman? How does it affect the Shimizus?

18. Steinman tries to look at the war from the Japanese POV. The “official” Japanese view is to be found in institutions like Yasukuni Shrine and the Hiroshima Peace Museum. What does she learn from talking to the villagers in Suibara that departs from the official view?

Learn More About The Souvenir
print

Nothing But the Truth
Marie Henein

No Cure for Being Human
Kate Bowler

The Last Doctor
Johanna Schneller and Jean Marmoreo
Back to Top