The Charterhouse of Parma Reader’s Guide 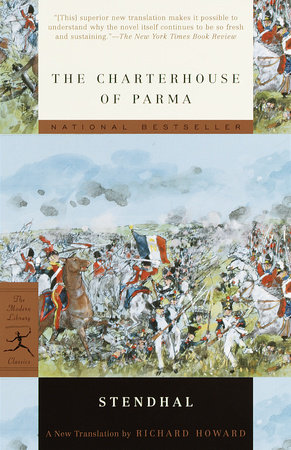 The Charterhouse of Parma Reader’s Guide

1. This novel has often been praised for its effect upon readers. The French writer Jean Giraudoux famously remarked that it produces "some incomparable air of which every human being needs absolutely to have taken at least one breath before they die." Discuss the overall effect of Richard Howard’s new translation of Charterhouse on you as a reader.

2. The impetuous, idealistic Fabrizio is, like many of the characters that inhabit this novel, an intensely vivid literary realization. Discuss Fabrizio’s character, and in particular his relationship to authority and the state as we follow the course of his tempestuous life.

3. Some have argued that the true heroes of this book are Fabrizio’s aunt and her lover. Do you agree?

4. Stendhal was an officer in Napoleon’s army, and later a diplomat in Italy. How do these experiences play into the places and events recounted in the novel? Could only a seasoned diplomat have rendered court intrigue with Stendhal’s precision?

5. A number of critics (for instance, French feminist Simone de Beauvoir) have noted that female characters are often more sympathetically portrayed than male characters in Stendhal’s work. Do you agree? Discuss the way Stendhal treats femininity and masculinity in Charterhouse, and the virtues and foibles that seem to be associated with each.

6. Stendhal wrote this novel in a breathtaking fifty-two days, a pace reflected in the galloping prose style. Remarking on this, Bernard Knox, in The New York Review of Books, wrote, "From the very beginning the narrative takes the reader by storm with its fervid pace … and this speed lies at the base of another aspect of the narrative, its unpredictability." Discuss this comment, and your reaction to the pace and plot of The Charterhouse of Parma.

Learn More About The Charterhouse of Parma
print

Sentimental Education
Back to Top