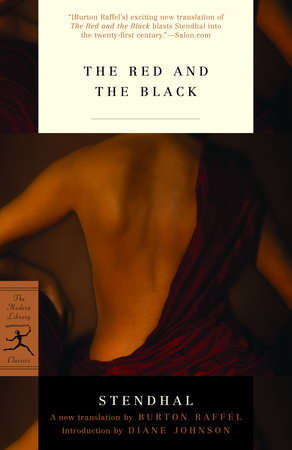 print
The Red and the Black Reader’s Guide

1. Does it matter whether or not Stendhal’s detailed, vivid, deeply and fully realized “history” is accurate? It is brilliantly presented, massively marshaled; characters and action ring powerfully true. But is it trustworthy?

2. Julien not only surrenders quite readily to the death penalty: he fairly embraces it. Is this, like so many of his actions throughout the book, yet more reckless romanticism? Or is it in some way different and deeper? Does the earlier part of the book fit with/lead up to this ending? Or, as has sometimes been suggested, is the ending either tacked on or, still worse, melodramatic?

3. Stendhal’s France is portrayed–at every level– as an immensely materialistic society. In the final analysis, is Père Sorel either more or less materialistic than the Marquis de La Mole? Would this social portrait have been different if Stendhal had been a native American and was writing about the United States?

4. Mathilde de La Mole and Madame de Rênal are almost startlingly unlike, in virtually all respects. Yet both of them are passionately in love with Julien Sorel, a man who is completely unlike either of them or their expectations and dreams for themselves. Does Julien earn their love? Does he deserve it?

5. Julien Sorel hungers for epic success, and very nearly achieves it. We learn that he has had a grindingly difficult experience of lower bourgeois existence as well as the Church. He has had an almost equally chilling experience of both high bourgeois and aristocratic life. Where–if anywhere–could he possibly have found himself at home?

6. Julien Sorel’s weaknesses are perhaps easier to see than his strengths, which tend to be simple and basic. Stendhal repeatedly notes that Julien does not have a first-rate mind. (Stendhal himself had exactly the same astonishing memory he gives to Julien.) In The Red and the Black, do simple, basic virtues succumb to or prevail over more complex and rigorously intellectual capabilities? In any case, Stendhal is emphatically not a utopian. But what image of a good, or perhaps merely a better, society finally emerges from his book?

7. The Church plays an enormous role in the entire novel, much of it decidedly negative. But does the large roster of Church officials, ranging from very high to very low, support the frequently heard claim that Stendhal was fiercely and fundamentally anticlerical?

8. Napoleon, too, figures hugely in the novel (though not as an active character), but this is not simply because he has had an enormous and continuing influence on Julien Sorel. Napoleon’s entire career, and especially his long reign as ruler of France, is subjected to intense examination, and from many different perspectives. Again, it has often been said that Stendhal was more or less a Napoleon worshiper. Is this true?

9. Stendhal himself had been a soldier–he had endured, and survived, the Grand Army’s devastating retreat from Moscow. Many of the novel’s characters are or have been military men; military issues are frequently discussed and debated. In The Red and the Black, is there a clearly cohesive, or even a straightforward, view of war and either its advocates or its critics? Or is Stendhal here, too, attempting a broader and multivalenced portrayal than critics sometimes seem to recognize?

10. For roughly half a century, Balzac was virtually the only significant figure in French literature to express appreciation of and deep respect for Stendhal’s fiction. This is plainly not an accident. What makes these two novelists similar? Dissimilar? Why did the twentieth century see an enormous rise in Stendhal’s literary reputation and influence, exactly as he himself had predicted?

11. Love, in all its many aspects, plainly fascinated Stendhal the novelist, as it clearly fascinated him as a man. Yet it has often been argued that, properly considered, Stendhal (born in 1783) was not in fact a Romantic. How does the evidence proffered in The Red and the Black support or contradict this argument?

12. There can be no doubt that Stendhal finds social relationships and the customs and rules that regulate them to be of the very highest interest. Is this either an essentially French or an essentially nineteenth-century preoccupation? Are there twentieth-century novelists, in France or elsewhere, who share Stendhal’s profound interest in manners?

13. The Marquis de La Mole is about as fully and fairly drawn as any character in the history of fiction. We see him magnificent, we see him base. He can be open-minded and generous; he can be closed-minded, autocratic, and even niggardly. We see him love, and we see him hate. What does Stendhal intend us to understand from this remarkable portrait?

14. Stendhal’s evocations of place (“descriptions” would surely be too meager and inadequate a word to describe them) are dazzling. He evokes with the same glowing three-dimensionality countryside, towns, cities, and entire countries. In The Red and the Black, place receives very nearly as much authorial attention as does character, even though it is fair to say that Stendhal is as sensitive and attuned to his characters as any fiction writer in history. Why does place receive such large attention? Is it deserved? Is it necessary? Is it perhaps excessive? Or is it exactly right for Stendhal’s purposes?

15. Stendhal’s style– the way he writes–is almost magically effective. The very rhythms and shapes of his sentences help him to evoke the fullest possible shades of meaning. What stylistic role is played by Stendhal’s choice of individual words? What kinds of words does he favor? What kinds does he shun? Is he consistent in such matters? Who–if anyone–does his style seem to resemble, in any significant way(s)?

From the Hardcover edition.
Learn More About The Red and the Black
print

The Lost Estate (Le Grand Meaulnes)
Back to Top