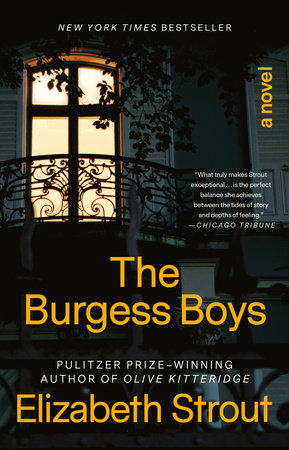 Recently I was going through drafts of old manuscripts, and this is what I found: a scene of the Burgess family emerging from the middle of Abide with Me. I was surprised to see it there. Clearly, I had been thinking about these boys-these Burgess children—for many years, before they finally landed in a book of their own. Abide with Me was my second novel; it took me seven years to write it, and it was published eight years after my first novel, Amy and Isabelle, appeared in 1998. Olive Kitteridge was my third book, published in 2008. After that I sat down and began, or thought I began, The Burgess Boys. So to discover this scene of the Burgess family, sketched out so many years earlier, indicated to me the tenacity of their hold on my imagination. I had no memory of having written anything about the Burgess family that long ago. But now, on notebook paper, in blue ink, here was a scene in which Polly Burgess—who later became Barbara Burgess—seeks out the large-hearted Reverend Tyler Caskey to see if he will perform her husband’s funeral. She sits behind the wheel of her car in the man’s driveway, three small children with her, and Tyler comes to realize that something is very wrong. Polly Burgess is understandably agitated, but Tyler has no way of knowing that one of the children is responsible for the family tragedy. He asks Polly, out of concern and politeness, if she has a church of her own. Polly takes umbrage, interpreting his question as one of castigation, and drives off, one of the boys looking out the rear window. Tyler is haunted by the image.

As it happens, Tyler and the Burgesses are never to meet again.

The two storylines were ultimately separated: Tyler Caskey had his own book, Abide with Me, and the Burgess kids grew up and are with you now. It is always hard for me to clarify and properly remember how a book got its start, but coming across this scene reminded me of just how long images or thoughts can linger in my mind before reaching the final page. And it gave me some clue as to what I had first been drawn to in writing The Burgess Boys, part of which is how different cultures deal with distress. And this has to do, quite naturally, with time and place. Had the Burgess kids been born into an affluent family of today’s New York City, there is a good chance that all three, along with their mother, would have had extensive therapy after the accident that comes to determine so much of the rest of their lives. Or friends might have talked openly about their own pasts, and how they dealt with childhood traumas. But the Burgesses grew up half a century ago in northern New England, where a person’s inner life was traditionally not something for common discussion. “Grit your teeth and bear it” was, and perhaps still is, the maxim children heard as they grew up in this part of the world.

And that’s what the Burgess kids did. They gritted their teeth and went forward, which is actually what most people do in most parts of the world. Surprisingly—surprising to me, anyway—most people bear ostensibly unbearable things. It is the particularities of bearing life that make us distinct and singular. The Burgess siblings each grew in different ways, according to who they were and who they thought they were. The country grew as well. A Somali community emerged in the whitest state of the Union, and people responded to this, as people have responded for years to immigrant populations everywhere. We know that some people carry a strong fear of the unfamiliar. Others are moved to immediately defend a vulnerable population. Most people, I think, fall somewhere in between, balancing their fears with a desire to be decent. And what this means, really, is that change takes time. It takes time, for example, for a town that has traditionally been all white to accept that their high school soccer team has become one mostly of dark-skinned people, to see in the stands women wearing hijabs as they cheer their sons and brothers on. Time is needed to learn that our view of the world is exactly that: our view, and not a view belonging to someone else. And our view is, and should be, continually open to change.

Books help. They help by allowing us to imagine the realities of another person’s inner—and outer—life. Bernard Malamud said that we value man by describing him. So when I describe Jim Burgess, I am aware of—and honor—the anxiety and pain he has lived with his whole life. When I describe Susan Olson, I am aware of the quotidian bravery she maintains. I am aware of Bob Burgess’s steadfast heart, which keeps beating in spite of the cigarettes he smokes. When I describe Abdikarim, I respect and value the terrible violence and disruptions of his history. But I am the writer. Being aware of these aspects of character is my job. That Zachary Olson is only half aware of the severity of his actions seems in keeping with the idea that many of us—as we live our lives without such writerlike examination—are only half aware of what our actions mean. This is where the conversation between reader and writer comes in. Readers can more clearly see aspects of themselves and of others if the writer has been scrupulous in crafting a fictional truth. It is not “good” or “bad” that interests me as a writer, but the murkiness of human experience and the consistent imperfections of our lives. To present this in the form of fiction helps make our humanness more acceptable to the reader; this is my wish.

The Burgesses’ story is an American story. We are a country built on the continuing influx of a variety of cultures, and we are also a country in which the dream of reinventing ourselves continues to thrive. Running away—especially to a city—has long been attractive to those who want to leap from their pasts. Our American, and changing, sense of family reflects confusion about what the individual is entitled to, and what our responsibilities may or may not be to those we leave behind. In a different culture, in a different time, these confusions would play out another way, or not even be confusing at all: For example, there was a time in rural New England when children were expected not to leave but instead to marry and remain nearby, helping with the family farm, or perhaps the family business. There was a time when a child grew up and worked in the same textile mill that his father and mother had worked in. But most of those mills are now gone. The mill that the Burgess father worked in has long been closed. And so this story belongs to the Burgess boys. It belongs to their sister as well, but it is the boys who have attempted, with desperation and arguably some success, to get ahead of that determinative sunny day when they were small children in the town of Shirley Falls, Maine.

I wrote the story, but you will bring to it your own experience of life, and some other reader will do the same, and it will become a different story with each reader. I believe that even the time in your life when you read the book will determine how you receive it. Our lives are changing constantly, and therefore not even our own story is always what we think it is. The mutability of life—our losses, our loves, our fears—can at times be overwhelming. I hope that reading The Burgess Boys makes this changeability become, if even only for a few moments, more manageable. No one is alone in wondering: How did that happen? How did I get to this place right now? History, our own and the world’s, continues to be made, and the accuracy of history continues to be questioned. As the Burgess kids discover, we are what we remember—and what we don’t remember, too. But in the complementary acts of writing a book and reading a book, you and I share the commemoration of lives, each in our own way construed.

1. How did the narrator’s introduction telegraph your expectations about the Burgess family?

2. Jim and Bob Burgess both left Shirley Falls for New York City. Why there, when they could have gone anywhere? And why did Susan stay behind?

3. The Burgess siblings have lived with a childhood trauma their whole lives. How has each one compensated for this in his or her personal and professional adult life?

4. Which Burgess brother, Jim or Bob, did you find more sympathetic? Did you find yourself changing your mind as the story unfolded?

5. To many readers, Jim may seem more competent than Bob in dealing with Zach’s “prank.” Do you agree? If not, why not?

7. When Jim reveals his own childhood secret, what journey does Bob have to take to first separate from and then return to his brother, Jim? What about their relationship has changed? What, if anything, remains the same?

8. What do you think compelled Zach to throw the pig’s head into the mosque?

9. Both Burgess brothers are lawyers. How do their inner lives reflect their very different professional choices?

10. How do Helen and Susan’s roles as mothers define them?

11. How does the Burgess family’s multigenerational history in Shirley Falls add to the siblings’ emotional challenges?

Everything I Never Told You