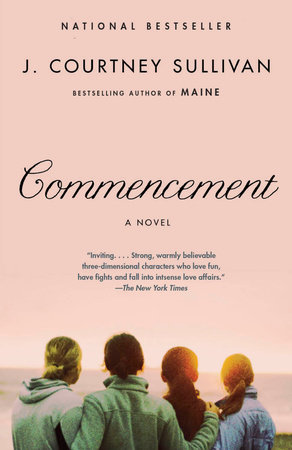 “One of the year’s most inviting summer novels. Strong, warmly believable three-dimensional characters who have fun, have fights and fall into intense love affairs.” —The New York Times

The summary, questions, and reading list that follow are intended to enhance your reading group’s discussion of J. Courtney Sullivan’s witty and accomplished debut novel, Commencement.

A tender story of friendship, a witty take on liberal arts colleges, and a fascinating portrait of a generation of women who have all the opportunities in the world, but no clear idea about what to choose.

Assigned to the same dorm their first year at Smith College, Celia, Bree, Sally, and April couldn’t have less in common. Celia, a lapsed Catholic, arrives with her grandmother’s rosary beads in hand and a bottle of vodka in her suitcase; beautiful Bree pines for the fiancé she left behind in Savannah; Sally, pristinely dressed in Lilly Pulitzer, is reeling from the loss of her mother; and April, a radical, redheaded feminist wearing a “Riot: Don’t Diet” T-shirt, wants a room transfer immediately.

Together they experience the ecstatic highs and painful lows of early adulthood: Celia’s trust in men is demolished in one terrible evening, Bree falls in love with someone she could never bring home to her traditional family, Sally seeks solace in her English professor, and April realizes that, for the first time in her life, she has friends she can actually confide in.

When they reunite for Sally’s wedding four years after graduation, their friendships have changed, but they remain fiercely devoted to one another. Schooled in the ideals of feminism, they have to figure out how it applies to their real lives in matters of love, work, family, and sex. For Celia, Bree, and Sally, this means grappling with one-night stands, maiden names, and parental disapproval—along with occasional loneliness and heartbreak. But for April, whose activism has become her life’s work, it means something far more dangerous.

Written with radiant style and a wicked sense of humor, Commencement not only captures the intensity of college friendships and first loves, but also explores with great candor the complicated and contradictory landscape facing young women today.

1. What are your thoughts on single-sex education?

2. Do you think Commencement presents an accurate description of a women’s college?

3. In the novel the character Sally becomes involved with a professor. Do you think student/teacher relationships are more common at women’s colleges? Or is that an out-dated myth?

4. This book has a strong feminist message. What do you take away from this?

5. Commencement‘s protagonists graduate from Smith in 2002. Gloria Steinem compares Commencement to Mary McCarthy’s The Group, which depicts a group of eight young women who graduate from Vassar in 1933. And Gloria Steinem, herself, graduated from Smith College in 1956. How do you think these three generations of experiences at women’s colleges differ and how do they remain the same?

6. Each character thought they had a very clear notion of who they were when entering college. How did each grow and change during their time there and what impact did their unique friendships have on each other?

7. Do you think all of the protagonists in Commencement are feminists?

8. On page 155, Sally feels her friends have not celebrated her engagement enough and she remarks “The real sting in it came from the fact that the same women who had counseled her through her grief for four years at college wanted nothing to do with her joy. Perhaps it took more to feel truly happy for a friend than it did to feel sympathy for her.” Do you think Sally is right, or do you think other emotions are at play for her friends?

9. When Bree and Lara visit Lara’s boss’s house, they meet Nora and Roseanna and their son, Dylan. Bree seems to find them ridiculous while Lara embraces their lifestyle. How does this incident speak to the roles they play in their relationship and how does Bree’s family situation color her perceptions of this afternoon?

11. Poet John Malcolm Brinnin once said, “Proximity is nine-tenths of friendship.” How true is that for these women?

12. What is your favorite college memory?

J. Courtney Sullivan’s work has appeared in The New York Times, New York, Elle, Cosmopolitan, Allure, Men’s Vogue, the New York Observer, Tango, and in the essay anthology The Secret Currency of Love. She is a graduate of Smith College, lives in Brooklyn, and works in the editorial department of The New York Times. Commencement is her first novel.

30 Things I Love About Myself
Radhika Sanghani

The Divorce Party
Laura Dave
Back to Top