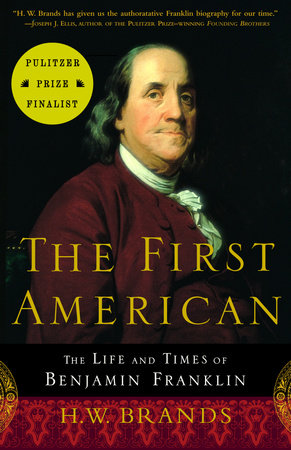 The introduction, discussion questions, suggested reading list, and author biography that follow are intended to enhance your group’s reading of The First American, the first comprehensive biography of Benjamin Franklin in over sixty years. In it, acclaimed historian H. W. Brands vividly brings to life one of the most delightful, bawdy, original, and important figures in American history.

Benjamin Franklin was perhaps the most beloved and celebrated American of his age, or indeed of any age. His circle of friends and acquaintances ranged geographically from America to Europe, and in personality from Cotton Mather to Voltaire, from Edmund Burke to King George III, from Sir Isaac Newton to Immanuel Kant. Among his many inventions were the lightning rod, the Franklin stove, and the armonica, a musical instrument that became the rage of Europe. From his humble beginnings in Boston as a printer’s apprentice, he became, within two decades, the leading printer and one of the most important businessmen in the colonies. A longtime civic leader in Philadelphia, he created the city’s first fire department, wrote the bestseller Poor Richard’s Almanac, served as Postmaster General for the Colonies, and in the process, completely modernized the mail service. A bon vivant and ladies’ man throughout his life, he matched wits with Parliament and the Crown during the decade leading up to the Stamp Act, and as an official agent to Parliament he helped push the Colonies into open rebellion.

Tracing Franklin’s gradual transformation from reluctant revolutionary to charismatic leader in the fight for independence, Brands posits that on the issue of revolution, as Franklin went, so went America. During the Revolutionary War, Congress charged Franklin with wooing the King of France to the American cause, and it was the diplomatic alliances he forged and funds he raised in France that allowed the Continental Army to continue to fight on the battlefield. In his final years, as president of the Constitutional Convention, it was Franklin who held together the antagonistic factions and persuaded their members to sign the Constitution.

Drawing on previously unpublished letters to and from Franklin, as well as the recollections and anecdotes of Franklin’s contemporaries, H. W. Brands has created a rich and compelling portrait of the eighteenth-century genius who was in every respect American’s first Renaissance man, and arguably the pivotal figure in colonial and Revolutionary America.

1. As a young man, Franklin arrived at a position of what Brands called "pragmatic moralism" [p. 95] and made a list of four resolutions and thirteen virtues he wished to cultivate in himself [pp. 96-8]. What are the strengths of this plan for self-improvement and contentment? What aspects of his program would still be useful today?

2. During the nineteenth century, Poor Richard’s Almanac, with its emphasis on duty, thrift, and hard work, was required reading for young people. Mark Twain imagined that Franklin "had a habit of living wholly on bread and water, and studying astronomy at mealtimes–a thing which has brought affliction to millions of boys since, whose fathers had read Franklin’s pernicious [auto]biography." Brands notes that the writer D. H. Lawrence was also plagued in his youth by the model of Benjamin Franklin [p. 278]. How does Brands’ biography revise the image of Franklin as a prime exemplar of materialism and middle-class values?

3. Brands describes Franklin’s personality as self-effacing, non-confrontational, affable, and generous. What were the particular advantages of his temperament? At what moments in his life did his personality fail him? Why did John Adams distrust and dislike Franklin?

4. What were the strengths and limitations of Franklin’s relationship with his wife Deborah? Did Deborah accept the idea of their marriage as secondary to the demands of Franklin’s duties in London and Paris? Does it seem unnatural that Franklin had not seen her for years when she died? Do John Adams’s assumptions about Franklin’s libertinism make sense, given his attempted seduction of Madame Brillon and Madame Helvétius related in Chapter 24? How clear a portrayal does Brands give his readers of what Franklin’s romantic involvements were before and after Deborah’s death?

6. Brands argues that Franklin’s interrogation by British solicitor general Alexander Wedderburn turned him irrevocably into an American patriot [see Prologue and Chapter 21]. What were the wider implications of Franklin’s having turned over the Hutchinson letters to Massachusetts House speaker Thomas Cushing? Why does Brands call this action "the most fateful misstep of his career" [p. 452]? Why was Franklin so determined, earlier on, to call himself a Briton?

7. A clear statement of Franklin’s approach to life and its difficulties appears on page 379, in a letter he wrote to his sister: "Take one thing with another, and the world is a pretty good sort of world; and ’tis our duty to make the best of it and be thankful. One’s true happiness depends more upon one’s own judgment of one’s self, on a consciousness of rectitude in action and intention, and in the approbation of those few who judge impartially, than upon the applause of the unthinking undiscerning multitude, who are apt to cry Hosanna today, and tomorrow, Crucify him." Would this still be considered useful advice today? Were Franklin’s pragmatism and optimism the result of temperament, philosophy, or both?

8. Brands relates an incident in which Franklin made an illegal move in a chess match, ignoring the fact that his king had been placed in check [p. 606]. How does this incident reflect his sense of humor, and the spirit in which he took his responsibilities as an agent of the American Revolution?

9. Disputing the idea of the Society of the Cincinnati as too akin to inherited aristocracy, Franklin wrote, "Honour, worthily obtained . . . is in its nature a personal thing, and incommunicable to any but those who had some share in obtaining it" [p. 668]. Similarly, he felt, "Only a virtuous people are capable of freedom" [p. 667]. What do these statements reveal about Franklin’s deeply democratic instincts and about his emphasis on the role of personal morality in a democratic society?

10. Franklin owned two slaves who were his personal servants, and he didn’t convert to the cause of true abolitionism until 1787, when he became the president of a Quaker abolitionist group. Brands relates a visit Franklin made in 1763 to a school for black children, where he realized, "Their apprehension seems as quick, their memory as strong, and their docility in every respect equal to that of white children" [p. 355]. How does this early realization, upon which Franklin did not act, compare with his impassioned efforts years later to halt the slave trade [see pp. 701-4]? What accounts for his change in conscience?

11. One of the most painful episodes in Franklin’s life was his alienation from his son William, over William’s loyalty to the British crown. Should Franklin have forgiven William this breach of filial loyalty? Or is this a situation in which Franklin’s patriotism overruled his love for his son? Does his refusal to forgive William reveal a lack of tolerance? Should Franklin have handled the situation differently?

12. Brands comments on the difference between Franklin and Washington, both of whom were loved by the public: "A warrior like Washington might find charm in the sound of bullets whistling overhead; Franklin was more beguiled by the sense of embodying the virtuous desires of ordinary people" [p. 271]. Did the American people think of Franklin as a sort of benevolent father, who embodied the best in themselves and could therefore be trusted as a role model?

13. Franklin was extraordinarily active in the life of his community; in addition to his political service he created a library, a college, a fire department, and a postal service, as well as having engaged in diplomacy with the Indians and looked after the needs of family members and friends. He also believed that public servants should not be paid for their work. Would this ensure that politicians be motivated solely by altruism? Or is such a plan entirely impractical?

14. If it could be argued that Franklin, in his loyalty to his British roots, was a relatively late convert to the revolutionary cause, in what sense is the book’s title meant? Did Franklin define for his time what it meant to be an American?

15. Regarding the framing of the Constitution, he said, "I must own I have so much faith in the general government of the world by Providence that I can hardly conceive a transaction of such momentous importance to the welfare of millions now existing, and to exist in the posterity of a great nation, should be suffered to pass without being in some degree influenced, guided, and governed by that omnipotent, omnipresent, and beneficent Ruler" [p. 696]. Did Franklin’s approach to religion and his idea of God change as he got older? What are the most important elements in his religious manifesto [p. 707]?

16. Towards the end of his life, Franklin wrote that since reason and progress were so clearly advancing with time, "I have sometimes almost wished it had been my destiny to be born two or three centuries hence" [p. 705]. What might Franklin be doing if he were alive today? Might he be a statesman, a scientist, an industrialist, or a millionaire? Is it likely that he could exercise his various talents as freely and effectively now as he did in the eighteenth century?

17. What is notable about Brands’ approach to his subject? His narrative style? Judging from his final thoughts on Franklin [p. 715], how would you characterize H. W. Brands’ perspective on this central figure of American history? What issues does he emphasize, what elements of Franklin’s personality does he gloss over? Is Brands benevolent, detached, or critical in his role as biographer?

H. W. Brands is a professor of history at Texas A&M University in Bryan, Texas. He is the author of T.R., the critically acclaimed biography of Theodore Roosevelt, and The Reckless Decade: America in the 1890s. He lives in Austin.

The Collected Autobiographies of Maya Angelou

A Song Flung Up to Heaven

Dreams from My Father

I, Asimov
Back to Top