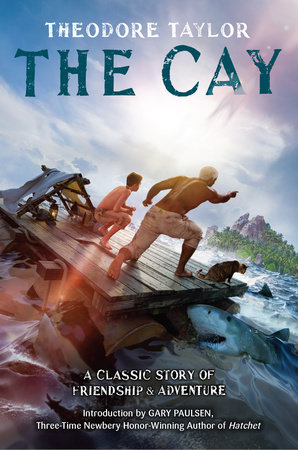 When a freighter to the United States is torpedoed during World War II, an 11-year-old boy is blinded and stranded with an elderly black man who teaches him survival skills.

Phillip Enright lives with his parents on the island of Curaçao where his father works for Royal Dutch Shell. There is a threat of a German invasion and Mrs. Enright decides to take Phillip back to the states. When the ship they are traveling on is torpedoed, Phillip is separated from his mother and left floating on a wooden raft with Timothy, a black man from the West Indies. The two drift to a small cay where they are left to survive with only a small amount of food salvaged from the ship. Phillip, who is blinded by a head injury, must depend on Timothy to stay alive. Though Phillip has been reared to be prejudiced against blacks, his attitude changes as Timothy teaches him to be independent in spite of his blindness.

Theodore Taylor was born in North Carolina and began writing at the age of 13 as a cub reporter for the Portsmouth, Virginia, Evening Star. He left home at 17 to join the Washington Daily News as a copy boy, worked his way toward New York City, and became an NBC sportswriter at the age of 19. Since then he has been a magazine writer, a movie publicist and production assistant, a documentary filmmaker, and the author of many books for adults and children. The Cay has won many literary awards, including the Lewis Carroll Shelf Award, and was made into a Universal Studios film presentation starring James Earl Jones.

Display a map of the West Indies and point out the island of Curaçao. Ask students to use books from the library or sites on the Internet to research Curaçao. What is the primary culture on the island? How do the people make their living? What do they do for entertainment? What are special customs? Have students share their findings in class.

Survival–The skills necessary for Phillip and Timothy to survive on the raft are very different from the skills they need on the cay. How does Timothy instinctively know what they must do? Discuss why Timothy feels so strongly about teaching Phillip survival skills once they are on the cay. At what point does Phillip feel that he has graduated from Timothy’s survival course? How will Phillip’s experiences on the cay and his relationship with Timothy help him survive in life?

Fear–Discuss the many fearful scenes in the novel. At the beginning, Phillip’s mother tries to protect him from fear, while his father tries to help him face it. Discuss how his mother’s protective nature actually creates more fear in him. How does Timothy help Phillip deal with this emotion? Does Timothy have his own fears? How does Phillip’s fear sometimes turn to loneliness? What does Phillip mean when he says, “It was as if my blindness were protecting me from fear”? (p. 114)

Anger–Phillip says, “At one point my fear turned to anger.” (p. 46) Discuss the relationship between fear and anger. Why is Phillip angry with his mother? Phillip pushes Timothy to a fit of anger, and Timothy strikes him. Phillip says, “Something happened to me that day on the cay. I’m not quite sure what it was even now, but I had begun to change.” (p. 72) Discuss what causes Phillip’s outburst of anger. Ask students to discuss what they think happened to Phillip that day.

Courage–Ask students to define courage. Debate whether courage can be taught, or whether it is something innate. How does it take courage for Phillip to accept his blindness and learn to contribute to his own survival
on the island?

Racial Prejudice–Ask students to identify direct quotes from the novel that indicate that Phillip is prejudiced. Explain what Timothy means when he says to Phillip, “[Your mother] started dis terrible wahr, eh, young bahss?” (p. 38) How are prejudices learned? Discuss how Timothy deals with Phillip’s racial remarks.

After Phillip is rescued, he tries to tell his parents about Timothy, and says, “I had the feeling that neither of them really understood what had happened on our cay.” (p. 136) Ask students to brainstorm the words that Phillip might have used to explain what had happened. Discuss whether he can change his mother’s attitude.

Friendship–Ask students to describe Phillip’s friendship with Henrik van Boven. How are their lives different? Explain what Phillip means at the end of the novel when he says, “I saw Henrik van Boven occasionally, but it wasn’t the same as when we’d played the Dutch or the British. He seemed very young.” (p. 136) Discuss Phillip’s relationship with Timothy. At what point in the novel does Phillip begin to accept Timothy’s friendship?

Language Arts–Read the dedication page in the novel. Have students research the life and work of Dr. Martin Luther King, Jr. What was Dr. King’s dream? Ask students to write a short paper explaining how The Cay helps them “know and understand” the dream.

Ask students to read one of Gary Paulsen’s Brian Books (Brian’s Return, Brian’s Winter, The River). Compare and contrast Phillip’s experience to that of Brian. Then have them write and exchange letters between Phillip and Brian after the characters are both safe at home.

Phillip says, “I even thought about Henrik van Boven and what a story I would have to tell when I saw him again.” (pp. 63-64) Conduct a class storytelling competition, and ask each student to prepare a three-minute account of what Phillip might tell Henrik.

Social Studies–Voodoo is a common practice in the West Indies, but Phillip is frightened when he realizes that Timothy thinks that Stew Cat is an evil spirit (a jumbi). Ask students to research some of the Voodoo practices such as the one Timothy uses when he spends the evening carving a Stew Cat (p. 86). Then have them discuss why Voodoo is in conflict with most religious practices in the United States.

Timothy teaches Phillip about survival, but Phillip teaches Timothy about geography and how a volcano could have caused Devil’s Mouth. Send students to the library to research the geography of the West Indies islands. Have them create an illustrated brochure about the formation of the islands that might be given to tourists.

Science–Timothy becomes ill with malaria, and Phillip must care for him without the aid of medicines. Ask students to research malaria. What causes it? Is it contagious? How is it treated? How is it prevented? Then have them find out the parts of the world where the disease is prevalent today.

Phillip and Timothy survive largely on fish they catch. Ask students to make a list of the fish, like langosta (lobster), mentioned in the book. Then have them gather pertinent information about the various fish and make an illustrated guide called Edible Sea Life in the West Indies.

A hurricane strikes the cay and Phillip and Timothy are faced with new challenges to their survival. Have students research hurricanes and prepare a small publication called Tips for Surviving Hurricanes that might be distributed to people who live in the islands.

Drama–Phillip Enright would have been an adult during the Civil Rights Movement. Dramatize a scene where he meets Dr. Martin Luther King, Jr. Have him tell Dr. King about Timothy, and how his experience on the cay changed his views regarding race.

Music/Art–Calypso music is part of the culture of the people in the West Indies. Most Calypso songs tell a story and involve homemade instruments. Find an example of Calypso music and play it for the class. Then ask them to write a Calypso song dedicated to Timothy.

Ask students to find out about the steel drum, an instrument commonly linked to Calypso music. (www.blarg.net/~toucans/Toc/makePan.html) Though a steel drum is very difficult to construct, students may enjoy decorating a drum and performing the Calypso songs that they have written.

The Historic Area of Willemstad
http://whc.unesco.org/sites/819.htm
This site offers a brief history of Willemstad, Curaçao.


Learn More About The Cay
pdf
Back to Top