Secrets of the Flesh Reader’s Guide 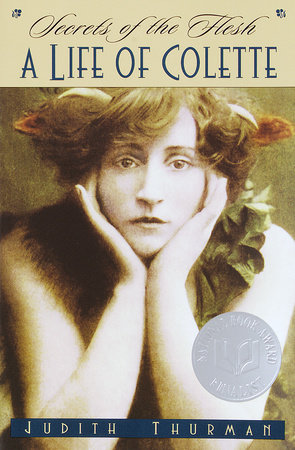 Secrets of the Flesh Reader’s Guide

1. How does Thurman’s choice of title work as both epithet and paradox? What balance exists between the physical and the cerebral in Colette’s life? How does the balance shift throughout her life? Which tends to havethe upper hand? Why?

2. Colette’s life challenges our notions of seeing the world in opposites: emo-tion and reason, work and play, love and lust, flight and confrontation, confession and concealment, and, even, male and female. Provide exam-ples
of the way Colette blurs and transcends these opposites.

3. Discuss the ways in which Thurman illustrates the relationship among place, historical moment, and character. How did Colette both embody and subvert the zeitgeist?

4. What connection exists between the sex Colette performed between the bedsheets and that which she committed to the sheets of paper? Where does the abstractness of writing intersect with the physicality and immediacy of sex for her? Why?

5. In Virginia Woolf’s novel The Waves, one character, daunted by the con-stancy of change, laments, "I am made and remade continually. Different people draw different words from me." To what extent did Colette’s charac-ter depend on the company she kept? Who "made and remade" her? What in her character remains constant throughout her life? Provide examples.

6. Discuss the role of Willy in Colette’s writing life. How did he wittingly or unwittingly catalyze it? How did moving out of his shadow both give form to and unsettle the self Colette would construct in prose?

7. Writing fiction served myriad roles in Colette’s life. Discuss some of its pri-mary functions. Did she write to rewrite her past? As a cathartic gesture? To escape as well as confront trial and temptation? Did fifty-plus years of writ-ing undo the line between memory as faithful recollection and invention?

8. Colette’s best fiction is an act of transformation charged with imagination.
What is lost or gained in such an approach? How would such work be
received in today’s confessional climate? Would it be construed as evasive
or as something else?

9. The pursuit of a "master" characterizes Colette’s sex life early on; later she becomes one. Explain the transition. Why did Colette maintain a deep interest in the domination-submission dynamic throughout her days?

10. Colette’s life and writings prefigured today’s gender debates. What evi-dence does her life provide for undermining traditional notions of male and female? In what is her iconoclasm rooted?

11. In her introduction to Sex, Art, and American Culture, Camille Paglia expresses the need for a new feminism, "one that stresses personal respon-sibility and is open to art and sex in all their dark, unconsoling mysteries." How did Colette, a century ago, embody and challenge such a definition
of feminism? What lies at the heart of her exclaiming, "You know what the suffragettes deserve? The whip and the harem."

12. Sido casts a long shadow over Colette’s life, provoking hatred, ambiva-lence, acceptance, and celebration. What lies behind these shifts in Colette’s attitude toward her mother? How did her experiences as a daughter shape her own approach to motherhood?

13. How can Colette be a woman of the flesh in myriad ways yet fear the touch of her daughter? What prevented Colette from accepting her daughter’s lesbianism?

14. What are the shared qualities and shortcomings among the men in Colette’s life? Which relationships muted her character and which gave it full play? With whom was she able to make the fewest compromises?

15. What do Colette’s relationships with Missy and, later, Bertrand reveal about her? Do they strike you as anomalous or revelatory? Why?

16. What did sex most often mean to Colette? Expression, rebellion, escape, freedom, narcissism, wholeness, pleasure–something else?

17. What does Colette’s life teach us about the differences between European and American moralities? Could United States culture have embraced such a figure a century ago? Today?

18. Colette, like Thurman, relished the well-turned aphorism. Discuss the following epigrams from the kindred spirit Oscar Wilde in relation to Colette’s life.
–Art is the only serious thing in the world. And the artist is the only
person who is never serious.
–If one tells the truth, one is sure, sooner or later, to be found out.
–Pleasure is the only thing one should live for. Nothing ages like
happiness.
–Those who see any difference between body and soul have neither.
–To love oneself is the beginning of a lifelong romance.

19. Prolific by any standard, Colette seemed to draw from an inexhaustible well of material. Most of the roles in her life–novelist, actress, journalist, playwright, critic, scriptwriter–were all about expression. What drove her ineluctable need to express herself? What replenished the well? Dis-cuss the relationship between her art and her life. Did one feed the other,
or not?

20. What weight does Thurman give to Colette’s fiction in anatomizing her life? What does she find in Colette’s fabrications that she does not find in her letters, journalism, or criticism? Where do all of these types of writing intersect for Colette? Are language and memory, for her or Thurman, too unsteady to present anything as fact?

21. Thurman’s biography has been lauded by critics for deftly using many of the devices we associate with the novel. Provide examples of the novel’s conventions at work in Secrets of the Flesh. What are the perils and possi-bilities of such an approach for a biographer?

22. Acknowledging Secrets of the Flesh as a work of dispassionate, spirited scholarship, does the work, nonetheless, convey a moral tone or particu-lar ethos? What themes does Thurman use as motifs in the book? What impressions linger? Why?

23. What secrets of the flesh persist despite Thurman’s thorough biography?

Learn More About Secrets of the Flesh
print

Up from Orchard Street

Square Haunting
Back to Top