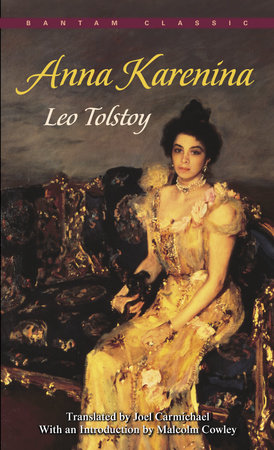 1. When Anna Karenina was published, critics accused Tolstoy of writing a novel with too many characters, too complex a story line, and too many details. Henry James called Tolstoy’s works "baggy monsters." In response, Tolstoy wrote of Anna Karenina "I am very proud of its architecture-its vaults are joined so that one cannot even notice where the keystone is." What do you make of Tolstoy’s use of detail? Does it make for a more "realistic" novel?

2. The first line of Anna Karenina, "Happy families are all alike; every unhappy family is unhappy in its own way," can be interpreted a number of ways. What do you think Tolstoy means by this?

3. In your opinion, how well does Tolstoy, as a male writer, capture the perspectives of his female characters? Do you think Anna Karenina is the most appropriate title for the book? Is Tolstoy more critical of Anna for her adultery than he is of Oblonsky or of Vronsky?

4. What role does religion play in the novel? Compare Levin’s spiritual state of mind at the beginning and the end of the novel. What parallels can you draw between Levin’s search for happiness and Anna’s descent into despair?

5. Why is it significant that Karenina lives in St. Petersburg, Oblonsky in Moscow, and Levin in the country? How are Moscow and St. Petersburg described by Tolstoy? What conclusions can you draw about the value assigned to place in the novel?

6. What are the different kinds of love that Anna, Vronsky, Levin, Kitty, Stiva, and Dolly seek? How do their desires change throughout the novel?

7. How do the ideals of love and marriage come into conflict in Anna Karenina? Using examples from the novel, what qualities do you think seem to make for a successful marriage? According to Tolstoy, is it more important to find love at all costs or to uphold the sanctity of marriage, even if it is a loveless one?

8. Ultimately, do you think Anna Karenina is a tragic novel or a hopeful one?

The Heart of the Matter
Graham Greene

The Noise of Time
Julian Barnes

A Tale of Two Cities
Charles Dickens
Back to Top